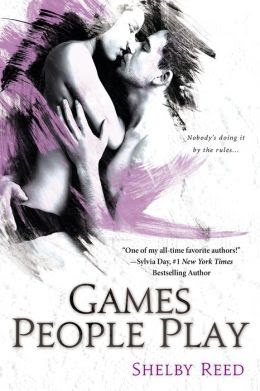 Warning: This book contains content that inappropriate for readers under 18 years of age. The excerpt may also contain graphic material and language.

What she’s wanted… Sydney Warren is a successful painter of erotic landscapes—just the artful fantasies of a woman whose own life has been stripped of passion. Though she has stayed loyal to her boyfriend, Max, he’s unable to ignite the sparks they once shared, leaving Sydney wanting. Then comes the stranger, a work of art himself, and everything changes. is what she’s getting… With chestnut hair, mesmerizing green eyes, and the perfect body, Colm Hennessy is every woman’s fantasy. He too is aroused, and more intrigued by the beautiful artist than he expected to be—because it wasn’t supposed to happen this way. For there’s something about Colm that Sydney doesn’t know... in the ultimate game of control. Colm is only pretending to be a model. He’s been hired by Max to seduce her—a twisted scheme to test her fidelity. But Max never imagined that Colm would feel something real. As Sydney and Colm’s intimacy grows, as passions neither expected are unleashed, the stakes in a cruel game are raised—and desire isn’t the only thing set to spiral out of control.

The first thing I think Shelby Reed did right with this book was giving the readers characters that were different. The heroine, Sydney, is an artist, who lets her fantasies out in her painting. Reed obviously knows her way around a paint palette. Her descriptions of Sydney and her work were exceptionally written and made Sydney realistic and creative. It was easy to see that Sydney has some deep passions that spread from her work to her life. Creative people are often very passionate people and I thought Reed wrote this character in a way that captured that almost like a painting on a canvas.

Colm was totally not what I expected. I had never written a book where the hero was a male prostitute. It gave this character such an angle that made the way he viewed life so fundamentally different than most male characters in erotic romance. Generally, you have the male character who is self-assured, perhaps a bad boy, or at least over confident. Colm was different. He had some hefty demons riding on his shoulders and it took a lot to bring him to a place where he could accept love. Reed does a masterful job of showing just what lengths someone would go to help someone they loved.

Another thing Reed did right was developing a premise or story line that was outside the box. Max, Sydney's boyfriend isn't quite sure she is marriage material. Can he really trust her? Most men would not stoop to putting a man in her path, whose soul purpose was to seduce her. Most men wouldn't take the chance of it backfiring. It was obvious that Max didn't have what Sydney needed yet she remained faithful to him. Would she falter? Reed makes the reader consider all the what if's that could happen with these three characters. I had the totally wrong idea of what would happen and I loved it.

This book was different. It was engaging and made me question what I would do in similar situations. I think Reed intended that. She was pushing the readers buttons with this one. Making them think of things they may not have thought of before in relationships. I liked how the story ended. It gave the reader a feeling of completion. The pacing was a little slow in the beginning but when it picked up it really moved well. Reed scores a hit with this one!

Games People Play is available NOW from your favorite bookseller.

At the age of ten, Shelby Reed wrote her first romance with Prince Charming — literally! — as the hero, and it’s been non-stop story spinning ever since.
Despite the idealistic place from which she embarked, she’s partial to writing realistic, flawed, multi-faceted characters, lush emotion, and the ever-possible happy ending.
When not pecking away at the computer keyboard, Shelby enjoys creative projects such as portraiture and decorating, dabbles in Tarot, and lives a bucolic life with her own Prince Charming in North Florida.