Review: The Return of Black Douglas

The Return of Black Douglas by Elaine Coffman
Publication Date: April 2011
Publisher: Sourcebooks
Genre: Historical Romance
Pages: Paperback, 448pp
ISBN-13: 9781402250743
ISBN: 1402250746
(Received for review from Sourcebooks)
Purchase: Barnes & Noble, Book Depository, IndieBound
Elaine Coffman on the WEB: Website, Facebook
Excerpt from The Return of Black Douglas
Synopsis (Book Blurb):
HE'LL HELP A WOMAN IN NEED NO MATTER WHERE SHE CAME FROM...
Alysandir Mackinnon rules his clan with a fair but iron fist. He has no time for softness or, as he sees it, weakness. But when he encounters a bewitching young beauty who may or may not be a dangerous spy, but is surely in mortal danger, he's compelled to help...
SHE'S ALWAYS WONDERED IF SHE WAS BORN IN THE WRONG TIME...
Thrown back in time to the tumultuous, dangerous Scottish Highlands of the sixteenth century, Isobella Douglas has a lot to learn about her ancestors, herself and her place in the world. Especially when she encounters a Highland laird who puts modern men to shame...
Each one has secrets to keep, until they begin to strike a chord in each other's hearts that's never been touched before...
Thoughts:
Elaine Coffman's time travel romance, takes readers back to the Scottish Highlands in the year 1515. The Return of Black Douglas is filled with handsome highlanders and strong, intelligent women who love them. Readers will find themselves escaping back in time right along with Isobella and Elizabeth. Coffman's ability to recreate the time period, customs and culture sets this novel apart from the rest.
Isobella Douglas is a hopeless romantic at heart. When she and her sister Elizabeth travel to Scotland to find out more about their ancestors, Isobella is drawn to the tragic story of Black Douglas. When she touches a portrait of Douglas in Boleyn Castle she and Elizabeth are transported through time back to the Scottish Highlands of old. When Elizabeth is captured by a ruthless clan, it is up to Isobella to convince Alysandir Mackinnon to rescue her. As Alysandir and Isobella begin to butt heads, they soon realize that their attraction is more than just a passing fling. Both having been hurt before, will they be able to trust each other and their hearts? Or will Black Douglas return once again to tear them apart?
This was a great time travel romance. There were so many good things about it. The fact that the author, Elaine Coffman took to heart the feelings of her fans in writing this book is exceptional. Coffman fans had long been asking her to write more about the mischievous ghost, Black Douglas and Coffman answered. Readers first met Black Douglas in the 2000 and will be happy to find that he hasn't changed his devilish ways. This time he brings twin sisters Isobella and Elizabeth along for the ride. I thought the author did a great job of showing Black Douglas as a fun-loving ghost with a taste for matchmaking.
Isobella Douglas wants nothing more than to find love. The problem is she feels like she was born in the wrong time. She wants a man like Mr. Darcy and they just don't exist in the modern world. After a failed romance she decides to swear off men, but the ghost of Black Douglas has other ideas when he puts in the path of Alysandir Mackinnon. Highland laird, fierce warrior and passionate lover, Alysandir is all she could want and more, but what happens when she has to go back to her own time. Is she in for a heartache once again? I loved Isobella's characters she was intelligent and spunky. She was as stubborn as the day is long and Alysandir really had his hands full with her.
Alysandir is loyal and caring. He takes his responsibilities seriously and he can't leave a damsel in distress to fend for herself. He is what every woman wants. Sexy and daring, but strong and courageous as well. He gives off an air of authority but he still shows his vulnerable side. He was married before, but it wasn't what he expected or wanted and he has sworn off woman, at least in the romantic sense, until he meets his equal in Isobella. Alysandir's character was so much fun to read about, his mannerisms and actions were surprising and very engaging. It was certainly a battle of wills between two stubborn people with Isobella and Alysandir, that will leave readers wanting more. I thought the author did a fantastic job of showing a romance between two very passionate people.
The time travel aspect of the story came across as believable and realistic. If a character is going to be transported back in time there has to be viable reason why and a vehicle for the change. Isobella cannot find the kind of man she wants in the modern world and Black Douglas becomes the catalyst to take her back where she can find someone who is everything she ever dreamed. I thought readers would find the story plausible and buy into the idea that the ghost caused it to happen and that he had a direct hand in what was going on. Coffman's descriptions of the time and the customs was remarkable and lent a sense of authenticity to the story. Her research must have been extensive and it's easy to see why readers love her writing so much.
I recommend this one to historical romance readers as well as those readers who love a good time travel romance. This one will really hit the spot if you enjoy books that make you feel like you are right there with the characters. I am of Scottish ancestry myself and I found the book to be spot on with the ideas and customs of the Highland people.
The Return of Black Douglas is available NOW from your favorite bookseller.
I'm giving this one 5 out of 5 apples from my book bag! 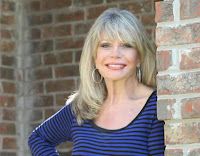 Since her first publication in 1988. New York Times bestselling author Elaine Coffman's books have been on the NYT, USA Today Top 5o and Ingram's Romance bestseller's lists, and have won four nominations for Best Historical Romance of the Year, Reviewers Choice, Best Western Historical, and the Maggie. She lives in Austin, Texas.
Posted by justpeachy36 at 9:00 AM