Review: The Season of Second Chances

The Season of Second Chances by Diane Meier

Publication Date: March 2011
Publisher: St. Martin's Press
Genre: Contemporary Fiction
Pages: Paperback, 320pp
ISBN-13: 9780312674113
ISBN: 0312674112
(Received for review from St. Martin's Press)
Purchase: Barnes & Noble, Book Depository, IndieBound
Diane Meier on the WEB: Website, Blog, Twitter
Excerpt from The Season of Second Chances
Synopsis (Book Blurb):
Every once in a while, when we least expect it, change comes into our lives and, if we let it, can set us free.
Sometimes, everything seems perfect on the surface. But her tenure at an Ivy League University, the publishing of her books, and an apartment with a view of the Hudson - if she hung out the window - never met the promise Joy Harkness had anticipated a life in New York City might bring. When change knocked at her door, Joy jumped at the chance. Still, what was she thinking when she said yes to a teaching opportunity that required leaving New York City and moving to western Massachusetts? And really, what was she thinking when she bought a run-down Victorian house she could have fit five of her old apartments into? It's like some other Joy Harkness temporarily took over her life. This life, complete with women who want to be her friends, men who want to date her, children and animals who seem to need her, and a talented, emotionally stunted handyman who wants to turn her white elephant into a real home, this life doesn't seem to fit Joy at all. Or is it that Joy's been searching for this without knowing it - until it found her?
Thoughts:
Diane Meier's book, The Season of Second Chances is a story about self-discovery and beginning the life you've always wanted to lead at any age. Meier has created a character in Joy Harkness that will remind readers of what their dreams were and what they wanted out of life and shows them the possibility of what life could be. This is a book that embraces change, even when it's difficult and hard to adjust to. Readers will fall in love with Joy and struggle to find her way to a better life.
Joy Harkness has the perfect life. A professorship at a prestigious college, a published book, a gorgeous New York apartment. What more could she want? Joy is removed from the people around her, without many friends and no real love interest in her life. She has also kept up a wall between herself and the outside world. Is this the life she dreamed of? When the opportunity to make a change comes her way she jumps with both feet. Taking a job at Amherst in Massachusetts, buying her first home, a major fixer-upper and becoming a part of something more, something meaningful. Joy's journey to discovering the kind of life she was meant to live, is filled with friendship, romance and family. Has she finally found her place in this world?
After reading The Season of Second Chances I found myself relating back to my own experiences in my life. Diane Meier has crafted a novel that women will fall in love with as they travel with Joy on her journey to find out where she fits in the scheme of things. I think we are never too old or too far removed to change the circumstances in our lives. To change the focus or the direction we are heading. I think Meier's book really brought that idea to the forefront. It's never too late.
As a character, Joy Harkness personifies the longings of many woman to seek a different life for themselves. I liked the way the author portrayed Joy as a woman who wanted change, but still had a hard time accepting certain aspects of it. She wanted friends but it was hard for her to get into the whole friendship thing. She uncomfortable for awhile, getting into the swing of things, but I think she learned a lot about herself and what she wanted during that time.
Her relationship with the men in her life was different. She really wanted find love, and when she was faced with many choices on that front she seemed almost stunned. I wasn't too keen on the way Joy thought about sex. But I also related to her thinking in a way. Love and sex are two different things and I think the author explored that a little bit through Joy's attitudes. She could have chosen Will, who was only in it for one thing, which would have been an easier choice or Teddy who required more than just a casual relationship. I thought that Teddy really added a lot of depth to the book and his character was so three-dimensional. He had a lot of layers for Joy to work through. Meier did an excellent job of making even the secondary characters necessary in this novel. She made them as real to the reader as the main characters.
The old Victorian house that Joy bought was my favorite aspect of the book. It was such an important part of the story that it almost took on the feeling of being a character in it's own right. As the house began to take shape under Teddy's watchful eye, Joy's life began to take shape as well. As she picked out paint and flooring she was also changing her attitudes and her actions. She took on the responsibility of making the house a home and with it came lots of other responsibilities like f

our girls who really needed her in their life. I just loved how the author used the house to show the changes that were taking place in the life of the main character.
The Season of Second Chances in available from your favorite bookseller NOW.
I'm giving this one 4 out of 5 apples from my book bag! 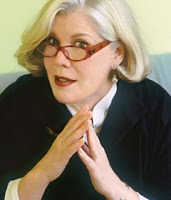 Diane Meier is the author of The New American Wedding and president of Meier, a New York City based marketing firm. Her career spans from writing and design to public speaking. This is her first novel. Meier lives in New York City and Litchfield, Connecticut.
Posted by justpeachy36 at 5:00 PM