(Received for an honest review from Ace Fantasy) 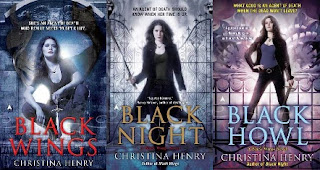 
MADELINE BLACK IS AN AGENT OF DEATH, MEANING SHE ESCORTS THE SOULS OF PEOPLE WHO HAVE DIED TO THE AFTERLIFE. BUT LATELY, SOME SPIRITS DON'T FEEL LIKE CROSSING OVER...


Something is wrong with the souls of Chicago's dead. Ghosts are walking the streets, and Maddy's boss wants her to figure out why. At the same time, the pact that Maddy unwittingly made with the local werewolves comes back to bite her when their alpha is kidnapped. As Lucifer's heir, she should be able to discover who - or what - is responsible for both occurences, but the fallen haven't been too happy with her since she agreed to harbor Gabriel's half brother, Samiel.


And while work is bad enough, Maddy has a plethora of personal problems, too. Now that Gabriel has been assigned as her thrall, their, relationship has hit an impasse. At least her sleazy ex-fiance, Nathaniel, is out of the picture - or so she thinks...


Christina Henry continues the Black Wings series with her latest book, Black Howl. This is an emotional roller-coaster of a book, which will have readers moved to tears, as well as, laughing with slap-stick style one-liners. Henry's trademark wit and sarcasm definitely add fuel to the fire in this one, giving readers an urban fantasy that is a little lighter than the average genre fare. Henry's ability to write an unpredictable plot is well showcased as readers will be on the edge of their seats and clamoring for more at the end of this one.

Black Howl is the third book in the Black Wings series featured Maddy Black, agent of death and Lucifer's heir to the throne. Maddy has two mysteries to solve in this one as well as a plethora of personal issues. Henry has a way of writing that engages the reader completely and I thought it was very apparent in this book. It is a crazy mix of emotions and completely unpredictable, which made it hard to put down because you were never sure what was going to happen next. It is probably a good idea to read this series in order, even though this one could be read as a stand alone, because Henry does draw from the previous two books, throughout this one from characters to situations that occurred before this books time line.

Maddy is charged with figuring out, not only why Chicago's dead are more than a little restless these days, as well as, what has happened to the Alpha from the local werewolf pack and his cubs. The way these two events tie together is amazingly complicated and I thought Henry did a masterful job of keeping the reader off balance for the duration of the book. The mystery aspect of the story does however take a back seat to the emotional and personal issues that Maddy faces in this book. Her relationship with Gabriel is more intense and more confused than ever. Her love life is quite the mess, but she has some very loyal friends and companions that keep her grounded and help her with just about everything.

If you are a reader who likes a good cliff-hanger, this book is for you! It gets to nail biting time in the end of this one and readers will be knocked for a loop at the ending. Henry certainly knows how to end a book with a bang and keep those readers wanting more. She ends this book in such a way that not many readers will be able to resist the temptation of reading the next one in the series.

I thought Henry's characters were well drawn and her plot was interesting. She excels at using humor and wit to give the book a bit of comic relief which is rare in this genre. She does use some tried and true urban fantasy patterns like forbidden love and a magically related solution, but she uses them in such a way that don't take away from the story, but only enhance the outcome. This is definitely a good addition to this series. It shows the growth of the main characters while adding details to the backstories of others. It's urban fantasy with a lighter feel. I quite liked it.

Black Howl is available NOW from your favorite bookseller.

Christina Henry is a graduate of Columbia College Chicago and enjoys running long distances, reading anything she can get her hands on and watching movies with subtitles in her spare time. Christina used to work in a comic-book store and, as a result, has boxes of bagged and boarded comics in her attic. Needless to say, she can hold her own in a conversation about manga and anime. Christina lives in Chicago with her husband and son.
Posted by justpeachy36 at 10:30 AM