(Received for an honest review from Dutton) 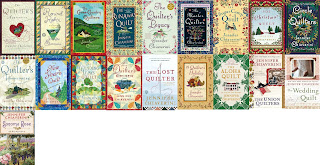 From New York Times bestselling author Jennifer Chiaverini, a powerful and dramatic Prohibition-era story that follows the fortunes of Rosa Diaz Barclay, a woman who plunges into the unknown for the safety of her children and the love of a good but flawed man.

As the nation grapples with the strictures of Prohibition, Rosa Barclay lives on a Southern California rye farm with her volatile husband, John, who has lately found another source of income far outside the federal purview.

Mother to eight children, Rosa mourns the loss of four who succumbed to the mysterious wasting disease that is now afflicting young Ana and Miguel. Two daughters born of another father are in perfect health. When an act of violence shatters Rosa's resolve to maintain her increasingly dangerous existence, she flees with the children and her precious heirloom quilts to the mesa where she last saw her beloved mother alive.

As a flash flood traps them in a treacherous canyon, only one man is brave-or foolhardy-enough to come to their rescue: Lars Jorgenson, Rosa's first love and the father of her healthy daughters. Together they escape to Berkeley, where a leading specialist offers their only hope of saving Ana and Miguel. Here in northern California, they create new identities to protect themselves from Rosa's vengeful husband, the police who seek her for questioning, and the gangsters Lars reported to Prohibition agents-officers representing a department often as corrupt as the Mob itself. Ever mindful that his youthful alcoholism provoked Rosa to spurn him, Lars nevertheless supports Rosa's daring plan to stake their futures on a struggling Sonoma Valley vineyard-despite the recent hardships of local winemakers whose honest labors at viticulture have, through no fault of their own, become illegal.


Jennifer Chiaverini once again brings readers a novel that shifts from the present to the past with ease. Sonoma Rose is somewhat different from Chiaverini's usual fare and delves into some serious issues including domestic violence and women's suffrage. Set during the Prohibition era this novel is both educational and entertaining. Readers who follow the Elm Creek Quilter's series may be a little surprised at the Chiaverini's direction with the series, but new readers will probably be very interested in where she's going.


This is one of those reviews that is somewhat difficult to write. My first experience with Jennifer Chiaverini's writing was with the last Elm Creek Quilt's book, The Wedding Quilt, which I really enjoyed. I found the characters interesting and full of life, the setting descriptive and the plot detailed and well written. I mentioned in my review of that book that I thought the author was taking a new direction with the series, tying up loose ends and moving on. From the tone of Sonoma Rose I'm sure that was indeed the case.

Sonoma Rose takes readers back in time to the Prohibition era. There were parts of this book that I liked, including the descriptions of the day to day lives of those living and working in a vineyard. Details about the wine business and how it survived the era were well researched and written. But there was a lack of continuity about this book. The particular series is considered a "quilting" series. Much of the storylines in previous books deal with quilting in some way, however with Sonoma Rose, the main focus is wine-making. It was a departure from what fans expect from Chiaverini's books and I'm afraid it will probably not go over well.

I admit that I was a little disappointed that Chiaverini chose to mention the Elm Creek Quilter's very little in this novel. It seemed as though she was struggling to create a new bunch of characters and completely got away from her old ones instead of transitioning them out of the story. Rosa was a good character but she didn't really garner the sympathy you might expect for someone in her predicament. Don't get me wrong... I love Jennifer Chiaverini's writing and in and of itself this book was good, but it was just too much of a change to still be considered a part of this series. Perhaps it would have been better to term this one a spin-off or something like that. It would have made more sense and went over better with readers.

I appreciate the fact that the author isn't afraid to tackle the hard issues. In Sonoma Rose, Chiaverini takes on domestic violence, women's rights and the grey areas between what's right and what's wrong. The book showed potential but it felt more like the first book in series, that promises something more instead of the 19th book in a series. There were good points and bad points about this one and I advise you to take this review with a grain of salt. Make your own decision. If you've enjoyed the other books in the series, you might like this one, but be prepared for some big changes.

Sonoma Rose is available NOW from your favorite bookseller. 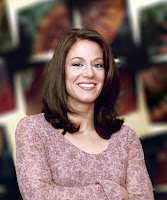 Jennifer Chiaverini is the author of fourteen Elm Creek Quilts novels, as well as three collections of quilt projects inspired by the series, and is the designer of the Elm Creek Quilts fabric lines from Red Rooster Fabrics. She lives with her husband and two sons in Madison, Wisconsin.
Posted by justpeachy36 at 9:30 AM