Sarai (Wives of the Patriarchs - Book 1) by Jill Eileen Smith

He promised her his heart. She promised him a son. But how long must they wait?

Sarai, the last child of her aged father, is beautiful, spoiled, and used to getting her own way. Even as a young girl, she is aware of the way men look at her, including her half brother Abram. When Abram finally requests Sarai’s hand, she asks one thing–that he promise never to take another wife as long as she lives. Even her father thinks the demand is restrictive and agrees to the union only if Sarai makes a promise in return–to give Abram a son and heir. Certain she can easily do that, Sarai agrees.

But as the years stretch on and Sarai’s womb remains empty, she becomes desperate to fulfill her end of the bargain–lest Abram decide that he will not fulfill his. To what lengths will Sarai go in her quest to bear a son? And how long will Abram’s patience last?

Jill Eileen Smith once again brings the Old Testament to life in her new Wives of the Patriarchs series. The first book in the series, Sarai is based on the Biblical account of Abraham and Sarah and their struggles to conceive a child. Smith uses rich period detail and emotional and spiritual insight to bring this story to the reader. Readers will see Sarai and Hagar in a new light and sympathize with their plights. A great fictional rendering of a one of the Bible's greatest stories!

I first became acquainted with Jill Eileen Smith's writing with her Wives of David series which is still one of my favorites. Smith is very gifted when it comes to characterization. If you think about it, it's a daunting task to take characters that are considered sacred and build backstories and voices for them. In Sarai, Smith is taking the well known story of Abraham and Sarah and showing it to readers in a much more intimate way.

When reading the Biblical account of this story, the focus is primarily on Abraham. The only thing we really know about Sarai from the story is that she was barren, that she gave Abraham her maid Hagar in order to provide him an heir and that she laughed when God said he would give her son in her old age. It also mentions that she eventually had Abraham send Hagar and her child away, which alludes to the fact that she was jealous of Hagar, but the Bible doesn't tell us much more about Sarai. Smith says very true to the Biblical telling of the story, but she adds details about Sarai's personality, her feelings, what was going through her mind. It is a very compelling view of a woman that many people know of, but really know very little about.

Smith's character Sarai, is a woman that many readers will find resonance with. She made a promise to give Abram a son, a promise that she had no idea would be that difficult to keep. I think as Christians and as people we often make vows or promises that we think we can keep, but we really don't know for sure. This story always illustrated the fact that vows and promises to God or others is a very serious thing. We must be careful not to make promises we don't know if we can keep. That generally comes back to haunt us in the long run.

Sarai also struggles with the fact that she is barren. Smith clearly shows that during this time period, if a woman could not produce a child, she was looked down upon, pitied and even degraded. That was the purpose of a woman, to bear her husband children and Sarai really has trouble with this. She is a very beautiful woman, yet she is considered unworthy because she has no children. Today's society isn't like that, but I think there are many women who can relate to the fact that not being able to have a child is devastating in many ways. I liked how Smith dealt with the issue and showed the lengths that Sarai went to, to give Abraham a child.

Sarai's jealousy of Hagar is also something women often understand. Even though Sarai loved Abraham so much that she was willing to give him her maid Hagar so that he would have a child, she still resented the fact that she had to do that. She wanted that child to be hers and in all reality it wasn't. She believed that Abraham would love Hagar and her child more. Sarai is shown as a real woman, with real struggles. She wasn't as committed to God as Abraham was, she questioned her faith, her decisions and even her own heart at times and Smith truly brings her life in this story. It was powerful rendering of an age-old tale that I think readers will really enjoy.

Though I wished Smith had taken readers through Sarai's pregnancy and the birth of Isaac, I still loved every page of this book. It was intense and showed Sarai more as real woman, that a character in a Bible story. I think it is so important that these kinds of stories be told. A book of this kind may reach a person who would never pick up a Bible. It is a very powerful tool that I think Smith understands and uses it to get her message of God's grace across to readers from every background and way of life. If you love the old Bible stories and accounts of what God was doing before the birth of Christ, this is definitely a book for you! I really enjoyed it and I think you will too!

Available March 2012 at your favorite bookseller from Revell, a division of Baker Publishing Group. 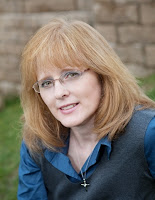 Jill Eileen Smith is the author of the bestselling Michal, Abigail, and Bathsheba, all part of The Wives of King David series. She has more than twenty years of writing experience, and her writing has garnered acclaim in several contests. Her research into the lives of biblical women has taken her from the Bible to Israel, and she particularly enjoys learning how women lived in Old Testament times. Jill lives with her family in southeast Michigan.
Posted by justpeachy36 at 9:30 AM

I just won this one on another blog today! I can't wait to read it, as I do love biblical re-tellings. Great review Debbie!

I've seen Smith's Wives of King David series around and am excited that she's tackling Wives of the Patriarchs now. I am drawn to the stories in the Bible featuring women and I really enjoy getting to see them fleshed out and come to life in different ways for me.

Jill Eileen Smith is definitely one of the best authors I have seen take on Biblical retellings. Another author that excels at that is Mesu Andrews, you should try some of her work as well.