Synopsis (Book Blurb):
A corrupt judge in a mob murder case. A disillusioned pastor, hungry for power. A cynical reporter, sniffing for scandal. A gambling addict whose secret tape threatens the lives of everyone who hears it.
New York Times bestselling author Lee Strobel weaves these edgy characters into an intricate thriller set in a gleaming suburban megachurch, a big city newspaper struggling for survival, and the shadowy corridors of political intrigue. The unexpected climax is a gripping as the contract killing that punctuates the opening scene.
Thoughts:
Bestselling non-fiction writer Lee Stobel takes a different route with his first work of fiction. Drawing on his experience as a Chicago reporter, Strobel brings readers a gripping and suspenseful legal thriller that will change the face of Christian fiction. Strobel will have readers on the edge of their seats with The Ambition, as well as thinking deeply about the issues brought up in this book. Stobel's ability to create edgy characters mixed with his straight forward style make this a must read!
The Bugatti brothers, mobsters and all around desperate criminals are using bribes and coercion to get a murder case steered to just the right judge, Reese McKelvie. McKelvie is candidate for a vacated U.S. Senate seat and the brothers believe a payoff is in order to get the outcome they want. Eric Snow is also a candidate for the Senate seat. Snow is a powerful but disillusioned pastor of a megachurch in Chicago. As Snow's congregation grows his political ambitions rise just as quickly. He comes under scrutiny from a Chicago reporter when the reporters girlfriend, a member of Snow's congregation moves out because of her religious convictions. Garry Strider knows there is something more than meets the eye going on at that church he just has to find it. He unexpectedly puts himself in the middle of a political drama that he may be unable to get out of...
Lee Strobel is the highly acclaimed author of the non-fiction investigative series which includes, The Case for Jesus. Strobel has striven throughout his career to prove the existence of Christ to those who doubt and now he has turned his pen to fiction. Long-time Strobel fans will be thrilled that he has branched out into a different area. He uses his straight forward, in-your-face style to give readers a book that not only entertains but also carries a message that some may never be exposed to through other genres. Strobel's in depth knowledge into the world of a reporter give this book an authenticity that readers will pick up on. He not only knows the jargon but has walked the beat.
When most readers, including myself, think of Christian fiction, legal thrillers, probably don't come to mind. This is an area of the genre that is recently becoming more popular. Thrillers and suspense from a Christian perspective is a new and exciting area for me, as a reader. In the past I have read mostly Christian historical romance and there tons of those out there, but the rarely have the kind of definition and clarity that Lee Strobel's book has. The Ambition is very gritty and full of edgy, interesting characters. Strobel shows the reader a different kind of Christian Fiction. This book will appeal to not only Christian fiction readers but also mainstream thriller readers, which is the entire point, opening it up to a broader and more expansive audience.
I think readers will really appreciate Strobel's ability to give them characters that are well developed and three dimensional. He weaves their stories together in such a way that readers will be on the edge of their seats wondering what is going to happen to them next. One of the hallmarks of a good thriller is that very suspenseful feeling you get when you are reading it. Your heart speeds up a little bit when the danger is greater. You get that feeling of satisfaction when the hero or heroine makes it through another tight situation. This book has all of that and a lot more. The reader will find themselves becoming invested in these characters and wanting to understand their motivations and reasons for doing things.
This is an excellent book, with a very fast pace. The ending seemed a little rushed but not extremely. Sometimes I think it is difficult for a writer to let go of the characters that have become a part of their lives. Strobel is just such a powerful writer. Strobel fans will love this one and I think he will garner a whole new following with this foray into fiction. I look forward to more!
The Ambition is available NOW from your favorite bookseller.
I'm giving this one 5 out of 5 apples from my book bag! 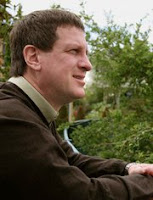 Lee Strobel is an award-winning legal editor of The Chicago Tribune and a New York Times bestselling author. After years of non-fiction bestsellers, he is publishing his debut fiction novel, a legal thriller. Lee is a Yale Law School graduate, accomplished journalist, and renowned speaker.
Posted by justpeachy36 at 9:58 AM