Review: Disciple of the Wind 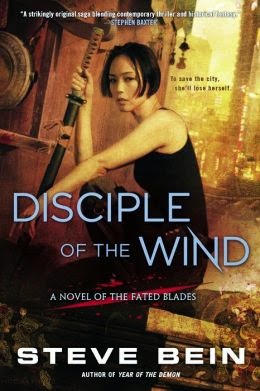 Disciple of the Wind (Fated Blades - Book 3) by Steve Bein

1. Daughter of the Sword
2. Year of the Demon
3. Disciple of the Wind 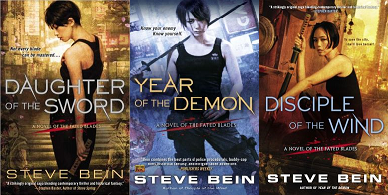 LETHAL JUSTICE
When Tokyo falls victim to a deadly terrorist attack, Detective Sergeant Mariko Oshiro knows who is responsible, even if she doesn’t have proof. She urges her commanding officers to arrest the perpetrator—an insane zealot who was just released from police custody. When her pleas fall on deaf ears, she loses her temper and then her badge, as well as her best chance of fighting back.
Left on her own, and armed with only her cunning and her famed Inazuma blade, Mariko must work outside the system to stop a terrorist mastermind. But going rogue draws the attention of an underground syndicate known as the Wind. For centuries, they have controlled Japanese politics from the shadows, using mystical relics to achieve their nefarious ends—relics like Mariko’s own sword and the iron demon mask whose evil curse is bound to the blade. Now the Wind is set on acquiring Mariko.
Mariko is left with a perilous choice: Join an illicit insurgency to thwart a deadly villain, or remain true to the law. Either way, she cannot escape her sword’s curse. As sure as the blade will bring her to victory, it also promises to destroy her….

Steve Bein's Fated Blades series, continues with Disciple of the Wind. This is really, really good Urban Fantasy. It combines a police procedural with mythology and Japanese history and also has a streak of magic in it, complete with mystical Japanese swords. Bein's lead character Mariko defies stereo-types and kicks some serious butt. Be it cop or rogue, she is one amazing heroine! Readers who enjoy urban fantasy will love it and if you're new to it, this is a good place to start.

I don't even know where to start with what I liked about this one, there is simply so much that I could talk about. First of all, I read a lot of urban fantasy, though that is not the prevailing theme of my blog, it is one of my favorite genres for personal reading. Urban fantasy is different from Paranormal Romance, because there is often no romance at all or very little. The focus is on the paranormal more so than romance. It is a lot about strong characters with magical influences, strong themes and tends to be a little darker and more edgy. Steve Bein's is a writer who understands those differences and uses them to his complete advantage.

In Disciple of the Wind readers get a gritty, raw reading experience that takes things like magic and mythology and makes them more accessible and realistic than a book based on romance does. I quite frankly, haven't read too many urban fantasy titles that are based in the Japanese culture and I was completely sucked in by this one. I loved everything from the cover, to the blurb on the back. Bein uses a deft hand with his characters and he blends the past a present in a way that makes sense to me as a reader. It shows the importance of history and how that history can affect the present. Just an amazing use of historical background!

Mariko is a heroine like few others I have ever read. She is driven, hot tempered and the wielder of a magical sword that would be the envy of any superhero. She has a strong sense of duty and what is right and wrong. Being a cop she has to deal with a lot of politics about what she can and can't do. Being a rogue she still has to worry about outside influences that can pollute her quest for justice. She was magical in every way. She kicked butt and took names all in the name of fighting terrorism in present day Japan. An amazingly written character that readers will not soon be able to forget.

The parts of Mariko's story that deal with the imminent attack on Tokyo are largely written like a police procedural. Those can get a little boring at times in my opinion but not this one. I loved all of the discussion about the Wind and how their form of justice was different from Mariko's ideas. Good stuff! The action is fast paced and never lets up. But the reader gets a breather when the author goes back to the past with the quest of Diagoro and his mission to find the mystical sword. The Japanese history and legends that Bein tells the reader about give this book a feeling of being on a hero's journey. I am a big fan of history and legends and this part really sang to my soul. Very well written and with exceptional attention to detail. Everything worked so well together and past and present blurred in a sense. Great writing!

This was just a fantastic book! One of my favorites of the year in this genre. Can't say enough good things about it. Excellent characters, remarkable use of blending the past and present, an urgency that pervaded the book, but with sequences that slowed it down just enough. So much that I loved about this one. I didn't want this one to end, but the ending was so well crafted that I wanted to skip to the back just to experience it. How many books can you say that about? Wow! That's about the best way to sum it up. I want more, quickly...lol!

Disciple of the Wind is available NOW from your favorite bookseller. 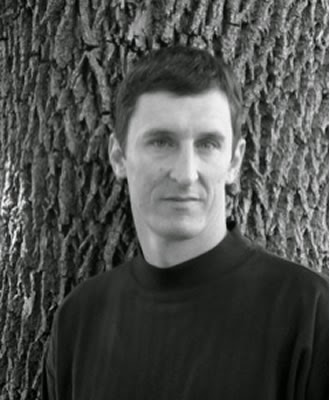 Steve Bein teaches philosophy at Texas State University. He has a PhD in philosophy, and his graduate work took him to Nanzan University and Obirin University in Japan, where he translated a seminal work in the study of Zen Buddhism. He holds black belts in two American forms of combative martial arts and has trained in about two-dozen other martial arts over the past twenty-odd years.His short fiction has been published in Asimov's, Interzone, Writers of the Future, and has been anthologized for use in college courses alongside the works of such figures as Orson Scott Card, Larry Niven, Isaac Asimov, and H.G. Wells. His Novels of the Fated Blades include Daughter of the Sword, Year of the Demon, and Disciple of the Wind.
Posted by justpeachy36 at 9:00 AM