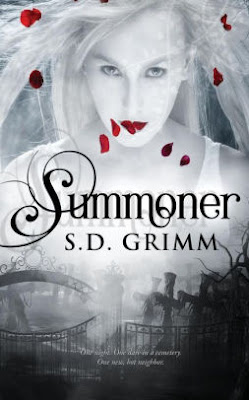 (Received for an honest review from Entangled Teen)

Excerpt from Summoner by S.D. Grimm courtesy of Amazon's Look Inside feature

When Allie’s best friend dares their group to play a game in a cemetery—something she calls Dzwitchingdz—Allie never expects what it might mean for her. When she plays, she doesn’t just find bodies, she summons their souls. But one soul wants more than Allie is willing to give.
And the boy next door could be the key to saving her.
Cody Burkhart. Straight from Montana, cowboy hat wearing, and smoking hot, he’s just the thing to help Allie become Dznormaldz again after the death of her mother. And as her newly appointed Guardian, he’s also just the thing to help Allie ward off the vengeful spirit who’s after her soul. Except Cody has his own demons to slay that keep him closed off. But as the full moon approaches, so does their only chance to break the curse, and Cody will have to make the biggest sacrifice of all.

The newest book by author S.D. Grimm is a combination of the paranormal and a young adult romance. This ain't your mama's scariest ghost tale but it does have some witching, divining, a spirit summoner and a guardian that might catch your interest. Grimm's coming of age story delves into some complex story elements, like inner demons and grief. Readers looking for something different as the fall season gets underway will find this title right up their creepy alley.

S.D. Grimm is a new author for me, so I was, as usual, a bit skeptical going in. There are so many titles in the paranormal and fantasy genres that are repetitive and just run of the mill. Grimm does and excellent job of giving readers a refreshing take on an old staple, the ghost story. Divining for water, I've heard of, divining for bodies? That's a new one!

I liked the whole cemetery scene in the beginning of the book a lot because it started showing the reader the world that Grimm was going to build. It introduced the reader to what a 'summoner' is and how it would effect the story. I thought Grimm did a great job getting the scary vibe going, but also in introducing the lead character, Allie.

Allie is a young girl dealing with the loss of her mother from Cancer. Unfortunately, something that has touched many of our own families. I thought Grimm's take on grief and loss was poignant and compelling. Survivor's guilt is a real thing no matter what type of situation it is. Grimm allows the reader to see inside Allie's struggle and how she eventually made it back to herself. I liked that the author didn't just sweep it under the rug. This is something that stays with you.

Allie finds out that her next door neighbor Cody may hold the key to getting her out of a potentially sticky situation with the spirit she divines completely by accident. Cody is a guardian and a very interesting one at that. He has his own inner demons and is dealing with life with a disability after losing his hand. I loved the fact that Grimm gives the reader an unorthodox hero. Cody may not seem like the perfect demon slayer but he shows that no matter your adversity you can overcome.

When I got this title to review I was expecting a spooky tale just in time for the fall season to begin. I tend to read titles that are a bit ghostly this time of year. Though this story started out that way, it became more of romance in the end than a paranormal tale. There was nothing wrong with the romance but I think it would have benefited from having the creepy factor ramped up a bit.

In the beginning Allie is just becoming more active and inclusive with her friends again after the loss of her mother. Obviously grief changes you. She was taking her life back and she had people in it that mattered to her. Unfortunately, that got a little lost as the story went on and we heard nothing about her friends and more and more about just Cody. I wanted some back story on the people she had in her life. I wanted them to play a bigger more important role than just the first scene of the book.

This was a good story. The romance is sweet and tender and I liked both the male and female lead. I loved the way the author handled the ideas of grief and inner demons. Her use of an unorthodox and compelling hero was very well done. But I wanted a little more creep for my buck. Ghosts are scary.Don't let me forget about that along the way. Wish the momentum from the first scene in the graveyard had carried throughout the tale. And if you introduce me to someone as a side character, I want them to have a place in the story. I don't want to wonder if they are going to appear anywhere else in the story, I want to know they will.

Summoner is available NOW from your favorite book seller.

I'm giving this one 4 our of 5 apples from my book bag.

S. D. Grimm’s first love in writing is young adult fantasy and science fiction. That's to be expected from someone who looks up to heroes like Captain America and Wonder Woman, has been sorted into Gryffindor, and isn't much taller than a hobbit. Her patronus is a Red Voltron Lion, her spirit animal is Toothless, and her lightsaber is blue. She believes that with a little faith, a lot of love, and an untamed imagination, every adventure is possible. That's why she writes. Her office is anywhere she can curl up with her laptop and at least one large-sized dog. You can learn more about her upcoming novels at www.sdgrimm.com
Posted by justpeachy36 at 10:00 AM