Review: Island Beneath the Sea 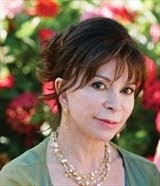 Aristocratic Chile is vividly evoked in Isabel Allende's lyrical novels, in which a family's past and future is linked inextricably with that of it's country's. A writer whose dreamy, imagistic books transport the reader to another time and place Allende is considered by many to be the heir to Gabriel Garcia Marquez's lavish magic realism.
Posted by justpeachy36 at 11:22 AM

Thank you for the video. I have heard her talk on t.v. I luv to hear Isabel Allende talk. Thank you.

So powerful, thank you so much.

It's been a long time since I've read a book by Allende, but you've made me want to run out and pick this one right up! Fantastic review. Thanks for being on this tour!

Thank you for this wonderful review. Island Beneath the Sea sounds like Isabel Allende at her best! After reading your review, I'm looking forward to reading Tete's story!