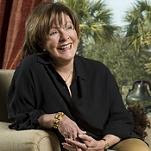 The South Carolina coast forms a lush backdrop for Dorothea Benton Frank's tales of cheatin' husbands, nosy neighbors and nutty families. But don't let the sand and palm trees fool you; Frank's very funny novels are smarter than the average beach read.
Posted by justpeachy36 at 11:08 AM

It's hard when you don't love a sequel as much as the original, but I appreciate that you're still a fan of the author and that you'll read more by her in the future - that's definitely saying something.

Thanks for being on the tour.