Kate Sutherland always felt out of place in brash and modern Southern California. But when she comes to her ancestral home in the Shetland Islands to seek a mystical guide who may shed light on her true heritage, she is caught between the present day and visions of a life from five centuries past....

A fiery young woman of royal English blood, Catriona Wells is determined to save her family from the deadly political clashes of 15th-century Britain. But Cat's cunning is no match for Scottish border lord Patrick MacKendrick. When this powerful warrior betroths her against her will, Cat must decide whether she dares to love him--and to trust him with lives that are more precious to her than her own.

Historical romance writer, Jeanette Baker is re-releasing her novel Catriona to a new audience. Originally titled, The Bold Deceiver, Catriona is a book full of secrets and past lives. Baker's writing will appeal to readers who are fans of historical romance, historical fiction and the paranormal. She weaves the three together to create a novel that is surprising and full of adventure. From Wicca to reincarnation, this book touches on the legends and tales of Ireland and Scotland. A great summer read for the historical reader!

Kate Sutherland has the "sight" and she doesn't know what it is or what to do about it. When she decides to fulfill the dying wish of the woman who raised her, Kate isn't prepared. She mistakenly thinks that returning to her ancestral home in the Shetland Islands, may cure her of her foreboding visions, but the feelings and dreams only get stronger. Since she found out she was adopted she has had many questions that can't be answered. She enlists the help of a local historian to try to help her understand what's happening to her, but Niall MacCormack is bringing up more questions than answers. Her visions are of one of her ancestors Catriona Wells. Catriona's younger brother is accused of treason and she would do anything to help him, even marry the ruthless Patrick MacKendrick. Kate's future depends on setting Catriona's past to rights. But can she choose between this life and one from long ago?

Jeanette Baker knows how to tell a story. She is one of those writers who tugs at the mind as well as the heartstrings with her historical romances. She is able to shift back and forth through time with ease and engage the reader in both stories she is telling. In Catriona, Baker shifts between the present day world of heroine Kate Sutherland and the 15th century world of Catriona Wells, a young royal. Baker shows a tremendous amount of versatility as she effortlessly conveys to the reader how Kate becomes intertwined with Catriona and what makes their connection possible.

She touches on reincarnation as well as the early teachings of the Pict and Druid religions. I liked the fact that there was a supernatural feeling about this book. It gave off an air that reminded me of stories my Scottish grandfather used to tell when I was a child. Being of Scottish ancestry, it is always interesting to me to see how authors treat Scottish history and legends and I think Baker does a wonderful job of showing reverence and respect to the people and the customs of the day. Right down to the styles of clothing and the kind of food that was served. I thought she went into great descriptive detail and that made all the difference. It seemed authentic and original at the same time.

Of the two women, I was most drawn to Catriona and her story, being a former history major, I tend to enjoy characters that come from an earlier time period and I really liked Catriona. She was a young woman put in a bad situation. She is willing to do just about anything to save her brother, even marry a man she doesn't know if she can love. I thought she was loyal and resourceful and showed a lot of passion. Kate on the other hand came across as a little too straight laced for my tastes, but she was still interesting and once she understood what was going on with Catriona she was willing to try to help her. Both characters were well written and Baker does a great job of bringing them both to life.

I recommend this book to readers of historical fiction and romance, and there is even a bit of the supernatural or magical elements to tempt the paranormal reader. Baker writes a very tight and passionate book. Her characters live hard and with lots of emotion. Her time slip style of writing is fun to read and engaging. The reader practically gets two stories for the price of one in this one and it's not one they'll want to put down very easily either. Fast paced, full of interesting ideas, and just in time for those days when the kids are back in school and you want something rich and decadent to read!

Catriona is available NOW from your favorite bookseller. 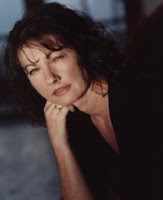 Author of fifteen novels, including the RITA Award-winning paranormal, Nell, Jeanette Baker has been hailed by Publisher's Weekly as a forceful writer of character and conflict whose novels are "irresistible reading." She graduated from the University of California at Irvine and later earned her master's degree in education. Jeanette lives in California during the winter months where she teaches literature and writing and in County Kerry, Ireland, during the summer.