The Landlord's Black-Eyed Daughter by

Excerpt from The Landlord's Black-Eyed Daughter

Elizabeth Wyndham is a rarity-a young lady who writes novels-bestsellers in fact. But with her sharp tongue and quick temper, she's nothing like her vapid, charming heroines.

Rand Remington is an ex-soldier disillusioned with England's less-than-honorable nobility. By day a gentleman, by night he robs the rich to try to make life better for the poor.

Rand and Elizabeth are drawn inexorably together, until the fateful night when the men trying to capture Rand use Elizabeth as living bait...Based on the beloved poem about two timeless lovers who would die for each other...

Author Mary Ellen Dennis pays homage to Alfred Noyes's iconic poem, "The Highwayman", in her novel, The Landlord's Black-Eyed Daughter. Dennis bases her novel loosely on the poem and gives readers an engrossing historical romance set in the Georgian period. With everything from high speed chases to kidnapping, readers are treated to a historical romance with an added dose of adventure.

Elizabeth Wyndham is a Gothic romance writer and a self-proclaimed spinster. But when her father's inn gets into financial difficulties he decides it is in his best interest to marry her off to the local constable, Lord Walter Stafford. But Bess isn't about to go quietly. When she meets a man that reminds her distinctly of one of the heroes from her books, she isn't sure what to make of him. John Randolph Remington is an ex-solider, with a chip on his shoulder. When he begins to read some of Elizabeth's work he realizes that her stories mimic the disturbing reoccurring dreams he has had for years. They are somewhat intertwined and it will take more than his nightly missions as a highwayman or Stafford's interference to keep them a part.

"The Highwayman" by Alfred Noyes was always one of my favorite poems from school and I was excited when I was able to get the opportunity to review a book that was based on the poem. I'm not exactly sure what I was expecting, but a historical romance with a paranormal bent, didn't cross my mind LOL! I was definitely surprised by the supernatural influences in the book, but pleasantly so. I have not read much about reincarnation or past lives and I found it an interesting idea. I thought Dennis approached it in a thoughtful way that allowed the reader to make their own conclusions.

I also thought that Dennis took on some social issues in the book that made it even more interesting. Social injustice was very prevalent in the Georgian time period and I thought Dennis was able to convey that well to her readers. Rand's way of speaking out against the injustice was to take from the rich, he didn't necessarily give it to the poor as a would-be Robin Hood, but he felt it was owed to those less fortunate. Dennis also took on the role of women in the era. Bess was certainly not conventional. She was high spirited, intelligent and didn't want to get married. Which was totally against the Georgian idea of women.

I liked both the hero and the heroine in the book, but Rand was more interesting. His background, and his connection to the 13th century knight of Bess's books kept me wondering throughout the novel, what was going on with him. It was a little bit confusing until the end of the book where everything is revealed. Overall the book was good, it had a lot of action, but I think I was trying to connect it back to the poem the whole time and it just didn't quite make it for me. It's a great book in it's own right and I wish I had not had a preconceived idea of how it would go.

I recommend it to all of my historical romance fans, but I caution you to take the idea that it is related to "The Highwayman" out of your thoughts when reading it. On it's own merit, it is a very well written historical romance, with lots of adventure and even a hint of the paranormal that will appeal to some fans. I liked the fact that the author tackled some of the social ideas of the time and the idea of reincarnation or past lives.

The Landlord's Black-Eyed Daughter is available NOW from your favorite bookseller.

I'm giving this one 4 out of 5 apples from my book bag! (Might have been more if I hadn't equated it to Noyes poem) 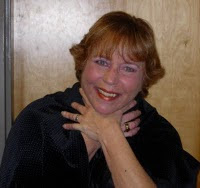 Former singer/actress and perennial rule-breaker Mary Ellen Dennis is the author of several award-winning historical romance novels and culinary mysteries and is growing her audience for both. She is married to a fellow author, whom she met online through a writers' loop; they live on Vancouver Island.
Posted by justpeachy36 at 8:00 AM