Review: The Book of Summers

The Book of Summers by Emylia Hall

(Received for an honest review from Mira Books)

For nine-year-old Beth Lowe, it should have been a magical summer—sun-kissed days lounging in rickety deck chairs, nights gathered around the fire. But what begins as an innocent vacation to Hungary ends with the devastating separation of her parents. Beth and her father return home alone, leaving her mother, Marika, behind.

Over the next seven summers, Beth walks a tightrope between worlds, fleeing her quiet home and distant father to bask in the intoxicating Hungarian countryside with Marika. It is during these enthralling summers that Beth comes to life and learns to love. But at sixteen, she uncovers a life-shattering secret, bringing her sacred summers with Marika abruptly to an end.

Now, years later, Beth receives a package containing a scrapbook, a haunting record of a time long forgotten. Suddenly, she is swept back to the world she left behind, forced to confront the betrayal that destroyed her—and to search her heart for forgiveness.

Emylia Hall's debut novel, The Book of Summers is a book that readers will not soon forget. It is a coming-of-age story about a young girl living in quietude in England with her father through the year and spending amazing summers with her wild Hungarian mother. Hall's debut is a poignant story about growing up and the secrets that sometimes destroy families. The characters are well drawn and Hall's descriptions of Hungry make it almost seem like a magical land. An extraordinary debut novel by a gifted writer!


This is probably not a book I would have picked up in my local book store or the library. I tend to stay away from contemporary fiction unless it has a paranormal bent and this one certainly did not. That's why I am particularly glad that I chose to accept the invitation to review it. Otherwise I would have missed out on a remarkable book.

Emlylia Hall's debut is a vibrant story that will stick with the reader even after the last page is turned. Hall's experiences summering in rural Hungry were obviously her inspiration of this novel and it shows just how much she must have loved her time there. Her descriptions of the scenery and the laid back atmosphere are so well written that readers will be longing to experience it for themselves. Hungry is a not a place that I would have considered for a vacation. I never thought of it as a beautiful place, but Hall certainly makes a strong case for this enchanting country. Her descriptions do get a bit long in places and drawn out, but that doesn't hinder the overall reading of the book. It was magical!


Beth is a young woman living in London who spent her childhood in a divided home. On a vacation to Hungry after the fall of the Iron Curtain, Marika, Beth's mother decides that she will not return with Beth and her father to England, thus abandoning them. Beth spends most of her year with her father who enjoys quiet and solitude. Nothing exciting ever happens and she longs for the summers she spends in Hungry with her mother. Every important moment in her life seems to happen during those magical summers including her first love with a Hungarian boy named Tomas. Unfortunately, when Beth decides she wants to remain in Hungry instead of returning to her father in England she learns that parents sometimes make decisions that change the course of their children's lives forever.


Fifteen years later Beth is a somewhat bitter young woman, estranged from her mother and rarely seeing her father. When her father brings her a scrapbook sent by her recently deceased mother, Beth is forced to face her past and find forgiveness somewhere in her heart. I loved the whole idea of the scrapbook and how it allowed the story to hop back and forth through time. Readers are seeing Beth today and they also get to see her as a young girl through her memories. This literary technique was used very well by Hall and gives the reader a chance to see how Beth became the way she is now.


Hall contrasts the life Beth lives with her father in England against the more relaxed and enchanting life she lives when she is with her mother in Hungry. When I first started reading I remember thinking that these two were so completely different people, it must have been the law of opposites that brought them together. I loved the way Hall shows how each part of Beth's life shapes her and makes her into the young woman she becomes. I was really interested in what her mother could have revealed to her that would have made her want nothing else to do with her and how that surrounded the fact that she wanted to stay with her mother. Hall keeps the reader guessing until late in the book and the conclusion of that mystery was extremely satisfying.


This is a really amazing book that many readers who enjoy books about women and families will love. The family dynamics in this one are very enjoyable to read about. I loved the look into a young girls adolescent dreams as well. Her first love and how her relationship with her parents evolved. I don't think I would necessarily consider this one a chick-lit novel, because it is more than that. It is very evocative and readers will quickly become emotionally invested in the story. This is one debut, you don't want to miss!

The Book of Summers is available NOW from your favorite bookseller. 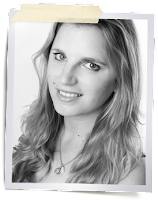 Emylia Hall was born in 1978 and grew up in the Devon countryside, the daughter of an English artist and a Hungarian quilt-maker. After studying at York University and in Lausanne, Switzerland, Emylia spent five years working in a London ad agency, before moving to the French Alps. It was there that she began to write. Emylia now lives in Bristol with her husband, also an author. Chosen by ELLE as one of the most anticipated debut novelists for 2012, Emylia was also one of three writers to appear in the Red Pages Hot 100. THE BOOK OF SUMMERS is her first novel, and is inspired by evocative memories of childhood holidays spent in rural Hungary.
Posted by justpeachy36 at 10:30 AM