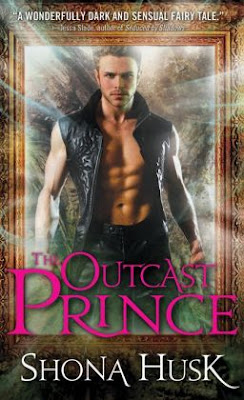 Excerpt from The Outcast Prince, courtesy of Amazon's Look Inside feature


Just One Taste Is All It Takes...
This is no ordinary mirror. Caspian caught a hint of color, a whirl of a waltz just past his reflection—a glimpse into the decadent Fairy Court of Annwyn. The home he could never have. It called to him, whispering temptation after temptation...if he could only reclaim his rightful heritage.
To Be Forever Lost...
Caspian has an even stronger reason to stay in the world of humans. He's just met a woman who captivates him like no other. But loving him has proven to be dangerous. And he will do whatever it takes to protect Lydia from the vicious, seductive world of Court—even if doing so requires the ultimate sacrifice: his soul.

After receiving high acclaim for her Shadowlands series, author Shona Husk takes on a new challenge. The first book in a series about the fairie world of Annwyn, The Outcast Prince, is a page turner from the first page to the last. Husk has created a world where the fairie court rules and where interactions between fairies and humans are not only possible but probable. This paranormal romance is sizzling with passion, full of suspense and action and has just right amount of paranormal activity to keep readers up all night!

I was really interested to see where Shona Husk would go after the Shadowlands series, which is one of my favorites. The Outcast Prince certainly held up the standards I have learned to expect from Husk. The world building was absolutely flawless. Her ideas on the fairie court were interesting and well researched. Having Scottish roots, I know a little bit about fairies at least in the form of the old stories and I felt that this book held true to what the old ones would say about this particular paranormal character.

I liked the idea that the hero had reasons not to want to return to Annwyn. Caspian doesn't exactly fit the profile of a tortured hero, but he certainly has some issues he needs to get a handle on. His psychometric abilities (knowing the history of an object by touch) are an asset to him in the human world and I found the fact that he was able to use it working with antiques was intriguing. This was an interesting twist.

I liked the premise of the book, which included the mirror that was essentially a portal to Annwyn, as well as the love story between Caspian and Lydia. I thought that both aspects of the book worked well together and played off of each other. The mirror being in the house that was Lydia's grandmothers and the fact that several different factions wanted the mirror did not overshadow the fact that Caspian was afraid to let Lydia into his heart.

Readers who enjoy a good love story that has quite a bit of action involved will love this one. Annwyn is an interesting place from the descriptions that Shona Husk gives. I can't wait to see where this series goes. Husk once again has given me a new series to look forward to. Don't miss this one! It appeals to the romance fan in all of us, as well as the paranormal lover.

The Outcast Prince is available now from your favorite bookseller.

Check out a guest post and giveaway from author Shona Husk later today for your chance to win! 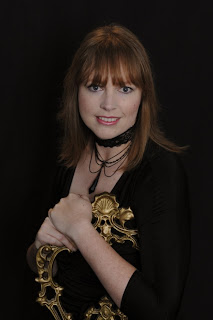 A civil designer by day and an author by night, Shona Husk lives in Western Australia at the edge of the Indian Ocean. Drawing on history, myth, and imagination, she writes about heroes who are armed and dangerous but have a heart of gold–sometimes literally.
Posted by justpeachy36 at 9:00 AM