Review: A Spy To Die For Excerpt from A Spy To Die For, courtesy of Amazon's Look Inside Feature

When Spy Meets Spy
Agent: Skylight
Profile: Seasoned Assassin Guild Super-Sleuth. Talented enough that she can write her own rules.
Budget: Unlimited.
Agent: Jack
Profile: Main investigator for the loosely federated Rover Assassins. Guided by a strict moral code, fierce loyalty, and a sense of duty.
More Than Sparks Will Fly
On opposite sides of a high-stakes game, lust lures two spies together in a passionate encounter. Little do they know that the heat of the moment would bind them, turning their worlds upside down. Hunted by deadly assassins, can the pair and their love withstand the onslaught?

Kris DeLake is one of the many pen names, author Kristine Kathryn Rusch uses. Her latest book in the Assassins Guild series, A Spy To Die For is a combination of science fiction and romance. But that's not all, it also has a touch of old fashioned espionage thrown into the mix, giving it appeal to a much broader audience. With excellent world building and expressive characters, DeLake has created a book that transcends genres and the stereotypical notions of what a romance novel should be like.

A Spy To Die For is a book where several different genres are meshed together. I grew up reading science fiction and it is still one of my favorite genres. Authors in this genre have such a wide range of potential because they are not limited to the confines of place and time. But that also provides a huge challenge. World building becomes essential and being able to engage the reader and describe for them every detail, because it is new and different and they have no form of reference to draw from.

The world Kris DeLake creates in the Assassins Guild series is fundamentally different from our own. It is set in the future that isn't exactly pleasant. DeLake provides plenty of back story to get the reader thinking and then adds characters that once again change the whole face of what the reader is expecting. A Spy To Die For continues to build DeLake's world. This novel centers around and unlikely romance that pits the hero and heroine against each other.

There is plenty of action in this book. The plot is fast and furious and the main characters race toward each other and their destiny at a break neck speed. This will appeal to the reader who likes a real page turner. There is action of some sort in just about every scene.  Science fiction is often very action packed, but in my experience has very little romance. That's why I liked the addition of a real love story in this series.

The romantic aspect of the book is well written and does not seem contrived to bring in the romance reading crowd. It flows naturally and opens up the genre to a whole new audience. It isn't just geeks who like sci-fi any more... LOL. I think this book and series blends both genres very well. One does not outshine the other. The sci-fi parts are exactly what one would expect and the romantic moments are exactly that, romantic. I think DeLake has managed to incorporate both genres excellently along with adding the whole espionage and spy aspect as well. This is a book a lot of different kinds of readers will enjoy.

A Spy To Die For is available NOW from your favorite bookseller.

Check out Kris DeLake's guest post later today for your chance to win a copy of A Spy To Die For! 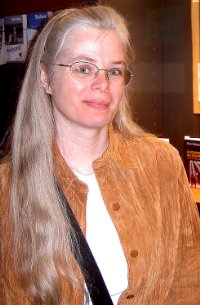 Kris DeLake is one of writer Kristine Kathryn Rusch's many pen names. In addition to writing as Kris DeLake in romance, Rusch also writes romance as Kristine Grayson (who specializes in paranormals) and Kristine Dexter (who prefers romantic suspense). In mystery, Rusch writes as Edgar- and Shamus-nominee Kris Nelscott. In science fiction and fantasy, Rusch goes by her real name. Under that name, she's a bestseller in many countries, and a double Hugo winner. To find out more about Rusch and her various names, go to her website,