Review: Love on a Midsummer Night 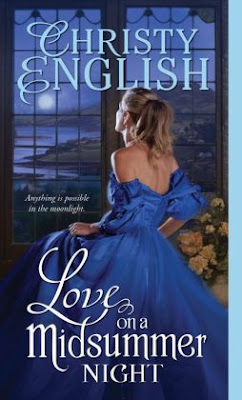 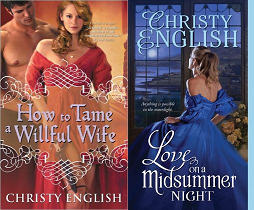 Excerpt from Love on a Midsummer Night, courtesy of Amazon's Look Inside feature.


How to Avoid an Unwanted Marriage:
1. Track down his first love
2. Slap his face when he propositions you to become his mistress
3. Flee the countryside with aforementioned scoundrel
4. Join a traveling troupe of Shakespearean actors
5. Don't fall under the enchantment of a magical midsummer moon...
To escape the scheming, pawing clutches of her late husband's nephew, Arabella Darlington turns to Raymond Olivier, the only man she ever loved, for help. But the sweet Raymond she knew as a girl is now the dissolute Earl of Pembroke—the most notorious rake in London.
When the situation turns deadly, Arabella and Raymond are forced to hide in the country. As she finds herself succumbing to Raymond's puckish charm, Arabella starts formulating a new plan: how to persuade a rake to propose.

It was only natural that author Christy English decided to take on Shakespeare when writing about the Regency period. Her former profession as a Shakespearean actress was no doubt the catalyst to this engaging and heartfelt series. Love on a Midsummer Night is the second book in the Shakespeare in Love series. Filled with witty banter, passionate characters and a heroine that values independence above all else, this book will have readers applauding!

What can I say... I'm always a sucker for a good love story, especially if it is a take off one of favorite playwrights. I found my love of Shakespeare when I was a sophomore in high school. We did a unit on plays and poetry and Shakespeare was of course the highlight. When I first found out that Christy English was writing a series based on the plays of Shakespeare, I was skeptical. Can anyone really do Shakespeare justice? I've seen it tried in books, movies and everything in between and rarely do any of them meet my expectations. But, I will have to concede, English not only met my expectations but she far exceeded them.

Love on a Midsummer Night is of course based on, "A Midsummer Night's Dream," one of Shakespeare's most popular comedy's. English, not unlike Shakespeare, is a master of character. The characters she has created for this book are multi-faceted and full of surprises. Even her supporting characters have a back story, a reason for being there. She imbues each character with a personality and merest appearance of each one is significant to the story. Though she is not writing about dreams, fairies, and the summer court, English uses a group of traveling actors, performing this play, in her story to not only tie in to the theme of the series, but to move the plot along in a convincing way.

Raymond Olivier, Earl of Pembroke was a character described as a rake. But when the reader looks more closely they will find a tortured hero. Raymond, feeling betrayed by the woman he loved has turned to drink, and gambling, mistresses and the other pursuits that men of the Ton took to when they wanted to be reckless and heedless of their position and rank. Raymond believed that Arabella married the Duke of Hawthorne because she wanted someone with a more influential title. Much of the book centers around this misunderstanding and how Raymond comes to deal with it's affect on his life. I liked Raymond a lot. He was a man's man. He was arrogant and full of himself and he just epitomized my idea of a rake. English did a wonderful job of showing his less reputable side as well as his sense of love and caring where Arabella was concerned.

But Arabella Darlington is the star of this book. English shows us a very determined woman. Arabella wants nothing more than to be independent. Forced to marry a man twice her age, Arabella now stands a precipice in her life. Will she be forced to marry her husbands dastardly nephew, now that he is dead or will she find the independence she longs for? She turns to her first love, now the Earl of Pembroke for help and what could he do, but agree. Arabella is a confident woman, who understands that the Ton has rules which she cannot get around. But with Raymond's help she finds that a man does not always limit a woman's independence, sometimes he enhances it. I loved her shy attitude in public, but her passion and feisty attitude in private. English has created a wonderful character here that readers will fall in love with.

The romance between these two characters is palpable. The reader will be able to literally feel Raymond's heartbreak, thinking the love of his life had betrayed him. They will sense Arabella's determination and need to be able to live her own life. English has a knack for making emotions leap of the page and fill the readers heart and mind as well as her characters. A well executed style that pervades the authors writing and something I will look forward to in reading all of her novels.

Christy English takes her experience and love of Shakespeare to new heights with this book. Love on a Midsummer Night is not only a nod to one of the greats, but it is a fantastic novel in it's own right. The characters are flawless. The emotion is real and heartfelt and the reader will find everything from family secrets, to betrayal and even a touch of mystery to keep them flipping those pages. In short... I loved it!

Love on a Midsummer Night is available NOW from your favorite bookseller. 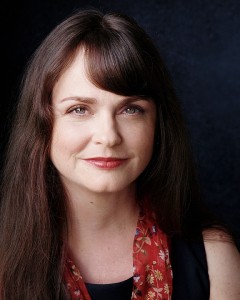 After years of acting in Shakespeare's plays, Christy English is excited to bring the Bard to Regency England. When she isn't acting, roller skating, or chasing the Muse, Christy writes historical novels from her home in North Carolina. Please visit her at www.ChristyEnglish.com
Posted by justpeachy36 at 12:49 PM

I was in the third grade and his name was Brian. He would ring my front doorbell every day after school and hide in the bushes when my Mom answered the door. At Christmas, he gave me a card that he had handdrawn with his colored pencils. He was a budding artist at 8 years old.