Review: Life as a Sandwich

My Synopsis:
Life as a Sandwich by Eric Peterson
(For review from Ollie Media)
A sandwich is made up of two slices of bread and the meat in between. In this book Wallace Noe and his wife Hannah are sandwiched in between raising their own children and caring for their elderly parents. This business novel will have readers thinking, "I've been there!", more than once as they read about the people and situations in Wallace's life. Wallace is at his wits end when a tragedy forces him to make some hard decisions.
Wallace puts all of his money into a start up business believing that this will make his future brighter and give him the life he has always wanted. Risking it all, Wallace sets out to life his dreams. Set in San Diego, this novel shows a picturesque view of this thriving California community but also explores it's dark side. Wallace has strong values and a great work ethic but is that enough to survive in the cut throat entrepreneurial world? Will Wallace's gamble pay off? Or will he be an accomplice in the demise of his dreams?
My Thoughts:
This was a very interesting novel based on the world of business. I wasn't really sure what a "business novel" was until I read this book by Eric Peterson. A business novel is set in the world of business but also has a basis in every day life.
There were a lot of things that I really liked including the in depth nature of the characters. Wallace was a man we could see everyday. He was trying to balance work, family and an obligation to his aging parents. Many of us face the same issues right now. He sinks everything he has into a start up company. With the economy being how it is today, that would be a huge risk, but sometimes they pay off and it was worth that all important risk. Wallace's character just wanted a better life, much like all of us. He was very easy to identify with.
My favorite part of this book had to be the humor. Eric Peterson took a subject like the "sandwich" generation and put his own humorous spin on it. Life sometimes can get the best of us but if you look at it through a different lens you can see the humor in it. It was very intelligent humor and made the book a joy to read.
Life as a Sandwich is available now from your favorite bookseller. 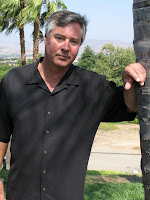 Here is some more information about the author, Eric Peterson.

A third-generation Californian, Eric Peterson grew up in Los Gatos, a town some 50 miles south of San Francisco. He began college at the University of California, San Diego and completed his degree at Stanford University, earning a BA in communication in 1979. He lives in Southern California with his wife and two daughters.

Check out the book trailer for Life is a Sandwich.

I give this one 4 out of 5 apples from my book bag!

When I heard of the word "business" that sort of turn me off. It indeed sounds different though, but I'm pretty sure it doesn't work for me..

I have never read a "business novel" before.definitely different from what I am used to.