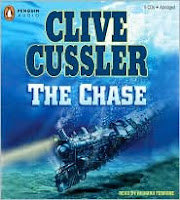 My Synopsis:
The Chase (Isaac Bell series - Book 1) by Clive Cussler
(Audio book from the Library)
In 1950 a rusty locomotive is raised from the depths of a Montana Lake. But how did it get there?
In 1906, Isaac Bell, a detective with the Van Dorn detective agency, was charged with finding the elusive, Butcher Bandit. The Bandit had been robbing banks and killing any witnesses to the crimes for over two years. Though, Bell is one of Van Dorn's best agents he is up against his worst foe. The Bandit is cunning and ruthless. He plans each robbery with precision and cold calculation. Blending in with the townspeople and then disappearing as if he was never there. Leaving no witnesses to identify himself, he feels invincible.
Bell and his cronies find clues that others have left behind. He soon finds out that the bandit is missing a finger and probably has red hair. He meets a mysterious woman, who appears to be a spy and is eventually led to San Francisco in search of the bandit. Meanwhile the bandit continues to rob and murder as if he is oblivious to the attention of the agents. How is the bandit escaping so easily? Who is the mysterious woman? Where will he strike next? Bell must figure out this and a lot more if he intends to catch the Butcher Bandit.
My Thoughts:
This was my first experience with Clive Cussler, though I had often heard of him. Being a history buff a book set around the great San Francisco earthquake and fire, was very interesting to me. This book was fast paced and really kept me on my toes trying to figure out what was going to happen next. It was definitely what I would call an historical thriller adventure with fast cars and fast trains, beautiful women, a little romance and whole lot of crime solving. I was enthralled from the first chapter.
Cussler's attention to detail was phenomenal. He was able to set the scene so perfectly you almost felt like you were there when the trains were racing across the country, or inside the ornate ballroom where Bell danced with Margret Cromwell. I found the main character, Isaac Bell a really interesting sort. He was a man of means, and did not need a job to support himself, but he loved to solve crimes and put criminals behind bars. A gentleman, with a touch of rogue in him. The villain was interesting as well. Even though he eventually got all the money he needed, he continued to rob and kill because of the thrill it gave him to outwit those trying to capture him.
The Chase is available now from your favorite bookseller!
I really enjoyed this audio book and I will give it 4 out of 5 apples from my book bag! 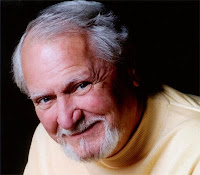 Clive Cussler, the Grand Master of the American action adventure novel, grew up in Alhambra, California. He later attended Pasadena City College for two years, but then enlisted in the Air Force during the Korean War where he served as an aircraft mechanic and flight engineer in the Military Air Transport Service. Upon his discharge, he became a copywriter and later creative director for two of the nation's leading ad agencies. At that time, he wrote and produced radio and television commercials that won numerous international awards one at the prestigious Cannes Film Festival.

Cussler began writing in 1965 and published his first novel featuring Dirk Pitt® in 1973. His first non-fiction work, THE SEA HUNTERS, was released in 1996. Because of this work the Board of Governors of the Maritime College, State University of New York considered THE SEA HUNTERS in lieu of a Ph.D. thesis and awarded Cussler a Doctor of Letters degree in May of 1997. It was the first time since the College was founded in 1874 that such a degree was bestowed.

As THE SEA HUNTERS and THE SEA HUNTERS II relate, Cussler is the founder the National Underwater & Marine Agency, (NUMA) a 501C3 non-profit organization that dedicates itself to American maritime and naval history. Cussler and his crew of marine experts and NUMA volunteers have discovered over 60 historically significant underwater wreck sites. After verifying their finds, NUMA turns the rights to the artifacts over to non-profits, universities, or government entities all over the world. Some of these finds include the C.S.S. Hunley, best known as the first submarine to sink a ship in battle; the Housatonic, the ship the Hunley sank; the U-20, the U-boat that sank the Lusitania; the Cumberland, sunk by the famous ironclad, Merrimack; the Confederate raider Florida; the Navy airship, Akron; the Republic of Texas Navy warship, Zavala, found under a parking lot in Galveston, Texas; and the remains of the Carpathia, the valiant ship that braved icebergs to rescue the survivor's of the Titanic. In addition to being Chairman of NUMA, Cussler is a fellow in both the Explorers Club of New York and the Royal Geographic Society in London. He has also been honored with the Lowell Thomas Award for outstanding underwater exploration.

A noted collector of classic automobiles, Cussler owns 85 of the finest examples of custom coachwork and 50's convertibles to be found anywhere. They are garaged near Golden, Colorado. Today, Cussler divides his time between the mountains of Colorado and the deserts of Arizona.

A friend of mine is SUPER crazy when it comes to Clive Cussler book and now I think I can understand why. Never read anything by him before so perhaps it is about time to give this one a shot. Stellar review!

Oh this sounds like a great book! Thanks for the review :)

I've seen Clive Cussler's books around before but I've never tried it. Maybe I will one of these days. I mean there's got to be a reason why he has over 125 million fans right?