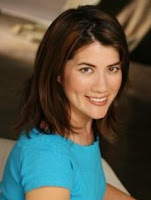 Please join me in welcoming author Margaret Dilloway to Debbie's Book Bag today. Margaret is the debut author of How to be an American Housewife, which is now being released in paperback. Margaret is going to share with us the inspiration behind her novel and the publisher has been kind in offering two copies of her book for giveaway. See details at the end of the post.
Many of the small scenes of HOW TO BE AN AMERICAN HOUSEWIFE are pulled straight out of my mother’s life. These are stories she used to tell me when I was a child, stories that I hated hearing, actually, because they referenced hardship and a mother who was not mine at all, but some other person from another time and place. That my mother grew up in a house with dirt floors, had no food, and had bombs dropped on her scared me.
Like Shoko, Mom was a “war bride,” those Japanese women that married servicemen from other countries in the occupation years after WWII, when their country was in shambles and they wanted to find a better life.
Mom finished high school (straight As, thank you very much) and left her hometown to go work for the Americans. Her own family was poor, and everyone wanted her brother, the only boy in the family in her family of five siblings, to succeed. She sent money home to put her brother through school.
Around age 26, Mom at last (because that’s pretty old for a Japanese woman, especially back then) it was time to get married. She and her father had already discussed the possibility of her marrying an American. Her father told her that Japan was going to become like America anyway, so she might as well do it.
She’d been dating some servicemen. I don’t know how many, or how serious she got with any of them; but her stories made it seem like she was fighting them off in droves! She photographed each one and took those photos home to her father, so he could see what her choices were.
Luckily for my existence, my grandfather chose my dad, citing his “honest eyes.” They married in 1958.
Mom also told me about what it was like to assimilate into American culture—because she did want to assimilate, badly. The strange food, the language, and the traditions were all foreign to her. She told me of how people treated her and my oldest sibling, born in 1960, back when being married to a person of “Mongoloid” descent was still illegal in many states.
With her stories surging up in my mind, I began writing the novel. I did choose to write it as fiction, so I could make up the plot, but I did include the incidents that she told me about.
A guide book Mom had, THE AMERICAN WAY OF HOUSEKEEPING, written in Japanese and English, served as the inspiration for the structure. I wrote fictional chapter headings, so each one matches the theme in the upcoming related chapter of the novel.
Thanks so much for joining us today Margaret!
Check out my review of How to be an American Housewife by Margaret Dilloway later today!
GIVEAWAY DETAILS:
The publisher has graciously offered two copies of How to be an American Housewife by Margaret Dilloway to two lucky winners from Debbie's Book Bag!
~ You must be a Google Friend Connect follower to participate.
~ US addresses only!
~ The deadline to enter this giveaway is Midnight EST, Aug. 18th.
1. Please leave a comment in appreciation to the author on THIS post.
2. Please fill out the FORM.
Posted by justpeachy36 at 11:20 AM

I enjoyed reading Margaret's comments and was interested to learn about her mother's experience aiding in the story.

I like the fact that the author based this book loosely on her Mother's life. That makes it very interesting to me.

Thanks for the great giveaway. I cna't wait to read your books. Tore923@aol.com

I enjoyed reading your review. thanks

Thanks for the great review! This sounds like a really good book and I can't wait to read it :)
jwitt33 at live dot com

This book sounds wonderful. I love relationship stories like this.

I've just learned of this book today, and I've looking forward to reading it even more now that I've read your review (and the author interview was great too!) Thank you for the giveaway, that's so sweet!

What a fabulous and touching story. It's often more meaningful to read a book that is based upon true events.

Best of luck with your book.

I have always been interested in stories about people moving to new places with different cultures. This sounds likes an interesting book to read. Thanks for the giveaway!

This is a very nice post, very interesting and I liked her story.