Review and Giveaway: A Killer Column

Casey Mayes on the WEB: www.caseymayes.com is supposed to be the website for this author, but the link was not working when I wrote this review. The site may just be down.

Casey Mayes is one of the many pseudonyms of author Tim Myers.

Savannah Stone has always known her numbers. So it's only natural that she makes a living creating puzzles for logic lovers. But when murder is factored into the equation, logic is what leads her to the killer...

Savannah has a conundrum. Derrick Duncan, her puzzle editor and syndicator, is terminating their working relationship. To finally be free of Derrick's abusive conduct and air-tight contract should be a cause for celebration, but he's sold Savannah's column to a syndicate. She greets this news with a very ugly - and very public - reaction.

Once her cooler head has prevailed, Savannah returns to Derrick to apologize - only to find he's been stabbed to death. The police are already looking at her as the prime suspect, but Savannah knows that Derrick's temperament was legendary and that she wasn't the only puzzle maker t cross words with him...

Casey Mayes aka. Tim Myers brings readers the second book in the Mystery by the Number series, A Killer Column. Tim Myers has written several cozy mystery series' and fans of his work will be very interested in his latest series featuring a logic puzzle creator and her former police chief husband. Savannah and Zach Stone are quite a couple when it comes to solving mysteries. They are characters that cozy fans are sure fall in love with. If math and logic puzzles get you going, this is the series for you!

Savannah Stone gave up teaching math to become a math and logic puzzle creator. She doesn't regret the decision but she does regret her air tight contract with her sydndicator, Derrick Duncan. Their relationship is nothing, if not stormy and when Derrick tells her, he has sold her column to another syndicate, Savannah nearly blows a gasket. When she ends up having a very public display of anger which results in her slapping Derrick in front of his assistant, she doesn't initially understand it's importance. But when she returns after cooling down to apologize, Derrick is dead! With a knife in his back and Savannah named the prime suspect, it's up to the help of her husband and friend Jenny to come to the rescue and help her solve the real puzzle of who killed Derrick.

Casey Mayes has created a series that will appeal to those readers who love math, reason, logic, and puzzles. But mostly to cozy fans who love a good mystery. A Killer Column pits puzzle creator, Savannah Stone against a killer who has a lot to gain from Derrick Duncan's death. I liked the fact that the author started building up Derrick's bad temperament in the first book in the series, and just evolved that into the plot of the second installment in the series. Readers who have read the first book, A Deadly Row, have already gotten a dose of Derrick's bad behavior and it's hard to see that he could push the right buttons to make someone want to kill him.

There are several things that I like about this series and this book in particular. First of all I always try to reason out in my head whether the overall premise of the book is something that could have happened in real life. I know that books are supposed to help readers escape reality but when it comes to mysteries, I think it is important to stick to situations that could happen in the real world because readers use their own deductive reasoning to try to figure out the crime right along with the writer. In A Killer Column, Mayes creates a situation that is very possible. Creative people tend to be a bit high strung sometimes and working with a hard nosed editor that just doesn't seem to get it, could really make someone snap.

I liked the fact that Mayes gives the reader several suspects right off the bat with this one. When Savannah goes to her meeting she meets one columnist stomping out and sees another anxiously awaiting a meeting after she gets hers over with and of course there are all of the writers and puzzlers he has made angry in the past as well as his trusty assistant who is poised to take over where Derrick left off. I like to know what I'm up against with the mystery right from the beginning and Mayes definitely puts it all out there. I always find myself trying to out guess the author and figure out who did before the end of the book. Sometimes I do and sometimes I don't. This one is full of twists, turns and total u-turns. It's hard to figure out, which is a good thing.

This book is fast paced and packs quite a punch. The mystery aspect of the book is well written and will keep in the most adept mystery reader on their toes. Mayes creates characters that the reader can identify with, and want to know more about. Savannah and Zach are engaging and their relationship is very receptive and accepting for each others strengths and weaknesses. It is not required that you read the first book in the series before you read A Killer Column, but I think readers will want to go back and pick it up, because it adds to the feel of the second book. It is however, a very good stand alone.

I recommend this one to all my cozy fans, if you have't picked up a Casey Mayes or Tim Myers book, you don't know what you're missing. This is an author who understands the cozy sub-genre and what it's all about. If you are a math and logic puzzler, this one is definitely up your alley and even has some puzzles included at the end. Math was always my worst subject, but I really liked this book!

A Killer Column is available NOW from your favorite bookseller. 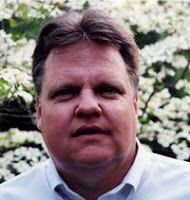 Tim Myers has been writing mysteries since 1993. He is the Agatha Award nominated author of 24 novels with Penguin/Berkley/Prime Crime, Penguin/NAL/Signet, St Martin's Press/Minotaur, and Kensington. Ten of his novels have been IMBA National Bestsellers, landing as high as #2. Tim has written under his own name, as well as Elizabeth Bright, Chris Cavender, Casey Mayes, and others.

His first story, My Late Aunt Hattie, was an 800 word short-short that combined elements of comedy, mystery, and the supernatural. It was published in Alfred Hitchcock's Mystery Magazine and went on to be included in The Haunted Hour anthology. The author has also had stories included in the Mystery Writers of America Anthology A Hot and Sultry Night for Crime, as well as the hardcover anthology Murder Most Crafty. He is also the author of over 80 short stories, and has been nominated three times for the Derringer Award for Excellence is short mystery fiction.

The publisher has graciously offered one copy of A Killer Column to one lucky winner from Debbie's Book Bag!

~ You must be a Google Friend Connect follower to participate.
~ US Addresses only (Publisher Request)
~ The deadline to enter this giveaway is Midnight EST September 4th.

1. Please leave a comment in appreciation of the author on THIS post.
2. Please fill out the FORM.
Posted by justpeachy36 at 6:10 PM

I do love math and logic puzzles and a good mystery. Count me in.

I love a good mystery too!

another cozy mystery series i have to read!!!
thank you for the giveaway!!!

Another new to me author, which I love finding. This sounds like a great series!!

Savavnnah sounds like a smart sleuth, with all her numbers.
Theresa N
weceno(at)yahoo(dot)com

I am a cozy fan who loves a good mystery.

I love murder mysteries. Thanks for the giveaway. Tore923@aol.com

I have almost all of Tim's books and love them. So I definitely should love this one as well. It is on my tbr list.

I love math and logic problems - I subscribe to 3 of their magazines - so this should be a perfect fit for me!
kpbarnett1941[at]aol.com

Reader Of The Pack said...

This sounds like a great series! I love logic problems.

I was always terrible at math except for geometry but I would love to read this book. Thank you for this book giveaway!

A Killer Column sounds so good, I must read it!
mom1248(at)att(dot)net

great giveaway another mystery- my kind of read.

Sounds like a good one! Thanks for the giveaway!

I'm not big on math but I do love mysteries. I'd love to read this! It sounds good!
mittens0831 at aol dot com

I'm sure I'd really enjoy this one~just LOVE a good cozy=)
Thanks so much,
Luvdaylilies
Luvdaylilies at bellsouth dot net

I'm a puzzle fan (I bet a lot of mystery fans have that in common)- I'd like to read this one!

Sounds like a really cool mystery. Cozy mysteries are great. I would love to read this one.