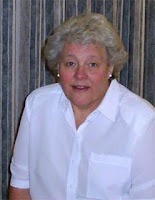 Hazel Statham lives in England and has been writing on and off ever since she was fifteen. Hazel lives with her husband, Terry, and a beautiful Labrador named Mollie. Apart from writing, her other ruling passion is animals, and until recently she had served as the treasurer for an organization that raised money for animal charities.

Consequence is Hazel's second novel for AVALON. The Portrait is also available.
Posted by justpeachy36 at 12:00 PM

Thank you so much for such a lovely review, Debbie. I'm so pleased you enjoyed CONSEQUENCE, the first book in the Dukes of Lear Trilogy. Although related, all three books are stand-alone stories and can be read in any order.

Again, thank you so very much,

I'm a big fan of Jane Austen and Georgette Heyer so I can't wait to read Consequence by Hazel Statham. I have a feeling I'm gonna become a big fan of hers too :) Thanks for sharing your review.