Please join me in welcoming Phillipa Ashley back to Debbie's Book Bag! Phillipa is here promoting her latest release, Just Say Yes. The publisher is sponsoring a giveaway for one copy of Phillipa's book, see details at the end of the post.

DEB: Phillipa, this is not the first time you've been with us here at Debbie's Book Bag. Tell us what you've been up to.PA: First let me say a huge thanks for inviting me back, Debbie! What have I been up to? Well, I’ve been busy launching the four romantic novels which have been published in the USA by Sourcebooks. I’ve also been writing and editing two longer romances which are being published in the UK and other parts of the world by Piatkus Entice (part of Hachette) from October 2012.
DEB: Tell us about your latest release, Just Say Yes. Is this a single title, a part of a series, etc.PA: It’s a single title. On the surface it’s a romantic romp, hopefully it will make you laugh and the ending is one of the most romantic I’ve ever written. It’s also something of a comment on reality TV culture and the pressure people are under to get together for the wrong reasons.
DEB: You've written some really wonderful female characters in your career. What makes Lucy Gibson special? How does she stand out from the others?PA: Thank you! One UK reviewer once commented that Lucy the kind of woman who doesn’t recognize her own inner beauty. I like that because she does grow from a caterpillar to butterfly by the end of the book, not physically but emotionally. She starts out in a job that doesn’t stretch her and not really knowing what she wants or needs from a relationship. She’s a little naïve but her eyes are opened as she learns to respect herself and take on new challenges – and that’s really when she starts to realize who her soul mate is.
DEB: What kind of research did you do for this novel? Were there specific aspects of the book that you needed more information for?PA: I watched some reality TV which I don’t like much as you’ll see from the book! The premise of the novel came from an Internet story about an American guy who had proposed to his girlfriend during the commercials in an episode of Veronica Mars. She was filmed live as she gave her reaction. Happily, their story had a good ending but I thought: that’s a lot of pressure to put on someone… what if she’d said no?
DEB: Do you have advice for new writers?PA: Be persistent and aim to be the person who never gave up. You may get lots of rejections but you’ll learn so much along the way and one day your book will strike the perfect note with an editor.
DEB: What are you working on right now? Or what are your plans for the future as far as writing goes?PA: My next book is called Miranda’s Mount and that’s out in October 2012 with Piatkus Entice in the UK and other countries. I am currently in the middle of writing a second book for Entice.
DEB: Do you have a favorite author or genre? What do you read when you have the opportunity?PA: I like sexy and sweet romance. Some of my fave US authors are Rachel Gibson, Jill Shalvis and Bella Andre and I love UK authors like Jill Mansell and Katie Fforde.
DEB: Tell us one thing about you that readers may not know?PA: I’ve got some stuff on my Kindle I don’t want anyone to know about…okay; it’s only 50 Shades but…. 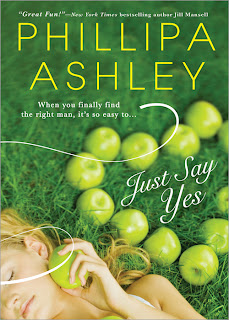 The publisher is sponsoring a giveaway of one copy of Just Say Yes by Phillipa Ashley.

~You must be a GFC follow or an E-mail subscriber to participate.
~U.S. addresses only.
~Deadline to enter this giveaway is Midnight EST June 18th .

1. Please leave a comment in appreciation to the author on this post, not the form.
2.Please fill out the FORM.
Posted by justpeachy36 at 9:30 AM

Congrats on the four romantic novels. This book sounds fantastic. Can't wait to read it.

Enjoyed the interview. Sounds like a great read for me. Thanks for this opportunity.GFC name is Lucky47 and email subscriber.
Carol L
Lucky4750 (at) aol (dot) com

I don't understand those public proposals and wonder how many end up in shambles. When Rory in Gilmore Girls said no, I cheered! Fun interview. I put your book on my wish list.
kpbarnett1941[at]aol.com

I would love to read this book. It sounds very interesting.

This looks like a fun summer read. I must admit I do watch several reality TV shows. They are kind of like car accidents - you just can't believe what happens - how can people say what they do knowing it will be televised!
sallans d at yahoo dot com

Thanks for the interview and for offering this great new book.

This sounds like a new author I'd like to try...can't go wrong with some romance with humor thrown in!

My husband and I watch Amazing Race and I watch Dancing with the Stars. Both are reality shows that we enjoy. I love learning about books by reading blogs. (rblerner@ptd.net is most used e=mail)

The book sounds really good. I'd love to be entered to win!

Great interview.email subscriber.
Just Say Yes sounds like a great book. Please enter me in this contest. Thank you for the opportunity to win.

Great interview. The cover really catches the eye, I love it!

Congratulations on the book! It sounds like a good book.

Interesting article and I Banget Fill It Love
Fraternal greetings from our.