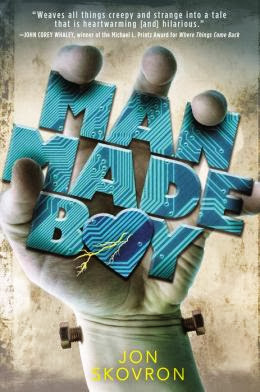 Man Made Boy by Jon Skovron

Excerpt from Man Made Boy, courtesy of Amazon's Look Inside feature.


Sixteen-year-old Boy’s never left home.  When you’re the son of Frankenstein’s monster and the Bride, it’s tough to go out in public, unless you want to draw the attention of a torch-wielding mob.  And since Boy and his family live in a secret enclave of monsters hidden under Times Square, it’s important they maintain a low profile.
Boy’s only interactions with the world are through the Internet, where he’s a hacker extraordinaire who can hide his hulking body and stitched-together face behind a layer of code.  When conflict erupts at home, Boy runs away and embarks on a cross-country road trip with the granddaughters of Jekyll and Hyde, who introduce him to malls and diners, love and heartbreak. But no matter how far Boy runs, he can’t escape his demons—both literal and figurative—until he faces his family once more.
This hilarious, romantic, and wildly imaginative tale redefines what it means to be a monster—and a man.

Jon Skovron's re-imagining of the Frankenstein story is a coming of age tale that adults and teens alike will love. Man Made Boy features other paranormal characters, as well as, seventeen year old Boy. The granddaughters of Jekyll and Hyde and a few other monsters of note appear in this well crafted novel about one monster who is trying find his place in the world. Skovron's voice is poignant and full of teenage angst in this book and his ability to bring a new face to old story is amazing. Readers who like a good monster tale should not miss this one!

I have always been a fan of classic literature and Mary Shelley's Frankenstein is one of my favorites. I loved the fact that Jon Skovron decided to put a modern spin on Shelley's masterpiece. Skovron is obviously very clever. I enjoyed his depiction of the underground monster community and the son and the monster and the bride. This book gives a nod to so many different genres, it is somewhat hard to classify. But in the end it is a young adult novel about a Boy's struggle to fit in, and similarities between monsters and men.

Boy was such an amazing character. Skovron has a real knack for getting into the head of a teenager. Boy is just like every other teen out there. He is clumsy and certainly doesn't look like everybody else with his stitches and large body. He doesn't have any interaction with the real world except behind the computer screen, where he can be anyone he wants to be. He has a crush on a girl who may or may not like him back. He wants to go into the world and see what's out there. Skovron does a masterful job of describing Boy's emotions and feelings and how he manages to make a place for himself. I loved the growth and character development that went into this one.

Half way through the book we meet the grand-daughters of the infamous Jekyll and Hyde. Claire and Sophie were my favorite supporting characters and I would have loved to learn more about them. The fact that both girls inhabit one body was interesting enough to be a novel all on it's own. I loved the fact that Boy develops feelings for both girls. A match made in heaven! His interactions with them and the Trowe girl were typical teenage romance and that was nice to see. The author didn't make his characters too mature or too focused on things that teens wouldn't care about. He stayed true to the teenage temperament and ideas and really made it work in this one.

There were a lot of different characters mentioned throughout the book, that I found myself wanting to know more about. I felt like Skovron had so much to work with here, that it would have been nice to slow the pace down a little bit and give readers more insight into some of the other monsters. It seemed a little rushed in places and I just wanted to know more. I will be interested to see what happens to Boy as he goes to college and hope that Skovron re-introduces some of the other interesting creatures who were mentioned in this one.

This is a very good YA novel that will appeal to adults as well. Readers of the classics will find it interesting and definitely worth their time. Paranormal fans will love it. It's not a fairy tale re-imaging like those that have become so popular of late, but a monster mash. I enjoyed it a lot and am looking forward to a sequel.

Man Made Boy is available NOW from your favorite bookseller.

Jon Skovron has been an actor, musician, lifeguard, Broadway theater ticket seller, warehouse grunt, technical writer, and web developer. Now he is a father and the author of Young Adult novels Struts & Frets, Misfit and the forthcoming Man Made Boy, as well as many short stories and essays. He generally likes stories that are dark, strange, and occasionally funny.Jon was born in Columbus, Ohio. After traveling around a bit, from Pittsburgh to London to New York to Seattle, he has settled, somewhat haphazardly, in the Washington, DC area, where he and his two sons can regularly be seen not fitting into the general Government scene.

Speculating on SpecFic will be having a review and giveaway for Man Made Boy, but it does not start until November 4th. So, if you'd like a chance to win, put that date on your calendar. Also there is a great interview with the author over at Behind a Million and One Pages.
Posted by justpeachy36 at 10:00 AM