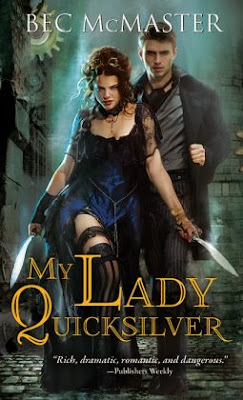 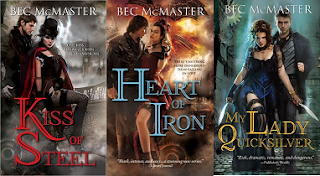 Excerpt from My Lady Quicksilver, courtesy of the author's website.


"Deftly blends elements of Steampunk and vampire romance with brilliantly successful results...darkly atmospheric and delectably sexy."—Booklist Starred Review for Kiss of Steel
In the mist-shrouded streets of a steam-fueled London, a clockwork army is on the rise, vampire blue bloods rule the streets, and war is brewing...
I Will Come For You...
He will find her no matter what. As a blue-blooded captain of the Nighthawk Guard, his senses are keener than most. Some think he's indestructible. But once he finds the elusive Mercury, what will he do with her?
It's his duty to turn her in—she's a notorious spy and traitor. But after one stolen moment, he can't forget the feel of her in his arms, the taste of her, or the sharp sting of betrayal as she slipped off into the night. Little does Mercury know, no one hunts better than the Nighthawk. And his greatest revenge will be to leave her begging for his touch...

Bec McMaster's thrilling London Steampunk series continues with her latest book, My Lady Quicksilver. This book is somewhat of a departure from the first two books in the series, in that is focuses on a different aspect of the coming battle between the blueblood vampires and the human resistance movement. McMaster has knack for blending genres. She gives readers a little bit of historical romance, some paranormal characters, definitely a lot of suspense and the steampunk elements that make this series so remarkable. My Lady Quicksilver takes the series in a slightly different direction all within the amazing world that McMaster has crafted for her readers. A wonderful addition to the series!

What can I say about the London Steampunk series. If you are a paranormal romance lover, this book is for you. If you love a good historical romance, this is the one. If you find the new and surprising world of steampunk interesting, try this one. Bec McMaster is a wonderful author, whose world building in this series is phenomenal. She takes what readers have always considered about the vampire mythos and turns it on it's ear. I like the fact that she gives readers strong characters who are fighting for something. And that love doesn't wait for a good time to happen in her books, it takes her characters by surprise and grips them to their core.

My Lady Quicksilver isn't like the first two books in the series and I think McMaster does that for a reason. In the first two books we learn a lot about the blueblood vampires who rule London in McMaster alternative world. We learn about the Blades crew and those living in the rookeries of London's dark side. The find out a bit about the Echelon and how it works. But in this book, we see a totally different side to the conflict.

Jasper Lynch is a rogue blueblood, cast out and left on his own. He could have sat down and took it or he could make something of it. He is the Nighthawk, the blueblood who takes in those who are misfits and discarded and makes something of them. He has tracked down and captured many of the Echelon's enemies. He is strong and loyal and a warrior in every sense of the word. McMaster certainly knows how to write an alpha male, a brooding hero and a character that readers will fall in love with. He may not be Will from Heart of Iron, but he has his own brand of charm that will warm the hearts of readers and make the hair on the back of their neck stand up.

Rosalind is the undercover leader of the human resistance. She is working as Jasper's secretary while she attempts to find the whereabouts of her brother. Her fierce alter ego, Mercury is at the top of Nighthawk wanted list. She's a strong woman with deep convictions and underlying sense of guilt that drives her. McMaster gives readers a woman who may be part machine, but she's all heart. As she begins to see that her hatred of the bluebloods may have been blinding her to the fact that they are not all the same. Jasper is different. I loved the fact that she realizes that she may have been wrong and shes strong enough to admit it. A fantastic heroine in my opinion.

The romance between Jasper and Rosalind is hot from the get go, whether she is herself or Mercury, Lynch is attracted. It makes for a weird little love triangle. He knows he has feelings for the enemy. Mercury makes his blood boil in more ways than one, but the sassy secretary is heating him up as well for different reasons. I loved the fact that Rosa just keeps taking it further and further with him until there is no turning back. Once she realizes that her dishonesty may ruin her chance at love, she must face the fact that telling the truth is the biggest sacrifice she may ever make. McMaster is definitely the master at the romantic elements of this book. It's sexy, it's sensual and it's romantic.

The world building in this book is essential. Readers are seeing a different side to the conflict and learning more about the players. It certainly changes the dynamic from the previous books, but I don't think that's a bad thing. It opens up a lot of possibilities as to where McMaster will take readers next. There is definitely an impending sense of doom. A battle is coming and now we are learning about another set of the players. I thought it was fantastic and can't wait to see where it goes next.

My Lady Quicksilver is available NOW from your favorite bookseller. 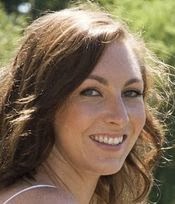 Bec lives in a small town in country Victoria and grew up with her nose in a book. A member of RWA, RWA (Australia) and RWNZ, she writes sexy, dark paranormals and steampunk romance. When not writing, reading, or poring over travel brochures, she loves spending time with her very own hero or daydreaming about new worlds.

Check out She-Wolf Reads for chance to win a copy of Bec McMaster's book, My Lady Quicksilver. You have about six days to sign up left. Ends on 10/17.
Posted by justpeachy36 at 10:00 AM