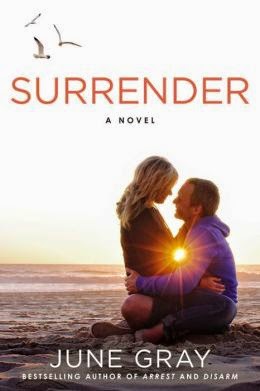 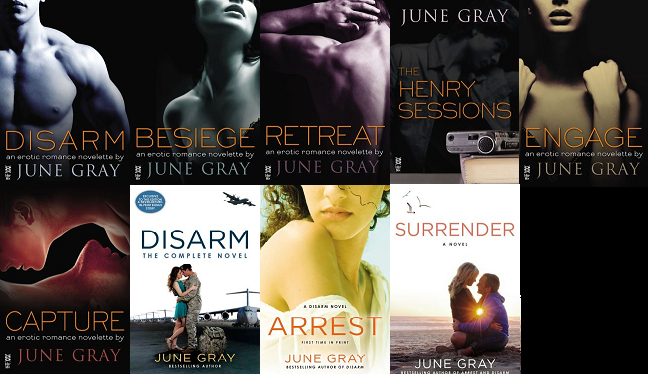 Excerpt from, Surrender, courtesy of Amazon's Look Inside feature.

WARNING: This novel may inappropriate for readers under the age of 18.

Bestselling author June Gray’s romances have been praised as “scorching hot”(MsRomantic Reads). Now, in her latest scintillating read, one woman is torn between remembering her past and committing to an unpredictable future...Julie Keaton had everything—she had a new career in a new city and, more importantly, a bright future with fiance, Jason Sherman. That is, until the day she discovered that he had been killed in Afghanistan. In one moment, her life changed, as everything she’d hoped for died along with him.Years later and Julie still feels the aftershocks of Jason’s death. She is no longer the same adventurous, open girl; now she wears armor around her heart in order to protect the most important thing in her life—her son.But when Julie meets the mysterious Neal, she starts to feel the smallest flicker of hope, as what began as a fling quickly becomes something more. Neal is the first man since Jason’s death to break down her armor and make her believe again. But when she discovers the secret he’s been keeping, she has to ask herself: can she surrender to a future with Neal or will Jason’s death forever tie her to the past?

Though not exactly a part of the Disarm series, June Gray's new book, Surrender uses secondary characters from that series as the main characters for this book. Making the characters familiar but not overly explored. Gray has a way with military romance due to her own experience that gives this book an authentic feel, while also putting the author's own spin on it. Readers looking for a hot read, that has some substance behind it will find this one a good next read.

Having read June Gray's Disarm series and falling in love with Elsie and Henry, I was excited about this book coming out. Julie would have been Elsie's sister-in-law, had Jason, Elsie's brother not been killed in Afghanistan. I liked the fact that Julie was someone I felt like I already knew, but didn't know very well. It made her story resonate all the more. A chance meeting on the beach with Neal turns into something more when Julie realizes that Neal is also a guest at Elsie and Henry's wedding. I liked the feel of destiny about their meeting. Like they were meant to meet each other day, fate if you will.

Julie was a single mom who was really only interested in hooking up with Neal for the short term. Given the fact that her parents had a very rocky relationship and that she had lost someone she loved very much, I could sympathize with Julie's issues regarding commitment. To me it was really all a matter of not letting herself be hurt again. If you don't let it to that far it can't come back to bite you. But with Neal it was different. Julie did continue to struggle though, long after I thought she should have been willing to give Neal a chance. She didn't tell him about her son for the longest time and he didn't tell her about the fact that he was in the reserves. It just felt like their relationship was not built on honesty. Eventually they get around to it, but it felt like an afterthought and not what a good romance should be based on.

There was a lot of hot and steamy parts to the book that were realistic if you look at it from the stand point of a one night stand or a quick fling, but a little disconcerting when you think about building a lasting relationship on that kind of foundation. I liked the chemistry between Neal and Julie and they were honest about what they wanted in bed, if they were not honest about anything else.

This one wasn't really my cup of tea. The writing was just as good as any of Gray's previous books, but the connection between the lead characters was just not of the caliber I had come to expect from the author. It was a bit too superficial for me and the heroine had so many issues it was hard to see how a relationship would work with her and anyone.

Surrender is available NOW from your favorite bookseller.

June Gray is a daydreamer who, at the age of ten, penned a short story inspired by a Judy Blume novel and has been unable to stop writing since. She loves to tell stories that titillate and enrage, that break the reader’s heart and put it back together again.

Her fairy-tale life has been lived on four different continents—most recently, in a two-hundred-forty-year-old castle in rural Germany owned by a Graf. She was born in the Philippines, raised in Australia, and now calls the United States home, and she can currently be found enjoying the shores of Miami with her husband, two daughters, and a miniature schnauzer.

The publisher is sponsoring a giveaway for one copy of Surrender by June Gray.

~ You must be an email subscriber to participate.
~ US addresses only.
~ The deadline to enter this giveaway is Midnight EST, December 9th.

1. Please leave a comment. What you think it takes to move on from either a bad break up or losing someone?
2. Please fill out the FORM.
Posted by justpeachy36 at 10:00 AM

I think it just takes time... Then getting back on the horse, so to speak... But you have to be willing to open yourself up, not just looking for a one night stand or a string or hook-ups.

It takes time and a good support system. Oh and chocolate!

It does take time, and meeting someone else who is really great. Thanks for having the giveaway.