Review and Giveaway: Assault and Pepper 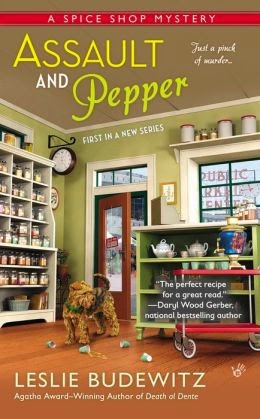 Excerpt from Assault and Pepper, courtesy of the author's website

The Agatha Award-winning author of Crime Rib is proud to introduce Pepper Reece, the owner of the Seattle Spice Shop who thinks she can handle any kind of salty customer—until a murderer ends up in the mix…

After leaving a dicey marriage and losing a beloved job in a corporate crash, Pepper Reece has found a new zest for life running a busy spice and tea shop in Seattle’s Pike Place Market. Her aromatic creations are the talk of the town, and everyone stops by for a cup of her refreshing spice tea, even other shopkeepers and Market regulars. But when a panhandler named Doc shows up dead on the store’s doorstep, a Seattle Spice Shop cup in his hand, the local gossip gets too hot for Pepper to handle—especially after the police arrest one of Pepper’s staffers, Tory Finch, for murder.
Tory seems to know why she’s a suspect, but she refuses to do anything to curry favor with the cops. Convinced her reticent employee is innocent, Pepper takes it on herself to sniff out some clues. Only, if she’s not careful, Pepper’s nosy ways might make her next on the killer’s list…

Leslie Budewitz brings reads the first in a new cozy mystery series, Assault and Pepper. This is the first book in the Spice Shop Mystery series and may prove to be quite a favorite for cozy readers. Everything for the trendy Seattle setting to the robust and soothing spiced tea from the Seattle Spice Shop was enjoyable in this book. Budewitz introduces readers to a wonderful new heroine in Pepper Reece and gives them a intriguing and eclectic range of secondary characters. A great first effort in a new series!

I really loved Leslie Budewitz' Food Lovers series and was excited to see what she had to offer in this new series. I don't know about you, but one of the favorite things in my kitchen is my spice rack. I love to use it and I loved seeing how Budewitz decided to use spice in this series. A very interesting idea for a cozy series. Not only do we have regular spices that everyone might know but Budewitz also gives readers spiced tea and different kinds of recipes that are sure to have readers heading for the kitchen, book in hand.

One of the things that made this book so good was the setting. Seattle is one of those iconic cities that readers and foodies alike know for it's rainy days and wonderful markets and sights. Budewitz does Seattle justice in this book, making the reader smell the aromas and taste the wonderful offerings from the shops in Pike Place Market. I think Budewitz did her homework her and it played to her advantage. A fantastic setting for a new series.

Pepper Reece is the new heroine for this series. She was once a corporate HR manager in a stifled marriage with a cheating husband. Now she has her own business and a new life. But the past doesn't seem to be too far away since Tag, her ex-husband is cop whose beat happens to be around Pepper's Spice Shop. I thought Pepper was amazing as a new heroine, though I wanted to shake her a time to two to point out a possible clue, but eventually she got it and it all same to a satisfying end. I liked her attitude and her resourcefulness. A great new heroine.

The mystery aspect of the story centered around a dead homeless man who ended up on the doorstep of Pepper's shop and one of her employee's is nabbed for the murder. I thought Budewitz did a good job of giving Pepper reason and opportunity to investigate. I wasn't too keen on the fact that her ex-husband becomes an important character due to being a cop in the area. I thought that just didn't work, because of trust issues. The homeless denizens of the Pike Place Market were a bit too stereo-typical for me as well. Having lived in a city where there was a high population of homeless people, I have learned that there is far more to the story than most people ever know about them.

I did have a couple of moments of pause, in Budewitz' descriptions of the homeless population around the Pike Place Market and in her references to Pepper's relationship with her ex-husband, but all in all I really liked this book and I think that Budewitz will continue to give readers a lot to look forward to with this series. I think it was a great first effort in a series and I'm looking forward to what comes next for Pepper.

Assault and Pepper is available NOW from your favorite bookseller. 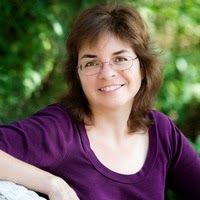 National bestselling author Leslie Budewitz writes the Spice Shop Mysteries (Assault and Pepper) and the Food Lovers’ Village Mysteries (Crime Rib; Death Al Dente). She fell in love with Seattle’s Pike Place Market as a college student, and still misses prowling its streets and alleys, sniffing out tasty treats and sensory delights. Leslie won the 2013 Agatha Award for Best First Novel for Death al Dente, first in the Food Lovers’ Village Mysteries, and won the 2011 Agatha Award for Best Nonfiction for Books, Crooks & Counselors: How to Write Accurately About Criminal Law and Courtroom Procedure. She loves to cook, eat, hike, travel, garden, and paint—not necessarily in that order. She lives in northwest Montana with her husband, Don Beans, a doctor of natural medicine, and their Burmese cat, Ruff, an avid bird-watcher.

The publisher is sponsoring a giveaway for one copy of Assault and Pepper by Leslie Budewitz.

~ You must be an email subscriber to participate.
~ US addresses only.
~ The deadline to enter this giveaway is Midnight EST, April 2nd.

1. Please leave a comment. What's your favorite spice and how do you use it?

My favorite spice is cinnamon. I use it to make Finnish cinnamon rolls.

I put pepper on everything. There can never be enough pepper.

What a great book. I enjoy using basil with fish and salads. thanks. saubleb(at)gmail(dot)com

Thanks for the kind words about ASSAULT AND PEPPER, Debbie. Favorite spice? Hmm. Probably the last one I used!

Everything that Leslie has written has been wonderful and I am really looking forward to reading Assault and Pepper very soon.

My favorite savory spice is granulated garlic and my favorite sweet spice is really good quality cinnamon. I love to grate my own nutmeg too and even have a little grater with a section to hold the nutmegs (or are they called nutmeg nuts or pods?)

Wishing you much success Leslie.
Sincerely,
Cynthia B

Lateley my favorite spice is rosemary---maybe because it'e the only plant I've been able to keep alive this winter.
suefarrell.farrell@gmail.com

Thank you, Debbie, and Penguin Books for the giveaway of Leslie's book, Assault and

My favorite spice is garlic salt and other than that due to my medical condition we can;t add very much else. I do like to read about other spices and when a book is called that I love it. As far as when my husband and i cook it's garlic salt and we use it in alot of meals we prepare!

I use the poultry seasoning on both roasted chicken and in chicken or turkey pot pie. It is the best! Thanks!

Always use garlic powder for most of my cooking.

I use pepper on nearly everything, but I like freshly ground.

My favorite spice is nutmeg. I love to put freshly grated nutmeg in my pumpkin smoothies.

Right now I find myself using a lot of fennel and basil.....

cinnamon i use it on toast , farina, oatmeal and apple sauce.

This recipe doesn't call for black pepper, but using both spices together has a better health benefit.

I love cardamom. I have a favorite recipe for an apple cake that I use it in.

I use a variety of spices based on what type of food I am cooking, but I recently found a spicy pepper blend that works with everything. Even just a light sprinkle adds flavor.

My favorite is garlic powder—I put it on everything, including popcorn!

cinnamon also. We don't measure, just add it to things.

My favorite spice is oregano.

Favorite spice...I have many I probably use garlic powder, dry mustard and paprika the most, for baking cinnamon although I also use it on french toast and in my coffee.

I love the smell of the spice aisle. :) Cinnamon is one of my favorites. Love it on peanut butter toast.

Lawry's Seasoning. My wife uses it on all our meats and chicken as well as Pierogies.

We use a lot of garlic when cooking.

I use onion and garlic powder/salt on my tossed salads. I often don't use salad dressing because the seasonings give the salad a delicious flavor.

My favorite spice is pepper. I put way too much on all things savory.

My favorite spice has to be nutmeg. I love pumpkin pie and this just reminds me so much of fall.

My favorite spice is cinnamon because I love baking cinnamon and sugar cookies. My second favorite has to be garlic because I just love garlic. LOL! Thanks for the giveaway!

I'm not much for spices but my son uses spices a lot and he does the cooking so I tend to do a lot of choking as I eat. My favorite spice is cinnamon and love to eat cinnamon toast and French toast.

My favorite spice is oregano in spaghetti sauce.

Garlic.. wait, is garlic a spice? hmm.. Not sure but I use it in every dish. Kids would love to hide the garlic once in a while.. lol

Cinnamon. Cinnamon on everything haha.

Cayenne. Everything comes alive with a pinch of red pepper! Even hot chocolate or oven-baked squash!

My favorite spice is cinnamon. I like to put it on fruit, or buttered toast. Thanks for having the giveaway.

I love Rosemary. I put it on veggies and meat.