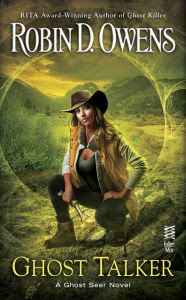 Excerpt from Ghost Talker, courtesy of Amazon's Look Inside feature.

In the latest from the author of Ghost Killer, Clare Cermak and Zach Slade adjust to living as psychics—and a couple—as they encounter vengeful souls... An angry poltergeist is stirring up trouble at Buffalo Bill’s grave, and Clare and Zach have been hired to investigate. Assisting them on the case as usual is their ghost dog Enzo, but they’re also aided by the restless ghost of Bill’s friend, Texas Jack. Meanwhile, the most well-known psychic in Denver is angered by Clare’s involvement in the case and will do whatever it takes to stop her. Of course, facing threats both living and undead are nothing new for Clare and Zach. Their relationship has weathered many storms. But there is a growing danger inside of Clare that could tear them both apart...

Robin D. Owens returns to the Ghost Seer series with the fourth book, Ghost Talker. Readers who have followed the series, will love that Clare and Zach are settling into their relationship and into life as psychics. This is a series that takes the original paranormal character, the ghost, and uses it as the focal point for a couple of psychics who solve crimes and lay ghosts for a living. Intrigued yet? You should be... this is a great new addition to the series!

I have read this entire series and loved every book. Robin D. Owens is a celebrated author, but this series is a bit of a change for her. The other books she has written were more of a cross between science fiction and paranormal romance. This series is something different. It leans more to the paranormal romance side but also has some very good mystery aspects. Zach is a former cop who has some psychic abilities that he has refused to explore until he meets Clare who has only recently learned to use her gift for laying ghosts or helping them reach the other side.

In Owens' latest installment to the series, the couple is finally getting used to the idea that they can see more than the average person, including a ghost dog named Enzo. What I liked so much about this one was the way Zach and Clare worked together. Clare's gift is generally confined to a certain time period. Ghosts of the old west, which is explored in every book in the series. In this one Buffalo Bill's grave is stirring up some trouble and his friend Texas Jack is haunting Clare. He won't rest until it's sorted out. Zach is ever by Clare's side and helping her to solve her cases. I loved the way they worked together and how Owen's incorporates Zach's abilities as well.

I have wanted Zach to embrace his psychic abilities from the beginning and seeing him so relaxed and comfortable in his own skin was great in this one. Clare brings out that part of him, just like she brings out his psychic gift. The chemistry between these two has always been great but in this one it seems more real and lasting than before. Zach needs her and she needs him. A great couple and very fun to read about. I like their passion and their romantic sides as well.

I love this series. Nothing to dislike here. If you like the paranormal, this one has everything you need in a good series. If you like romance it has that too. And there is mystery. How many books have all three? Not too many.

Buffalo Bill has always been one of those old west characters that I have loved. He was such a big personality and I liked that the mystery involved Bill and his friend Texas Jack. I always wondered how things might have been between these two in real life. Owens does a fantastic job of incorporating historical elements into her stories. I love Zach and Clare and the fact that both of them are becoming comfortable with each other and their abilities. A great addition to this wonderful series!

Ghost Talker is available NOW from your favorite bookseller.

RITA® Award Winning novelist Robin D. Owens credits the telepathic cat with attitude in selling her first futuristic/fantasy romance, HeartMate, published in December 2001. Since then she has written fourteen books in the series, Heart Fire the latest in November, 2014.
Her five book Luna series included average American women Summoned into another dimension to save a world. Her Mystic Circle series was a mixture of contemporary urban and romantic fantasy set in Denver.
And her newest stories, about an uptight accountant who sees Old West ghosts and helps them move on, will start with Ghost Seer in April of 2014. She is profoundly thankful to be recipient of the 2004 Rocky Mountain Fiction Writers’ Writer of the Year award as well as the 2011 Writer of the Year Award, the Colorado Romance Writers Lifetime Achievement Award and the 2010 Best Paranormal and Best of the Best Daphne Du Maurier Award…actually, after winning an award she tends to dance around bored cats.
Posted by justpeachy36 at 10:00 AM