Review: SEAL Wolf in Too Deep 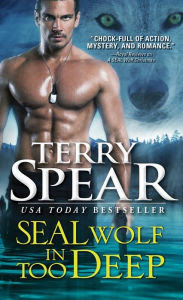 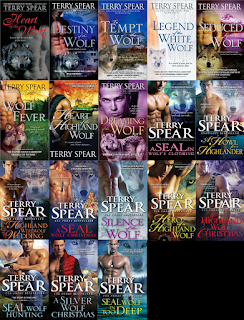 Excerpt from SEAL Wolf in Too Deep, courtesy of Amazon's Look Inside feature

Love spells danger for an alpha SEAL wolf and the woman who steals his heart in this steamy shifter romance from USA Today bestselling author Terry Spear
His love is dangerous
As a Navy SEAL and police diver, alpha wolf shifter Allan Rappaport knows how to handle tough situations, but the arrival of a human diving partner-especially one as attractive as Debbie Renaud-is a whole new challenge. Getting involved is dangerous, but Debbie's offers are hard to resist. As the heat between them rises and a murder plot thickens, Allan is on the brink of exposing his biggest secret.
But she's diving in headfirst
For Debbie, working with another top-notch diver like Allan is too good to be true, and their mutual attraction is hotter than she could have dreamed. Debbie suspects he's hiding something, though, and she's set on figuring it out-one off-duty rendezvous at a time. But when Debbie gets between a werewolf hunter and his intended victim, suddenly she is plunged straight into the heart of Allan's world-a world she never knew existed.

Terry Spear continues her highly successful Heart of the Wolf series with the eighteenth book, SEAL Wolf in too deep. Readers who have followed this ever-evolving series will find this book refreshing. It is a new beginning for a pack that has been practically decimated in the past. Family and pack mean everything and finding an outsider and human for a mate isn't in the plans. Spear brings readers a tale about love and duty and following your heart even when everyone else thinks you are not doing the right thing. A great new book from a trusted author!

Terry Spear is an author that I connected with early on my adventure with this blog. Some of her books were among the very first books I reviewed and also some of the first paranormal romance books I had ever read. To say I fell in love with this series and Terry's writing is probably an understatement. Not to sound too trite, but reading the Heart of the Wolf series changed my perspective on what I enjoyed reading in a profound way. I love romance and I love mysteries and Spear's books always have that in spades. Her attention to detail in both human and wolf behavior sets her writing apart from the 'pack'. I cannot recommend this author and series enough.

SEAL Wolf in Too Deep was a book I was really looking forward to for a lot of reasons. I wanted to see Paul and Lori's pack start to grow again and build on the relationships that Spear started out with all the way back in book 9. The interesting part about this particular pack is that their population is made up of a whole lot of females, which is rare, and that essentially sets up the book. Allan is a single male wolf shifter and the pack needs him. It is expected that he will mate with one of the females and continue the line of the pack. But as they say, the heart wants what the heart wants. When he falls for his human partner, the sparks fly in more ways than one.

Spear is so great at describing pack dynamics and making her wolf shifters adhere to how a real wolf pack might structure themselves and how they might deal with adversity. Allan wants to do the right thing by the pack but he also can't fight his attraction to Debbie, his human female dive partner. She knows there is something special about him but she doesn't know what. But she likes it. Spear does such a great job of showing the conflict between what Allan's mind wants to do and what his heart wants to do. A lot of great romantic angst.

There is also a killer on the loose. And this one is after werewolves. The mystery aspect of the story provided something else for the reader to focus on as well. This book is about romance, but it's also has some great action filled moments that are sure to keep readers on the edge of their seats. Allan and Debbie are both cops that specialize in diving. Allan of course, has a Navy SEAL background. This isn't a police procedural but that part of the book was very interesting and added a lot to the overall story.

One of my favorite series is the way Spear is able to take books about SEAL's, books about Highlanders and books about the original Silver pack and make them all coexist with each other so well. She can shift back and forth between the packs, write books that have crossover characters and write a ton of them and each on seems new and different, yet interconnected with all the others. That's a lot of versatility in one author.

Being the 18th book in the series, some readers might be waning on the popularity of the series. Not me! But there are those out there that may think Spear couldn't possibly be giving us something new with this book, but they'd be wrong. There just wasn't anything I didn't like about this one!

This is a great book and it's part of a phenomenal paranormal romance series. If you haven't taken that leap and tried something out of your comfort zone yet, I encourage you to read this series. Each book can be read as a stand alone including SEAL Wolf in Too Deep. Spear has a knack for writing detailed stories that get the reader in the heart. Good stuff!

SEAL Wolf in Too Deep is available NOW from your favorite bookseller.

USA TODAY bestselling, and award-winning author and creator of award-winning teddy bears who have found homes all over the world including Australia, Switzerland, China, and Russia, and a retired officer of the US Army Reserves, I love to plant trees and flowers and if I could, I'd turn all the deserts green. Time travels are my favorite read, although I love to read most anything, and the Bourne series, Romancing the Stone, Sixth Sense, Legend, The Princess Bride, Stardust, Inkheart, LOTR, and tons of other movies are my favorites.I love to research, to make urban fantasy worlds real, to bring a little of the paranormal into our world. Even in "Winning the Highlander's Heart" the heroine feels she is cursed and she has second sight. But I try to do it in a way that feels real, and not fantasized. :) Currently, I'm working on book 2 of the new jaguar shifter series, but still am working on wolf book number 12 and 13! So more hunky wolves to come! A SEAL in Wolf's Clothing has just released.
Posted by justpeachy36 at 10:00 AM