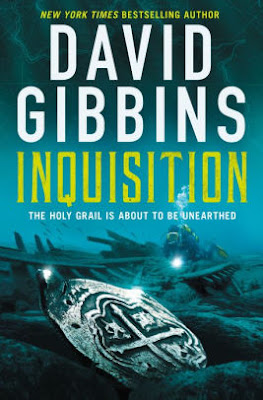 (Received for an honest review from St. Martin's via Netgalley) 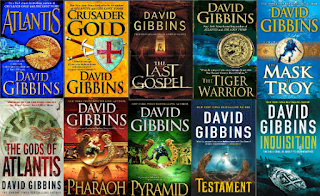 Excerpt from Inquisition, courtesy of Amazon's Look Inside feature


The latest Jack Howard thriller from internationally bestselling mastermind David Gibbins.
258
As the blood of martyred Christians runs through Rome's catacombs, Pope Sixtus entrusts their most sacred object to a devoted follower. Soon after, the Holy Grail disappears into the darkness of time.
1684
While overseeing the evacuation of the English colony of Tangier, Samuel Pepys attempts to retrieve a treasure which has resurfaced after more than a thousand years. Meanwhile, a Jewish merchant is tortured by the Altamanus, a secret group determined to locate the Grail.

Present Day
A wreck off the Cornish coast reveals clues to a mystery that marine archaeologist Jack Howard had thought beyond solving. He embarks on an epic quest that takes him to the sunken ruins of the pirate city of Port Royal in Jamaica. But the specter of the deadly Inquisition dogs his every step, and Jack must face a descent into hell itself if he is to uncover the greatest reward in Christendom.
Gibbins, who has led numerous underwater archeology expeditions around the world, writes with an authority that makes “the astounding seem more than plausible” (Parmenion Books). This latest Jack Howard novel brings together historical details and a thrilling plot for an action-packed adventure.

If you've never had the pleasure of reading about David Gibbins character, Jack Howard you're missing out. Inquisition is the latest book in the Jack Howard series and Gibbins once again brings readers a book that is a mixture of history, science, mystery and thrills. This author's writing is equal parts exciting and thought provoking. The brutality of the Inquisition is the backdrop to this book which has everything from pirate ships to secret societies. A must reader for thriller fans.

This book gave me all kinds of interesting comparison's. Main character Jack Howard had me thinking about bull whips and leather jackets. He reminded me of my other favorite archaeologist... Indiana Jones with maybe a hint of Laura Croft mixed in for those readers who prefer a female badass. But this time we have a marine archaeologist. Which was a pleasant and interesting surprise. I thought Gibbins did a great job with this aspect of the main characters career and motivations. It's certainly easy to tell that Gibbins has dabbled in this kind of work himself. It gave the character an authenticity you don't often find in thrillers. Jack Howard is one of those very interesting people you might meet that come across as academic and nerdy, but they aren't afraid to seek adventure. Great lead character.

I'm always a fan of a book that brings history to the forefront and this one really does. From the title readers will know the time period. The Inquisition was a brutal time in the history of the church and many innocent lives were lost. I liked the fact that Gibbin's dives into the history surrounding the Inquisition and does not sugar coat what was happening in the world at that time. The book shifts back and forth through history as the past is tied to the present while Jack is on the trail of the "holy grail". It was such an interesting historical mystery and Gibbins is able to make it completely plausible that the "grail" existed both then and now. Just a very good mix of historical background and theory.

Secret societies are always so fun to read about. In this book the Altamanus is the bad guy group that is after the "grail" along with Howard. But these guys are not beyond doing some pretty dastardly things to get what they want. As far as villians go, I think Gibbins finds a group that none of us would like to mess with. Serious Illuminati feels here. When belief in something overrides good sense. It added the required conflict and thrills needed to make the chase for the "grail" realistic and scary in a fight for your life kind of way.

There were moments where I felt a little out of my element with this book. There were some technical terms I seriously thought about looking up and bringing a dictionary along isn't fun. But also felt a learned a few new things as well. It's all in how you look at it, I suppose.

There was a lot of excitement and thrills but where were also times when the book dragged a little. There was a ton of history to be imparted as well as mystery and I think that led to a percentage of the book that might not hold the interest of some readers. I liked it, but not it won't be everyone's cup of tea. But it's worth the slow parts to get to the thrilling parts. Hang in there with it and you'll love the outcome.

Great lead character, tons of historical background and leanings toward Tombraider, Indiana Jones and even the Da Vinci Code. If that kind of book is your jam... this one will do it for you. I loved Jack, so nerdy but still so adventurous. Gibbins' gives the historical mystery fans exactly what they want with this one. Very informative and interesting.

Inquisition is available NOW from your favorite bookseller. 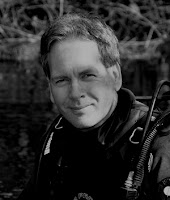 DAVID GIBBINS is the internationally bestselling author of ten Jack Howard novels, which have sold over three million copies worldwide and is published in thirty languages, and the Total War historical novels. He has a PhD from Cambridge University and taught archaeology. He is a world authority on ancient shipwrecks and sunken cities. He has led numerous expeditions to investigate underwater sites around the world. He currently divides his time between fieldwork, England and Canada.
Posted by justpeachy36 at 10:00 AM