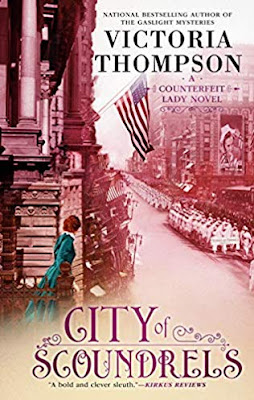 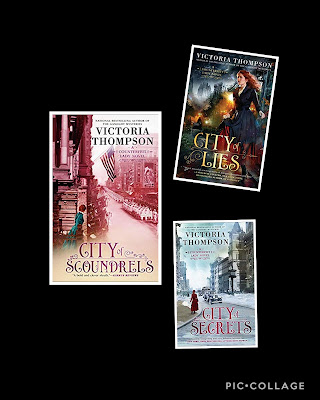 An exciting new book in the series featuring Elizabeth Miles, con woman turned Lady, from the beloved national bestselling author of the Gaslight Mysteries.Elizabeth Miles finds herself in a position no con can help her escape. Her beloved fiancé, Gideon Bates, is awaiting his turn in the draft to fight in the Great War. Elizabeth is finding it hard to think of anything else, but Gideon has thrown himself into his work, preparing wills for soldiers before they ship out. Corporal Tom Preston is part owner of Preston Shoes, a company that is making footwear for the army, so he has a rather large estate. He needs a new will, however, because he has just been secretly married to a woman whom his family would never approve. He wants to make sure she and their unborn child are provided for if he does not return.When Tom is later reported killed, Elizabeth and Gideon learn that the new will has gone missing after Tom's bride revealed her identity to his family. Unless the new will is found and validated, the original will, which leaves everything to Tom's brother, will prevail and the wife and child will get nothing. If Tom's new bride survives, that is. Some terrible threats have been leveled against her, and Elizabeth and Gideon must figure out a way, legal or not quite, to secure Tom's fortune for his wife and child while saving her life in the process.

When it comes to historical suspense, Victoria Thompson is one of the best. Like many of you I am a cozy mystery fan. But I do sometimes get a little tired of magical cats and baked goods...lol. The third installment in the Counterfeit Lady series, City of Scoundrels really hit the spot for me. You get all of the cozy mystery goodness with some hardcore historical background, a bit of espionage and a con that would make any grifter proud!

This one has some bite to it! I like that. I don’t always want fluff and Victoria Thompson proves you can write good clean suspense that will keep you as riveted to the pages as any mainstream mystery or thriller. The historical setting alone makes this novel worth the read. Thompson takes readers to New York City in 1918. Two important historical occurrences were in play, the 1918 flu epidemic and WW1. Both play a significant role in this book and the author does an amazing job of making the reader feel the impact of the times and what it felt like to live through them.

Elizabeth is quite a lady. If you’ve read the previous books in the series you already know that Elizabeth is a “reformed” con artist. Well, not exactly. She still uses her particular set of skills to her advantage and to help people along the way. I like the fact that Elizabeth is a robin hood of sorts. She cons the rich, wealthy scoundrels and helps the poor. In this case, a war widow being cheated out of her husbands money. Elizabeth showed a lot of heart but she also showed her tenacity and determination. You can’t help but love this character!

Gideon is a straight laced lawyer type. How he ends up with a family of grifters is still the real mystery. I loved both angles that Thompson uses with Gideon in this book. Not only is he awaiting his impending deployment to the battlefields of WW1 but he ends up contracting influenza at a very critical time. He has spent his time waiting by making wills for soldiers, a very honorable thing. I always feel like Gideon is just a really good man. He wants Elizabeth to forget her old ways but he can also see the benefits. I loved that he was willing to explore the possibilities.

Not much to dislike about this one, but there one thing I found a little hard to follow. I loved the whole idea of Elizabeth and her family pulling the con to get the widow Rose her due, however the details of the con were somewhat lost on me. I understood the details as they occurred but when they were just discussing it, it’s a lot to process, so keep that in mind.

This is such a great series and Victoria Thompson really writes it well. Her attention to detail, and her knowledge of the period lend an air of authenticity to this novel that is often lacking in some historical cozies. This one should be high on your list of must reads!

City of Scoundrels is available now from your favorite bookseller 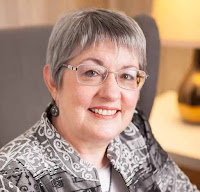 Edgar® Nominated author Victoria Thompson writes the Edgar and Agatha Award nominated Gaslight Mystery Series, set in turn-of-the-century New York City and featuring midwife Sarah Brandt, and the Sue Grafton Award nominated Counterfeit Lady Series set in early twentieth century New York City and featuring con artist Elizabeth Miles. She also contributed to the award winning writing textbook MANY GENRES/ONE CRAFT. A popular speaker, Victoria teaches in the Seton Hill University master's program in writing popular fiction. She lives in the Chicago area with her husband and a very spoiled little dog. "Thompson’s command of period detail and her insight into such issues as the era’s blatant sexism put her in the forefront of historical mystery writers." --Publishers Weekly“Thompson’s fans have been able to witness her fine ensemble cast grow and mellow through time….The stories continue to be engrossing and rich in historical detail as each illuminates another corner of the metropolis.” – Booklist"Don't miss City of Lies, an exciting story of intrigue, deception and love --" --Catherine Coulter, Author of Insidious"Suffragists, socialites, grifters, and goons at the last gasp of the Gilded Age. This is how to start a series! Thompson brings an irresistible heroine onstage, backs her up with a terrific cast of sidekicks, and delivers a rattling good plot. There's rich thread of US history skillfully woven in too. I loved it." --Catriona McPherson, bestselling author of the multi-award-winning Dandy Gilver series."Completely captivating! Clever, engaging and romantic, this unlikely suffragette will have you cheering her courage--and eagerly awaiting her next adventure. Loved it."--Hank Phillippi Ryan, Agatha, Anthony and Mary Higgins Clark award wining author