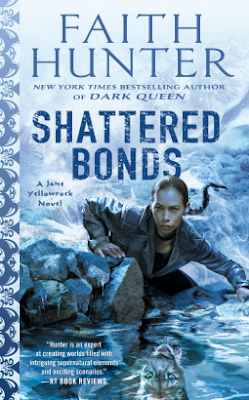 (Received for an honest review from Ace)

Excerpt from Shattered Bonds courtesy of Amazon’s Look Inside feature

Jane Yellowrock must dig deep and find strength within herself if she is to survive in the latest novel in this New York Times bestselling series.Jane Yellowrock is vampire-killer-for-hire, but her last battle with an ancient arcane enemy has brought her low. She seeks retreat in the Appalachian Mountains to grieve the loss of her friends, and to heal—or to die—from the disease brought on by her magic. But malevolent elements in the paranormal community still seek to destroy Jane, and a terrifying foe stalks her, even into the safety of the hills. With nowhere to run and her body failing, the rogue-vampire hunter and her inner Beast must discover a way to defeat this new threat, and find a form that gives her a chance to fight another day.

If you’re looking for good Urban Fantasy reading you can’t go wrong with Jane Yellowrock! Faith Hunter has created a series with the perfect blend of fast paced action, paranormal characters and a smidge of romance. The thirteenth book in the series, Shattered Bonds, finds Jane seriously injured and dying from an incurable magical cancer. Readers will be on the edge of their seats as they watch Jane fight the most terrifying bad guy in the series so far. So much story in one novel! Mind blowing!

What’s not to like with a new Jane Yellowrock book? This is a series that really solidifies for me why I like Urban Fantasy. Sure, I love a good romance. But, I also find that I don’t need that strong romantic undertone to make a book a good read for me. I love action and suspense. A good book with a lot of that often hits the spot for me. Battles and strong characters that must make hard choices just feels good to read about. Let’s face it! We all know I like paranormal characters from ghosts, to witches, vampires, to shifters. Urban Fantasy has all of this and the Jane Yellowrock series hits all the right buttons.

This is book thirteen. Yep, another long running series. Has it gotten boring? Repetitive? Does it just need to end vbefore it’s ruined? No! No! And absolutely not... ever! This may be book thirteen but it proves that there is a lot more story to tell. Old battles. New enemies. Dark undertones but moments of joy. The future for Jane is definitely still evolving. Shattered Bonds is about looking death in the eye and basically saying give it to me and I’ll show you what I got. It’s intense. Its emotional and it will leave your mouth watering for more.

One of the things I really enjoyed in this addition to the series was the interaction between Jane and her shifter alter ego, Beast. If you are new to the series you may not know that Jane is staying in her beastly form more than ever in this book. She is dangerously ill and Beast is not. When she is in that form she is free from pain and better able to sustain under the pressures of magical cancer. Beast is often my favorite character in the Jane Yellowrock books and in this one we get more Beast than ever. It’s wonderful to see the parts of Beast we hadn’t thought about before. Is Beast happy? Is she lonely? Does she have needs of her own that may be being ignored in the face of Janes greater work among the supernatural characters in her world? I loved finding out more about her.

We’ve seen some pretty ugly, mean, down right nasty villains in this series but this one is honestly the worst of the worst. He’s the baddest of the bad. Truly horrific. The second son of darkness is on a rampage after Jane defeated his brother. He’s bent of torturing Jane and one way to do that is to attack her people. Edmund is in the crosshairs of a maniac who uses every torture you can think of. I like bad guys who have roots in reality. This guy reminds me of a real psychopath with no conscience and no remorse. He’s all vengeance and wrath. Terrifying but delicious to read about!

All of our favorites are back in this one, though I actually did miss Leo. Jane’s friends really shine in this novel. Not only do they exhaust every possibility to help Jane find a cure but they get to be the bad asses in this one. Jane’s normally the one that fields most of the trouble in this series. And that’s not say she doesn’t see her fair share in this one, but let’s face it she’s sick and it was nice to see how Bruiser and the rest of the gang pulled the slack.

Well this sometimes happens in the course of writing reviews. I just don’t have anything bad or critical or even slightly negative to say about this one. It was just that good!

If you are a long time reader of this series this book is spellbinding! It was totally unexpected. It was highly unpredictable. Not sure how it could have been any better. If you haven’t read Jane Yellowrock... what in the world are you waiting for?

Shattered Bonds is available now from your favorite bookseller 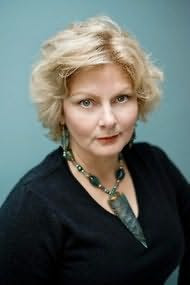 Faith Hunter is the New York Times bestselling author of the Jane Yellowrock series, the Soulwood series, and the Rogue Mage series.
Posted by justpeachy36 at 9:00 AM