Review and Giveaway: The Blooding of Jack Absolute 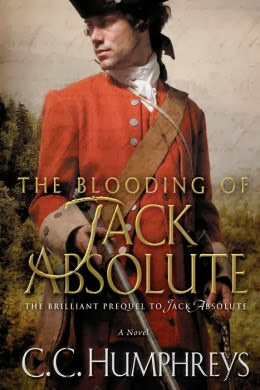 Excerpt from The Blooding of Jack Absolute, courtesy of Amazon's Look Inside feature.

Before he can become a man, he must first learn to kill...
London: 1759: Life is easy for Jack Absolute, a young raconteur loved by the ladies and envied by his schoolmates. With a place secured at university and a baronetcy at hand, his future seems bright—if he can just stay out of trouble. But when Jack is caught read-handed with a powerful lord's mistress, his good fortune is destroyed, forcing him to seek a new fate in the dangerous New World during the brutal Frecn and Indian Wars.
There, marooned amid hostile Indians and fierce colonial rivalries, the bawdy schoolboy disappears and a man emerges. Jack's survival depends on winning the friendship and help of the natives, but those come at a high price. In order to become the man they could eventually trust, Jack Absolute must first be blooded. And in order to be blooded, he must do the unfathomable. He must learn to kill.
The gripping prequel in C.C. Humphrey's riveting historical series, The Blooding of Jack Absolute sweeps readers into the ruthless wilds of North America and tracks the stunning transformation of a young dreamer into a daring, larger-than-life hero.

The Blooding of Jack Absolute is a the prequel to C.C. Humphrey's book, Jack Absolute and the second book in the series. Humphrey's played the character of Jack Absolute in Sheridan's play, The Rivals in the 1980's and fell in love with him. This series chronicles the adventures of Jack Absolute, a man that ladies love, men respect and trouble follows. In this installment of the series, readers learn about Jack's childhood, how he became a spy and how he ended up with Ate, his Indian sidekick. A great adventure story in the wilds of North America, as well as, a tale about the perils of war.

C.C. Humphreys has created such a wonderful character in Jack Absolute. Jack is one of those over-the-top characters that readers are just drawn to. Humphreys portrays him as just about 'perfect in every way'. He is strong and courageous, serving his country and leading himself to success and heroism. But how did such a man become who he was? The Blooding of Jack Absolute takes readers back in time to Cornwall in the late 1700's, where Jack is living a less than perfect life, in the care of his drunken uncle, Duncan and abusive cousin, Craster. Readers get to see Jack as a child, forced to survive the rigors of growing up in an abusive situation. It lends a lot to how he became so persistent and reckless.

A large part of the book details Jack's adventures at Westminster school in London, where he gets an education in more than reading and math. His pursuits include, drinking, gambling and wenching. Which eventually gets him in trouble when he is caught with the mistress of a Lord and must escape England or face the consequences. Humphreys does a fantastic job of showing Jack's reckless personality. He isn't afraid of doing or trying anything. He believes he can survive no matter the circumstances. His time in North America is certainly a testament to his versatility and perseverance. I liked the fact that Humphreys shows the reader again and again, how Jack thinks, what his motivations are and where his heart is.

I learned a lot about survival and the skills of the Native Americans in this novel. As Jack is forced to survive a long winter in seclusion with a Indian we later find out, is his trusted sidekick, Ate. Humphrey's goes into detail about the survival techniques that Ate employs to help Jack and about their relationship. I liked the fact that we get to see how they met and what drove them to the friendship they eventually have. It was a great look back into just how Jack became the man he was.

Jack is in America during the French and Indian War. It was a desperate time and the battle scenes that Humphrey's depicts in this tale are accurate and well written. It is obvious that Humphrey's has done his research for this one and gives the reader a glimpse into the kind of brutality and ruthlessness that goes on in war times. I thought his descriptions, though very graphic were a necessary part of the book for readers to see what this character goes through.

A part of the book that I found very interesting was the humor that Humphrey's includes. It isn't overly funny or out of place in the narrative. It flows naturally and engages the reader. It's nice to have some moments in the story where adventure takes a back seat to a good old fashion belly laugh. I thought Humphrey's used humor to his advantage and it helped give the book just the right amount of comic relief.

Overall this is a great adventure story. Fans of Jack Absolute will love learning more about him as a boy and how he became the hero. I found it interesting from a military perspective and from a historical viewpoint. A very enjoyable book!

Jack Absolute is available NOW from your favorite bookseller. Chris (C.C.) Humphreys was born in Toronto, lived till he was seven in Los Angeles, then grew up in the UK. As C.C. Humphreys, Chris has written seven historical fiction novels. The first, 'The French Executioner' told the tale of the man who killed Anne Boleyn and was runner up for the CWA Steel Dagger for Thrillers 2002. Its sequel, 'Blood Ties', was a bestseller in Canada. Having played Jack Absolute, he stole the character and has written three books on this '007 of the 1770's' - 'Jack Absolute', 'The Blooding of Jack Absolute' and 'Absolute Honour'- short listed for the 2007 Evergreen Prize by the Ontario Library Association. All have been published in the UK, Canada, the US and translated into Russian, Italian, German, Greek and Czech

The publisher is sponsoring a giveaway for one copy of The Blooding of Jack Absolute by C.C. Humphreys.

~ You must be an email subscriber to participate.
~ US and Canadian Addresses only.
~ The deadline to enter this giveaway is Midnight EST, December 4th.

1. Please leave a comment describing your favorite time period for historical fiction.
2. Please fill out the FORM.
Posted by justpeachy36 at 11:00 AM

My first pick for favorite time period is the 1700s - 1900 and my second pick is the medieval time period. I am a huge fan of historical fiction. I have the first book in this series and would love to win this one. Thank you for the chance.

I have lots of favorite time periods for fiction. Usually I prefer an era where something revolutionary is happening like the American or the French Revolutions.

My favorite era for historical fiction is 1920-1930. Thanks for this giveaway. saubleb(at)gmail(dot)com

I like stories set during the Civil War. Gone With the Wind is my favorite.

i enjoy pretty much any era when it comes to historical fictions......

thank you for the giveaway!!

I will read any time period. But Revolutionary War era is my favorite.
campbellamyd at gmail dot com

My favorite time period for historical fiction is during the 1800's in the American west.