Review: How to Handle a Highlander 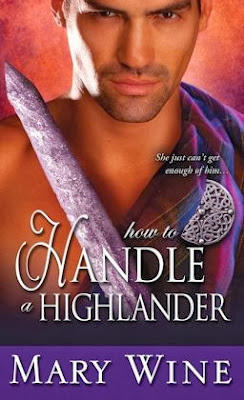 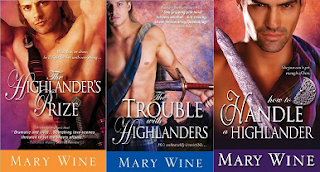 Excerpt from How to Handle a Highlander, courtesy of Amazon's Look Inside feature.

In a Land of Warriors Playing a Deadly Game...
Moira Fraser has been given an ultimatum—marry the elderly Laird Achaius Morris, or risk another deadly clan war. She vows to do the right thing, as long as she can steer clear of the devilish charms of one stubborn Highlander...
How Do You Avoid Becoming a Pawn?
Gahn Sutherland knows there's a dangerous plot behind Moira Fraser's wedding, and will stop at nothing to foil it. But where a hot-headed, fiery Highland lass is involved, trust and honor clash with forbidden attraction, threatening to blow the Highland's sky-high.

Any book with a highland setting has to take into account the strong clan bonds and the sense of loyalty and honor to clan that is so inherent in the highland people. Mary Wine pays homage to that highland spirit in her latest book, How to Handle a Highlander, the third book in the Sutherland series. Wine not only does research into the costumes and customs of the times for her writing but she is skilled at understanding the highland way of life and the makeup of the people. These men were warriors and their women were strong and resilient. Wine brings readers a tale of love and betrayal and what it means to be family.

As always I have a keen interest in how books about the highlands describe and portray the highland people because of my own ancestry. It is always important to me that not only does an author get the scenario right and how things are done, but also the spirit of the people and Mary Wine does an excellent job of getting to the heart of her characters and showing her readers a side of the highland people they might not otherwise see.

In How to Handle a Highlander Wine gives us a woman who is deeply devoted to her clan. Moira Frasier is willing to sacrifice her own happiness to see that her clan is protected and not thrust into a war, despite the fact that her heart belongs to Gahan Sutherland. She will marry an aging Laird with schemes of his own because her half brother who has nothing but contempt for her wishes it to be so. Moira is a woman after my own heart. She is strong and courageous and knows that the good of the many sometimes outweighs the good of the few. She is steadfast in her loyalty to the people she cares for and that includes Gahan. I liked the fact that Wine makes her beautiful, but capable of just about anything.

Gahan is also an interesting character who knows what he wants and how to get it, or so he thinks. He is thwarted at every turn as he tries to free Moira from a loveless marriage to man whose greed knows no bounds. Gahan understands that he is taking a huge risk in loving Moira Frasier but he isn't willing to give her up. I liked the fact that he was focused and didn't let anything stand in his way. He was resourceful and tried a good many things before he finds what works. He didn't give up and Wine knows that's how a true highlander would be. They are passionate people who love just as hard as they fight and Gahan proved that out in this book.

There is so much going on in this novel. There are schemes and plans on top of plans. Bari Frasier wants his half sister to marry Matherson so they can unite and destroy the Sutherland's in retribution for his sister Sandra's death. Matherson realizes that Gahan loves Moira and will stop at nothing to get her. His agenda is more about taking the Frasier lands. It's all a game of cat and mouse and who will win the final prize. It's like the three clans are in a struggle with each other and each one is focusing on a different one. When it all starts to shake out and it's apparent that war is looming, the pace of the book really ramps up giving the reader not only an excellent romance, but a great adventure as well. I enjoyed that part of Wine's book very much.

The romance between Gahan and Moira is very hard won. But I think readers will love all of the things these two must go through to get their happy ending. It makes every scene between them literally spark with anticipation. When they come together the chemistry is palpable even through the pages of a book. I think Wine places just the right amount of emphasis on the love scenes, creating a good balance between action and romance. This one is definitely hot. There are scenes that will curl your toes, but that's to be expected when you have passionate characters and life and death often hangs in the balance.

Overall I thought this was a well written and researched novel. Wine knows her stuff and that's why it is always enjoyable to read any of her books. I recommend them all to readers who are looking for a good accurate idea of the highland spirit and clan dynamics. How to Handle a Highlander is my favorite of this series.

How to Handle a Highlander is available NOW from your favorite bookseller.

Don't forget to check out Mary's guest post and giveaway as well.