Review: Daughter of the God-King 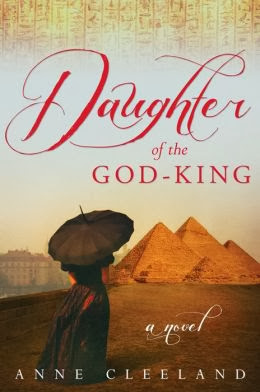 Daughter of the God-King by Anne Cleeland

Excerpt from Daughter of the God-King, courtesy of the author's website.


The Cursed Tombs of Egypt Hold Many Secrets...
Miss Hattie Blackhouse has never been close to her parents...and no wonder, since the Blackhouses are renowned scholars who spend most of their time excavating ancient tombs in Egypt. But news of their disappearance forces Hattie to leave England and embark on a voyage that will reveal the long-buried secrets of her past. An encrypted senet board and a gold medallion lead Hattie on a perilous quest to track down her missing parents—and discover why people associated with the Blackhouses continue to turn up dead. What she uncovers is a secret that could alter the course of history...
Filled with intrigue, romance, and ancient secrets, Anne Cleeland's thrilling novel takes you on an unforgettable Egyptian adventure.

Anne Cleeland's Daughter of the God-King is a Regency novel with an Egyptian twist. Napoleon is in exile and Europe is quite a mess during the time period of this book, which makes the atmosphere ripe for a political intrigue and mystery. Cleeland's book is a mix of genres. Romance, mystery and history collide to provide the reader with a reading experience they won't soon forget. Witty dialogue, in depth character development, and a lush and vibrant setting combine to make this a book that is a feast for the senses as well as the mind!

Anne Cleeland's first book, Tainted Angel was also set in the Regency period and saw much praise for it's fast paced historical mystery theme. Her second book, Daughter of the God-King in comparison has many of the same qualities but also introduces some vast differences as well. Cleeland writes historical fiction with a touch of light romance and leans heavily on a thriller/mystery angle. This novel is no exception. Daughter of the God-King is very fast paced and moves with lightening speed toward the conclusion, but there is so much happening a long the way readers will be both stumped and curious as to the outcome.

There are tons of characters to keep track of in this novel. That's the easy part. There is the main character, her parents who are missing, her companion, a love interest, the French, the British, the Egyptian's and many other secondary people, who have an interest in the outcome of the story. They each play an integral part in the bi-play and fabric of the story and Cleeland is a master at development. The characters are easy. But keeping up with all of the different motivations and reasons each of these characters has for flocking around English heiress, Hathor Blackhouse, can be quite confusing. Readers may need a little background on the times to understand everything that plays a part in this one, but it's well worth the time to find out.

Named for the goddess of fertility, Hattie Blackhouse is quite the main character. She is intrepid and resourceful  She has a temper and she has been contained for far too long. Her parents are highly successful Egyptologists and they have spent their lives in the Valley of the Kings, leaving their daughter a somewhat neglected childhood. But once she decides that she is the maker of her own destiny things change drastically for her. Hattie starts her quest for change in Paris, where she learns that her parents are missing from a Thebian dig site, revered to be the grave of the daughter of Seti I. She tackles a little bit of everything in her quest to find her parents and Cleeland does a masterful job of showing how she grows and changes along the way especially in the development of her feeling for Berry.

Berry is a mysterious acquaintance of her parents, who Hattie initially meets as she finds him searching her room. Berry has this air of sophistication about him that readers will love. Throughout most of the book, they won't be able to figure out just who's side Berry is really on. Hattie's feelings for him grow, as she learns more about him, but he's hiding something and Cleeland makes that into a mystery in itself. The dialogue between Berry and Hattie is captivating. Cleeland does an excellent job of building tension between them and keeping the reader guessing as to Berry's intentions.

One of the most prominent parts of this book, is the setting. Without the Egyptian setting this book would not have been nearly as interesting. There is always a mysterious attitude when it comes to the tombs and burial sites of the Pharoah's and the members of their families. It's an intriguing idea to most people. It's elusive and alluring at the same time. Why did they bury them with specific things? What are they worth? Who has access to them? All questions that this setting evokes, with really helps with this quest that Hattie has taken on. When it becomes apparent that some think she may be the incarnation of Seti I's daughter, the story really takes on new significance. Cleeland describes all of these details with a bit of detachment but with strong descriptive adjectives that will allow the reader to almost see what the characters are seeing and experiencing. It's a feast to be sure. Readers will feel the blowing sand and the Egyptian heat. Almost her the voices of the dead and it all wraps around a great mystery.

This is definitely a book I would recommend to readers who like their Historical Fiction with some thrills and spills and with an edge of mystery about it. Cleeland does a great job of flawlessly meshing all of these genres together to produce a very well rounded and entertaining novel. It does drag a little in the middle, but when the action picks back up readers will be glued to the final pages.

Daughter of the God-King is available NOW from your favorite bookseller. 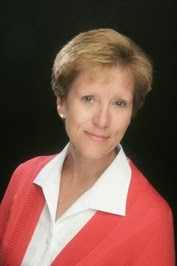 Anne Cleeland holds a degree in English from UCLA as well as a law degree from Pepperdine University and is a member of the California State Bar. She writes historical fiction set in the Regency period and contemporary romantic suspense. A member of the Historical Novel Society, she lives on Balboa Island, California and has four children. Her first novel was Tainted Angel.

Head over to Manga Maniac Cafe for a chance to win a copy of Daughter of the God-King by Anne Cleeland. The giveaway will be going on for several more days. Don't forget to check it out!
Posted by justpeachy36 at 11:00 AM