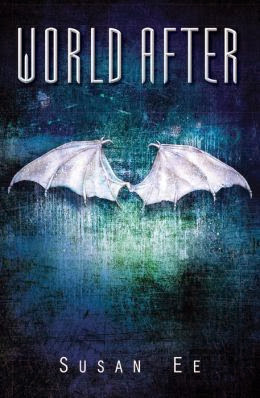 (Received for an honest review from Skyscrape) 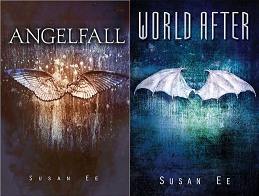 Excerpt from World After, courtesy of the author's website.

In this sequel to the bestselling fantasy thriller, Angelfall, the survivors of the angel apocalypse begin to scrape back together what's left of the modern world. When a group of people capture Penryn's sister Paige, thinking she's a monster, the situation ends in a massacre. Paige disappears. Humans are terrified. Mom is heartbroken.

Penryn drives through the streets of San Francisco looking for Paige. Why are the streets so empty? Where is everybody? Her search leads her into the heart of the angels' secret plans, where she catches a glimpse of their motivations, and learns the horrifying extent to which the angels are willing to go.
Meanwhile, Raffe hunts for his wings. Without them, he can't rejoin the angels, can't take his rightful place as one of their leaders. When faced with recapturing his wings or helping Penryn survive, which will he choose?

World After by Susan Ee is one of the most highly anticipated young adult releases of the year. World After is the second book in the Penryn and the End of Days series and picks up where the first book, Angelfall ended. YA readers who enjoy a taste of Dystopia, and Post Apocalyptic world building will fall in love with this series. It has elements of horror, fantasy, urban fantasy and even a touch of romance. Ee's straightforward writing style and her ability not to shrink from the horrors of a world gone bad makes this book a must read. With it's dark, edgy atmosphere and rich angel mythology, World After is a great YA read, with enough tension and urgency to keep readers turning those pages.

First of all let me say that it is probably a really good idea to read Angelfall before you pick up World After. I'm not really sure they can be read as stand alone's. There is just too much going on and too many important details that I think the reader would miss out on without having the first book to go from. At the end of Angelfall readers were treated to an awesome cliffhanger that had them clamoring for more. It took almost two years but Susan Ee gives readers what they wanted with World After. But it was well worth the wait! This is such an excellent book!

The world building alone in this series is enough to draw readers in. Ee has created a post apocalyptic world that we have not necessarily seen in YA writing before. This is a world where a character we generally consider a good-guy has become a very evil bad-guy. Angels are full of light and peace and all things good. Not so, with Ee's angels. These guys are as ruthless and manipulating as any villains you will find in other stories. The mythology is riveting. And what they have done to the earth is so creepy and scary that younger readers might have some issues with the violence and horrific circumstances. It's just that dark!

Penryn was believed to be dead at the end of Angelfall and her angel protector and friend Raffe is gone, heartbroken and desolate. In World After, Penryn survives and tries to acclimate herself and her sister Paige back into the resistance. Paige is not the same little girl the angels took in Angelfall. She is considered by the rebels as more monster than girl. Penryn has a difficult time with her feelings regarding Paige and when Paige disappears Penryn is off again after her. I liked the fact that Ee doesn't make it easy for Penryn to reconcile how she felt about Paige before and how she feels now. She shows a lot of vulnerability and strength. I thought it was well written and believable.

I missed Raffe during most of this novel, because he is off trying to find his stolen wings. But I knew that Ee would reintroduce him when it was time. Though he doesn't appear for the first two thirds of the book, when he does, it's magic. The reunion between Raffe and Penryn was exceptional. I thought the author did a great job of building a lot of tension leading up to Penryn and Raffe seeing each other again, by delaying it for most of the book. I think Raffe will no doubt have a much bigger role in the next novel. He is such a great character. You have all of these angels that are so awful and then you have Raffe. He may not be perfect but he is solid. His affection for Penryn is real and very obvious. He may be a big strong angel, but when it comes to Penryn he becomes softer and more vulnerable. What a great character!

I really felt that World After focused a lot more on Penryn and how she is evolving during this very scary time. How she is becoming the person she was meant to be. She is training, fighting and leading like she never has before. In Angelfall she played second string to Raffe. He was the hero and she was essentially his charge. In World After she really comes into her own. It's in a sense a coming-of-age type scenario. I thought Ee did a great job of putting Penryn in so many different circumstances where the reader is able to see her growth. That was a very good part of this novel.

At times it made me cringe, it made me have to look away from the page and gather myself. It made me happy and sad and made me wonder what life would really be life after a catastrophic event. But mostly it left me in awe of Susan Ee's writing. She is a gifted storyteller. She tells it like it is. She doesn't shy away from the scary stuff and she doesn't sugar coat anything. I liked the fact that a lot of questions from Angelfall are answered in World After but Ee also provides new questions and another cliffhanger of sorts. We find out why the angels took over, what they have in mind and what it might mean for mankind. It's a thrill ride to be sure. If you like dystopian, post apocalyptic writing, you can't miss this one... it's just that good!

World After is available NOW from your favorite bookseller. 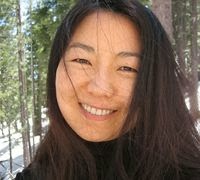 Susan Ee has eaten mezze in the old city of Jerusalem, surfed the warm waters of Costa Rica, and played her short film at a major festival. She has a life-long love of science fiction, fantasy, and horror, especially if there's a touch of romance. She used to be a lawyer but loves being a writer because it allows her imagination to bust out and go feral.

Head on over to The Flyleaf Review for a chance to win and ARC of World After by Susan Ee. You have until December 3rd.
Posted by justpeachy36 at 10:00 AM