Review: To Have and To Hold 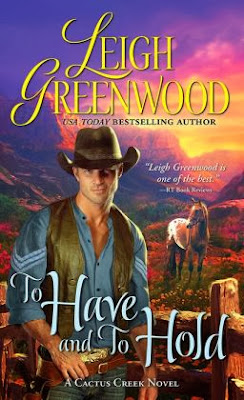 Leigh Greenwood on the WEB:

Excerpt from To Have and To Hold, courtesy of Amazon's Look Inside feature.


A Stranger to the Rescue
Colby Blaine has been a longer his whole life. And he isn't about to change now. But that doesn't mean he can ignore people in trouble. When he rides up to an inexperienced wagon train under attack, he doesn't hesitate to jump into the fray. It's only after the raid that he really lands himself in hot water...
Naomi Kessling is certainly grateful to Colby for saving her family and agreeing to lead their train to safer territory. But the man has an infuriating way of knowing just how to get under her skin—he asks too may questions about a past she doesn't want to remember, and his touch makes her long for far more. Yet the more time they spend together, the more Naomi sees that perhaps it's Colby who needs rescuing the most...

Author Leigh Greenwood isn't your typical romance writer and his, not her, stories show that different perspective on every page. Greenwood's latest book, To Have and To Hold is the first book in his Cactus Creek Cowboys series. Fans and new readers alike are treated to a solid western historical romance, involving a stranger who saves the Spencer's Creek wagon train and leads them to safety in Santa Fe. Greenwood's straight forward approach to writing lends itself to a certain authenticity that is sometimes lacking in the genre. His research skills are evident and his attention to the romance is exceptional.

I have to say that I have always been skeptical when it comes to men writing romance. Let's face it ladies, they just don't think the way we do. Leigh Greenwood's romances are not your typical, boy meets girl, they fall in love and live happily ever after stories, but I think that's the beauty of it. A male perspective on things is often less crowded with fluff and more logical. That doesn't mean that women don't know what they are talking about, they are just more emotional, more focused on the feelings involved. So I expected this book to have less romance and more western adventure, but I will have to say that Greenwood had a very good balance in To Have and To Hold.

Greenwood's research on the Santa Fe trail and the hardships facing those who traveled it, was very well done and thorough. I thought Greenwood did a great job of showing what this wagon train was facing and how so many of the people who went west were unprepared for the journey and the situations they would face. It was interesting to see how Colby and Naomi, the main characters, were able to interact with each other and their environment. I liked how Colby taught Naomi many of the things she would need to know to survive in the West and how their admiration for each other grew through that.

Naomi is a strong woman, who has cared for her father's household for many years and she feels capable and ready to face adversity. But she is troubled by the vague reasons behind the Spencer's Creek people leaving their home in Kentucky and how she and her nightmares are involved in that decision. I liked the fact that Greenwood used secrets to add to the tension of the story. The secrets were not even known completely by the heroine and that made of an interesting twist. Naomi was very distrustful of Colby and I felt that was somewhat misplaced. She is having frightening nightmares about a Union solider, so perhaps she believes it to be a bit prophetic, but I think Greenwood let that aspect of the story go on a little too long, before these two finally got together.

Colby was a great hero! He was strong and sure of himself. He may have been a loner, but he wouldn't sit by and watch the wagon train be destroyed. He had his reasons for not being around people much, because he had suffered in his past. I liked the fact that Greenwood allowed readers to see Colby's deep longing for a family and how much that meant to him. I liked how he showed his feelings for Naomi. She intrigued him, but he didn't over think it, he just lets is unfold in a natural way.

I was really surprised that Greenwood, being a man, was able to really translate the love that was growing between these two. Colby and Naomi start out as distrustful, but slowly begin to see things in each other to appreciate and a friendship grows out of necessity as much as anything else. But it ripens and changes slowly and steadily. It wasn't a whirlwind romance and the book isn't a fast paced adventure. It's a low key, heart felt story about two people who find love. There are certainly adventurous moments, but that isn't the focus of the book. I liked it. It was different and refreshing. I look forward to the next book in the series.

To Have and To Hold is available NOW from your favorite bookseller. 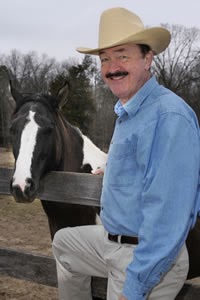 Leigh Greenwood is the USA Today bestselling author of the popular Seven Brides, Cowboys, and Night Riders series. The proud father of three grown children, Leigh resides in Charlotte, North Carolina. He never intended to be a writer, but he found it hard to ignore the people in his head, and the only way to get them out was to write. Visit him at www.leigh-greenwood.com.

Head on over to Martha's Bookshelf for a chance to win an ARC copy of To Have and To Hold by Leigh Greenwood. You have until November 29th.
Posted by justpeachy36 at 10:00 AM