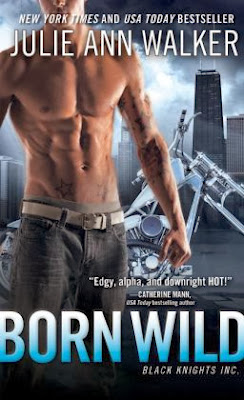 Excerpt from Born Wild, courtesy of the author's website.


New York Times and USA Today bestselling author Julie Ann Walker dives back into action with the red-hot romantic suspense Black Knights Inc. series! They claim they're bad-boy bikers who own custom motorcycle shop, but these special-ops guys—a mix of Navy SEALs, Army Rangers, Marines, FBI and more—handle the jobs too tough for the government to tackle.
TICK...TICK...
"Wild" Bill Reichert knows a thing or two about explosives. The ex-Navy SEAL can practically rig a bomb blindfolded. But there's no way to diffuse the inevitable fireworks the day Eve Edens walks back into his life, asking for help...
BOOM!
Eve doesn't know what to do when the Chicago police won't believe someone is out to hurt her. The only place to turn is Black Knights Inc-after all, no one is better at protection than the covert special-ops team. Yet there's also no one better at getting her all turned on than Billy Reichert. She has a feeling this is one blast from the past that could backfire big time...

The fifth book in the Black Knights Inc. series by Julie Ann Walker is finally out! Readers have been waiting a bit impatiently for Wild Bill and Eve's story and will be well satisfied with Born Wild! Walker uses her trademark wit and sassy dialogue along with some super sexy heroes to give this romantic suspense novel just the right amount of punch. What can be more seductive than a group of former under cover ops men on motorcycles? Not too much!

What can I say about this series. If you like strong alpha males with a purpose... this one might be for you. If you like heroines with heart and guts... this one might be for you. If you like a book that doesn't conform to convention in theme or language... this book is definitely for you! Julie Ann Walker has written the Black Knights Inc. series for readers who are tired of the same old tried and true formula in romantic suspense. She shakes it up by making her heroes anything from once upon a time Navy SEALs to former FBI agents. And she adds in a motorcycle culture theme that has fans raving for more. It's like Sons of Anarchy minus the law breaking! These guys might be tough for a change the bikers are the good guys.

Born Wild is the fifth installment in the series and it doesn't look like Julie Ann Walker is going to give up on the Black Knights any time soon. Wild Bill and Eve have a tragic past. They loved and lost for a lot of reasons and now they are given a second chance. What has changed? A lot. What remains the same? their feelings for each other. But is that enough? Walker does a great job of building up this relationship and readers will be glad that these two finally get their happy ever after. It's a hard fought one to be sure, but that just makes it all the more satisfying.

When Bill and Eve were together 12 years ago, she was a different person. She was daddy's little girl, spoiled, rich, shy, and way to quiet. She did everything she was told, had every decision made for her and now she's in trouble and nobody will listen. Except Wild Bill and his black ops buddies. Eve has changed. She's grown up and realizes that she's tired of being pushed around, tired of being walked on. She is learning to find herself and what she wants out of life until someone thinks that killing her is a good idea. What a great character. I love the fact that Walker is giving Eve a backbone. She's let her stand up for what she believes and who she believes in and her growth as a character throughout this book is a joy to read. I loved her inner dialogue and her effervescent spirit.

Wild Bill is just that... wild. The nickname didn't stick for nothing. He is one of the best demolition experts to have been a part of the Navy and he is hands down one of the Black Knights most sexiest members. He is courageous and full of steel, right down to his bones, but he has a vulnerable spot... Eve. She makes his anger, sad, horny and just about everything else. When it comes to her, he has no control. But he's also hurt by her betrayal from the past. It takes a strong man to get past something like that and readers will have no doubt that Wild Bill is one of the strongest. Walker makes him tough but she also shows his softer side. I liked seeing the big man, become a cuddly teddy bear.

There are other great characters from previous books. I always love great supporting characters like Mac and Ace and the addition of Delilah was delightful. I'm looking forward to Mac and Delilah story in the next release in the series. This novel has a lot going for it. A great mystery. Romance that sizzles. A touch of humor and more pop culture language and sayings that you can shake a stick at. It was well written and just a really sexy fun read. These guys are hard as nails but their kittens when it comes to love!

Born Wild is available NOW from your favorite bookseller. 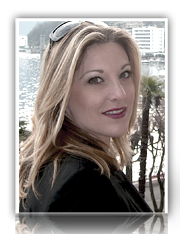 Julie Ann Walker is the New York Times bestselling author of the Black Knights Inc. romantic suspense series. She is prone to spouting movie quotes and song lyrics. She'll never say no to sharing a glass of wine or going for a long walk. She prefers impromptu travel over the scheduled kind, and she takes her coffee with milk. You can find her on her bicycle along the lake shore in Chicago or blasting away at her keyboard, trying to wrangle her capricious imagination into submission.
Posted by justpeachy36 at 11:00 AM