Review: The Girl Who Chased The Moon

My Synopsis:
The Girl Who Chased The Moon by Sarah Addison Allen
(For review from Pump Up Your Book Promotions - Blog Tour dates March 1-26)
Emily Benedict comes to Mullaby, North Carolina to live with her grandfather after her mother's death. But, life in Mullaby isn't exactly what she expected. With a giant for a grandfather, wallpaper that changes with her moods and the reputation of her mother to live down, Emily is a bit overwhelmed.
Julia has a two year plan. A plan to pay off the mortgage on the restaurant she inherited from her father and then sell it for a tidy profit. This will allow her to follow her dream of having her own bakery in Baltimore. But her plan has a few problems, including a long lost love from her past and a secret from her past.
Will Emily find out what her mother did to make everyone in Mullaby hate her? What are the strange Mullaby lights? Will Julia finally tell Sawyer her secret?
My Thoughts:
Sarah Addison Allen has done a wonderful job of mixing in a hint of the supernatural in, The Girl Who Chased the Moon. From the strange Mullaby lights to Sawyer's "sweet sense". It really added a lot of mystery to the book.
I loved the characters and I really identified a lot with Julia. She was loner, someone who didn't quite fit the mold in high school. She had a lot of personal problems, after the death of her mother and the remarriage of her father. But, we see how much she has grown over the years and really come into her own as a person. She is comfortable with who she is and understands what she's lived through. Just a really great character!
Emily is a young girl who has had a lot to live up to, and now she has a lot to live down. It's a big contrast and one that is able to show the reader a lot about tolerance and acceptance. This book has a great deal to do with looking a little bit deeper than the surface when it comes to people. I loved it. A great feel good story, with a great ending.
I will give this one a 4 out of 5 apples from my book bag! 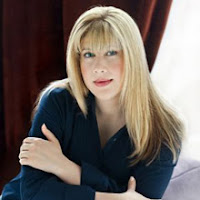 Here is seven things that you might not know straight from the author, Sarah Addison Allen.
When I was a kid, I wanted to be a trash man. I would spend hours daydreaming about riding on the back of a garbage truck, jumping off at every house and dumping people’s trash into it.
I was born and raised in Asheville, North Carolina, a place Rolling Stone magazine once called "America’s New Freak Capital."
I have my B.A. in Literature, a major I chose because I thought it was amazing that I could get a diploma just for reading fiction. It was like being able to major in eating chocolate.
I can’t turn away stray cats and I’m convinced they know this.
My father was a copy editor, reporter and award-winning columnist for our local paper.
My mother has a nose ring, but we pretend it’s not there.
Garden Spells, my mainstream debut, didn’t start out as a magical novel. It was supposed to be a simple story about two sisters reconnecting after many years. But then the apple tree started throwing apples and the story took on a life of its own...and my life hasn’t been the same since.

Thanks for hosting Sarah today. I'm glad you enjoyed the book. It's been very popular during her tour.

Pump Up Your Book

(Diane) Bibliophile By the Sea said...

Nice review Debbie. I liked this one, but her first book was still the best one for me.

I look forward to reading that one as well, now that I am familiar with Sarah's work.