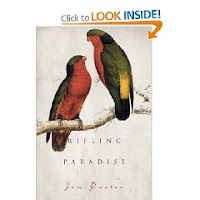 My Synopsis:
Rifling Paradise by Jem Poster
(For review from Overlook Press)
Charles Redbourne was trying to live down a scandal. His behavior was not what was expected of an English landowner. He had to get away, get back to roots, his dreams of being a naturalist. With the help of his uncle, Charles embarks on an adventure in the Australian outback. Then he meets, Eleanor.
Eleanor Vale has secrets of her own. Since the death of her mother, her relationship with her father has taken a drastic downward turn. She is stubborn and high strung. She does not act like any lady, Charles has ever met.
Charles and Eleanor's relationship is brought to a head, when a expedition into the Blue Mountains takes a tragic turn. Will Charles learn to trust himself? Will Eleanor be able to let go of the past?
My Thoughts:
This book was very different from something I would normally read. When I first began reading I wasn't sure that I liked Charles very much, but I did see something in him that is innately human. He was weak and afraid. He was unable to face the truth about himself. When he journeyed to Australia he learned what he was made of. He was put on positions that allowed him to learn about himself and the world around him.
He encountered views from other people that he never expected and desires within himself that he did not know he possessed. His relationship with Eleanor leaned more toward obsession than true love or anything like that. He was enthralled by her. Eleanor saw him as her salvation. As the person who would free her from her father and his tyranny. In the end readers are probably not sure who actually saved who?
This was a good book, and Jem Poster has done an excellent job with these characters and keeping the suspense alive until the end of the story.
This book is available from your favorite bookseller now!
I give this one 3 out of 5 apples from my book bag!

I've never seen any book with such setting before. And to be honest, I don't think it is striking. Perhaps if the cover is a bit better than it is, it could attract more audience?