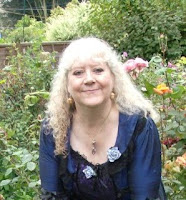 Helen Hollick lives in London with her husband Ron and her daughter Kathy. In between researching the background information for her pirate series about Jesamiah Acorne she manages three Myspace profiles, is researching for her next historical novel, looks after the family cats, dogs, ducks and horses and is on the production team as co-script writer for a possible future movie - 1066. She has a university diploma in early medieval history - and a passion for pirates.
Posted by justpeachy36 at 12:27 PM

Thank you so much for this lovely write-up. I've had a real "down" day today, so your words have brightened my spirits again.
One thing - there will be more Sea Witch Voyages, not just these three. Voyage Four is already under way