Synopsis:
IT SHOULD HAVE BEEN A SIMPLE MISSION...
Pararescueman Wade Rocha fast ropes from the back of a helicopter into a blizzard to save a climber stranded on an Aleutian Island, but Sunny Foster insists she can take care of herself just fine...
BUT WHEN IT COMES TO PASSION, NOTHING IS EVER SIMPLE...
With the snowstorm kicking into overdrive, Sunny and Wade hunker down in a cave and barely resist the urge to keep each other warm... until they discover the frozen remains of a horrible crime...
Unable to trust the shady local police force, Sunny and Wade investigate, while their irresistible passion for each other gets them more and more dangerously entangled...
Thoughts:
Award-winning author, Catherine Mann brings readers a new series based on the Elite Forces, pararescue units, a part of the U,S. Air Force. Readers who are familiar with Mann's writing know that she is known for heart-stopping romantic suspense, and her latest book Cover Me is no exception. With charismatic characters, an in depth, suspenseful plot and a lot of twists and turns, readers will find it hard to put this one down. A great action packed read for all those people out there that find a man in uniform hard to resist!
Sunny Foster is a survivalist guide living in a remote community in the Aleutian Islands off Alaska. When she is mistakenly identified as a stranded climber, Wade "Brick" Rocha is sent to bring her home safely. Wade is a part an elite pararescue group sent out on military and civilian rescue missions. Even after Wade realizes that Sunny is able to take care of herself, he still feels drawn to her. With a snowstorm bearing down on them, Sunny and Wade take refuge in a cave to wait out the storm. When they make a grizzly discovery of dead bodies frozen in the ice, Sunny knows that the police force in the area isn't up to the challenge of figuring out who the killer is and who his next target might be. With the growing attraction between them coming to a head, Wade and Sunny investigate a crime that may end them up in more than just hot water.
This was my first experience with military romantic suspense and I'll have to say Catherine Mann makes it look easy. She has taken one of those old cliches that says 'women can't resist a man in uniform' to new heights. I think a series based on any Elite Force group would be very timely and current in our society right now. Considering the war on terror and so many military families and servicemen overseas and at home, I think this was a brilliant idea. Mann has a knack for writing good military characters. Using her own experiences as a guide she allows the reader a glimpse into what kind of man, a military man is. He is loyal and trustworthy, he believes in God and country and protecting the innocent. I loved her portrayal of Wade and I think readers will too!
Wade Rocha is a character that is what women expect from someone who is in the military. He is stubborn, resourceful, and full of passion for his job and everything else in his life. Wade comes across as a take charge kind of person, but his motives are clear and concise. With Sunny he meets his match. She is headstrong, has almost as much survival training as he has and she not only stands her ground, but she is also passionate about her own causes. I think Mann has created a couple that can stand up to each other, as well as, any other situation that comes their way. But they are a little bit thunderstuck by their reaction to each other. Mann definitely shows the heat and the passion between them in several steamy scenes that readers will adore. The romantic aspect of the book was well written and comes across as natural and unforced.
In the suspenseful part of the book, Mann decides to take on a killer who has tried to let nature dispose of the bodies. Unfortunately, the killer didn't expect to find a survival guide and a pararescue tech stumbling across his burial ground. I thought this part of the book really amped up the action and adventure in the story. When I think of a military hero, I think of secret missions and over the top scenarios and I think Mann really captured that feeling in this book. Cover Me has all the passion a romance reader needs and all of the mystery and suspense that main stream readers and suspense enthusiasts want. It's the total package!
I recommend this one to a wide variety of readers. Those interested in the military and the pararescue units, those who want a steamy romance, even those who are looking for a mystery or suspense that packs a punch. This is a relatively quick read at under 400 pages and fits a lot of action into a short space of time. It's a hard one to put down so don't start reading at midnight, you'll be up all night! A great first book in a new series and I'm sure readers will be on the edge of their collective seats waiting for the next installment.
Cover Me is available NOW from your favorite bookseller.
I'm giving this one 5 out of 5 apples from my book bag! A great military romantic thriller! 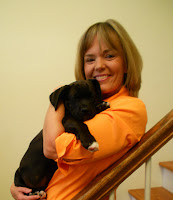 Catherine Mann's military romances have sold over 2 million copies and have been on the USA Today and WaldenBooks bestseller lists. She has won the RITA, Bookseller's Best Award, and finaled for other awards including RT Reviewers Choice and the Maggie. Her husband is an Air Force Colonel and they live near Pensacola, Florida.
Check out my sidebar for a chance to win one of two copies of Cover Me!
Posted by justpeachy36 at 2:30 PM

Hi Debbie, what a nice review. If I didn't already have this book, I would certainly check it out based on what you wrote here. Great job!!