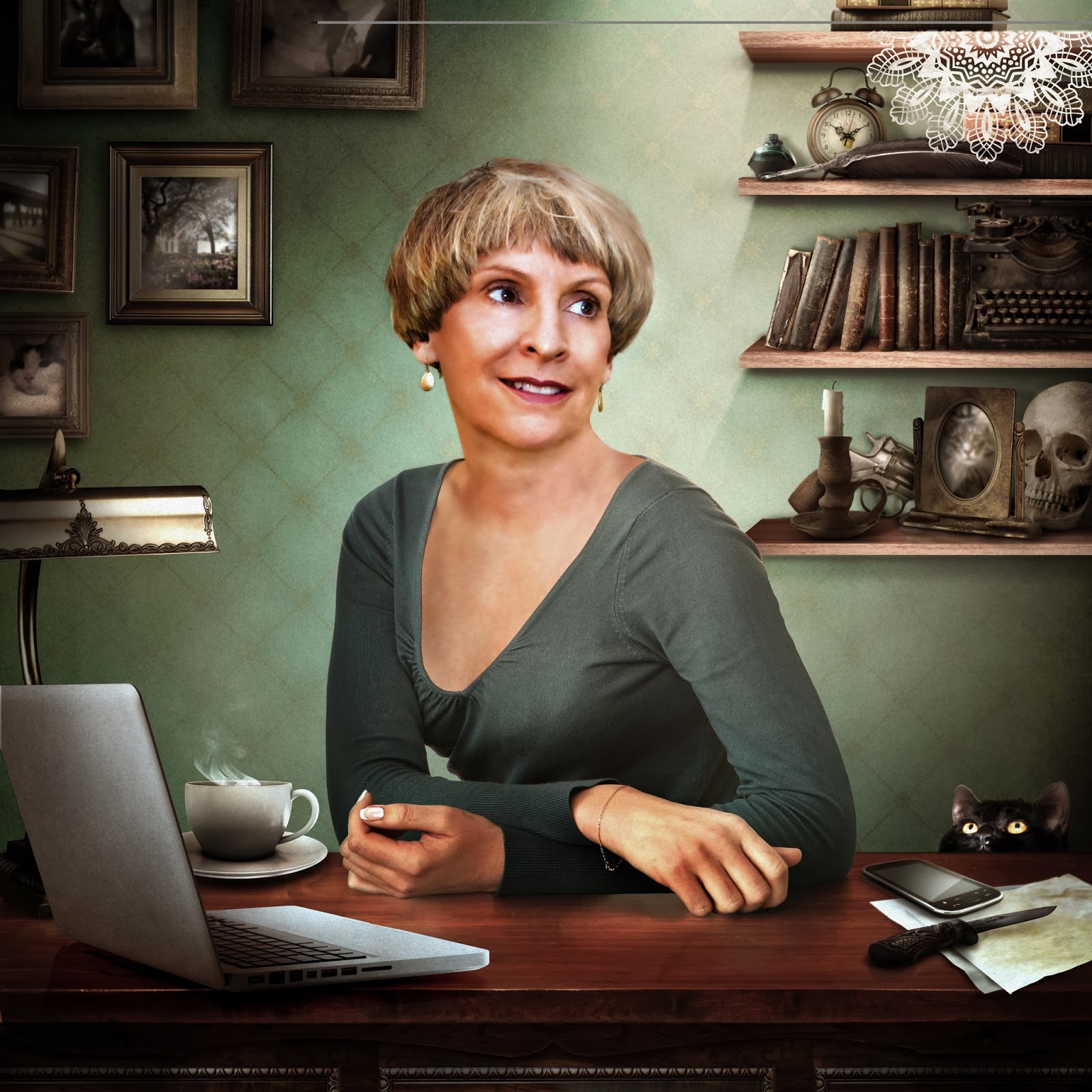 Please join me in welcoming Duffy Brown to Debbie's Book Bag today. Duffy is here promoting her book, Pearls and Poison. Enjoy her guest post and check out the giveaway details for your chance to win.

North vs South…the best food-fight of all.

I’m a foodie. Guess that’s why I’m on a forever diet. Didn’t say I kept it, just that I was on it.
I live in Cincinnati, where North meets South…or North is separated from  South, depending on your point of view. If it’s fireworks over the Ohio River or rooting for the Cincinnati Reds, we meet. If it’s food…not so much.  For example, in Cincy we get iced tea. If we cross the Ohio River, a whopping one-minute drive away, we get sweet tea. You can’t get sweet tea in Cincy. Ask for it at a restaurant and they hand you a packet of sugar.
In Cincy we grill. Over there, they have a cookout. Cincy does steaks and brats and this stuff called goetta (we’re just a little bit German, you see.) On the other side it’s barbecued pork that’s shredded, diced, sliced or pulled.
My mother used Crisco back-in-the-day; my husband’s mother had pan drippings on her stove. I ate pasta and Dave had grits. My vegetables were green beans and zucchini, Dave had fried green tomatoes, corn pudding and mint Julep (hey, that’s green, right).
I never did convince Dave that grits is not a food-group unto itself and praline pecan pie truly is not a breakfast food.  When we married we always had hush puppies for Sunday dinner and Moon Pies are still in the snack drawer. Sushi is and always will be bait, granola is squirrel food, bone suckin’ sauce is what his daddy put on the ribs, and no, Dave, a spice rack is not my thirty-six Bs.
The Ohio River is not very wide, I mean people swim across the thing. My mother-in-law made the best fried chicken on earth and her sweet potato pie was to die for. My mom made a great spaghetti sauce and the only thing fried was an egg and that goetta stuff.
The first thing my mother asked me about Dave when she thought we were getting serious was How much does he make. The first thing my mother-in-law asked Dave was Who did you say her daddy was.  My father followed the NFL, Dave’s daddy was NASCAR. I was taught to mind my own business, Dave was taught to mind his manners. You get the picture.
I’d like to think that our marriage is a blending of North and South.  Our kids mind their manners and their own business but Moon Pies, peach cobbler and fried chicken are the foods of the gods. Granola never stood a chance.
Are you Northern cuisine or Southern good-cooking? Tex-Mex, California healthy or Midwest steak and potatoes? What’s your favorite dish and where did you get the recipe? 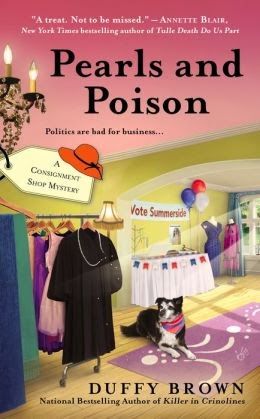 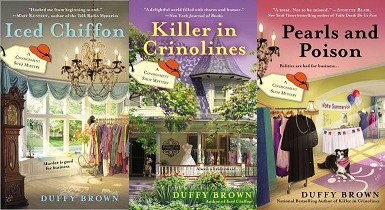 Excerpt from Pearls and Poison, courtesy of Amazon's look inside feature.

It’s election time in Savannah, Georgia, and Judge Guillotine Gloria—aka Reagan Summerside’s mom—is neck and neck in the polls with Kip “Scummy” Seymour.  But the already dirty campaign is about to get downright filthy—with one candidate getting buried six feet under… With her strong opinions and knack for getting into trouble, Reagan is not an ideal volunteer for her mother’s alderman campaign. Plus, she’d rather be running her consignment shop, the Prissy Fox, and eating doughnuts with her dog, Bruce Willis. But when her mother’s opponent, Kip, is found poisoned and her mother is pegged as a suspect, Reagan nominates herself as lead murder investigator. Reagan is intent on finding Kip’s killer and clearing her mother’s good name, but she soon finds herself on the bad side of Kip’s enemies-turned-suspects. This time, no amount of costumes and makeup can keep her inconspicuous and out of danger. Because the closer Reagan gets to the truth, the hotter things get…

Duffy Brown brings readers the third installment in her Consignment Shop mystery series, Pearls and Poison. If readers are looking for a book with a lot of old style Southern charm, witty dialogue and characters that are both over-the-top and lovable, this is the book they were meant to read. Brown does an amazing job of making every word count. Her prose flows well and her skills with dialogue are exceptional. She uses humor to lighten the mood and red herrings to deepen the mystery. A great new whodunit, in a well established series!

Duffy Brown has a lot potential. The consignment shop series, is quickly becoming one of my favorites for several reasons. I love the Savannah setting. It has that nostalgic feeling of the old South, where women wore dresses that were ten miles wide and the men were always courteous and helpful. It gives off a vibe that makes the reader feel like they've been transported back in time. There are just some cities that evoke that kind of feeling and Savannah is one of them. Brown uses that to her advantage in this series in the characters she has created and in the places she allows them to go. Atmosphere is really important in a good cozy and this one has it in spades.

Once again Brown astounds with her dialogue skills. Pearls and Poison is a very character driven novel and the interactions between characters are essential to making it work. Brown uses snappy, witty dialogue and banter that is engaging and seeks to draw the reader in. Usually, the dialogue is the part that slows down the book. It mires it in too much detail and information that's not necessarily helpful in moving the plot forward, not so with Duffy Brown's writing. The dialogue is what makes this novel sing. It shows humor and emotion and all of the things that make this series so good.

Reagan is a great character and lead for this series. She has a mind of her own and she isn't afraid to use it. She gets herself into some serious situations with her overly analytic mind but she manages to get herself right back out again. She's a recent divorcee and shows a lot of heart in trying to make her consignment shop a success and she can't help but find her ex-husband's lawyer a bit attractive. I love the way that Brown writes Reagan. She's tough but she's got a heart of gold. She might be trying to figure out if you're the killer, but she does it with style. Just an all around great character. Looking forward to seeing where personal life goes, just as much as her amateur sleuthing.

This one had a great plot line. Reagan's mom is running for office and her opponent ends up dead. I felt like the idea was good and there were plenty of suspects, but the mystery aspects of the story were a little light. Brown uses humor a lot in her writing and generally that's a good thing, but in this one I think it took a little bit away from the seriousness of the election and the murder. Brown needs to strike a good balance between the two sides of the book in each novel in the series and the balance was slightly off in this one. Not a deal breaker though, I still loved it.

This is a very well written addition to the series. A lot of Southern charm, a dose of humor and a good old fashioned whodunit. If you are a fan of the series, you have to read it. If you're not, you've got to try it!

Pearls and Poison is available NOW from your favorite bookseller.


Duffy Brown is the author of the Consignment Shop Mysteries, including Iced Chiffon and Killer in Crinolines. She loves anything with a mystery. While other girls dreamed of dating Brad Pitt, Duffy longed to take Sherlock Holmes to the prom. She has two cats, Spooky and Dr. Watson, and works at a consignment shop when she’s not busy conjuring up whodunit stories.

The publisher is sponsoring a giveaway for one copy of Pearls and Poison by Duffy Brown.

~ You must be an email subscriber to participate.
~ US Addresses only.
~ The deadline to enter this giveaway is Midnight EST, March 19th.

1. Please leave a comment describing a great consignment shop find that you've made.
2. Please fill out the FORM.

A wonderful purse which I treasure. saubleb(at)gmail(dot)com

I don't shop in many consignment shops as my ocd kicks in and I just can't but I love reading about other peoples finds.

I found name brand jeans and pants in tall sizes for 1.99.

When my kids were little I used to get them great name brand clothes at the consignment shops. They always were dress in gymboree or Disney stuff and they loved looking great. Too bad they won't go for the consigneement shops as teens....

I bought a very nice jacket.

I just found my son a brand new $350 coat for $8. I was thrilled beyond belief because we are a single income family and our budget is so very limited.

No consignment shops in this town, as far as I know. When I was in college there used to be a great bargain store where we got Jeans though. Sadly that place is gone now.

sadly, I've never been to a consignment shop......

My LA Woman dress from consignment shop in Indiana while on vacation from my home near LA.

I have found some basic things on occasion, but nothing too spectacular on its' own. I guess a favorite thing I got once was a small leather purse I used when we travel.

I haven't found any consignment shops where I live.

I usually go to thrift stores rather than consignment shops (not sure if we have them around here). I have gotten some great old dishes there and some good books, too.

I found some homemade lotion at a consignment shop and I love it!
Thanks for the chance to win!