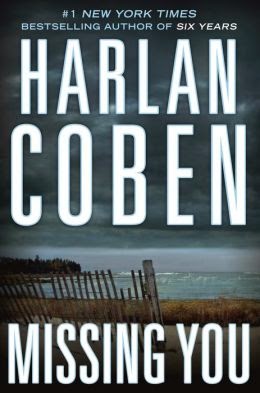 Missing You by Harlan Coben

Excerpt from, Missing You, courtesy of the author's website.


From #1 New York Times bestselling author Harlan Coben, a heart-pounding thriller about the ties we have to our past...and the lies that bind us together.
It's a profile, like all the others on the online dating site. But as NYPD Detective Kat Donovan focuses on the accompanying picture, she feels her whole world explode, as emotions she’s ignored for decades come crashing down on her. Staring back at her is her ex-fiancé Jeff, the man who shattered her heart—and who she hasn’t seen in 18 years.Kat feels a spark, wondering if this might be the moment when past tragedies recede and a new world opens up to her.  But when she reaches out to the man in the profile, her reawakened hope quickly darkens into suspicion and then terror as an unspeakable conspiracy comes to light, in which monsters prey upon the most vulnerable. As the body count mounts and Kat's hope for a second chance with Jeff grows more and more elusive, she is consumed by an investigation that challenges her feelings about everyone she ever loved—her former fiancé, her mother, and even her father, whose cruel murder so long ago has never been fully explained. With lives on the line, including her own, Kat must venture deeper into the darkness than she ever has before, and discover if she has the strength to survive what she finds there.

Harlan Coben stands atop the heap as one of the best known mystery and suspense writers in the business. His latest book, Missing You, is a gritty cop drama set against the backdrop of current headlines. Online dating has become all the rage, but it is just too easy to take the hopes and dreams of lonely people and turn them into a scam which ends up in murder. This is a hard-nosed, riveting story with so many twists and turns the reader might need a road map. Coben astounds with his parallel story lines and ties everything up in neat package in the end. Mystery and suspense at it's best!

Harlan Coben is a big name in mainstream mystery and thriller writing. His titles have seen a lot of attention and justifiably so. He writes with a kind of inner radar that hones in on the issues that readers already have on their minds. Current headlines and little things that just make you wonder are the themes of his books. His books feel real and they don't sugar coat the facts or the fiction about the subject.

Let's face it, the dating game has changed. Meeting someone online is no longer an unusual thing. It's common. And with it comes a lot of problems that dater's never had to think about before. "Is that picture really what he/she looks like?" "Does this person really have that job and live in that town?" "Is he or she married?" and unfortunately, "Could this guy/gal be after something more sinister than true love?" The online dating theme was spot on in this novel. Coben treats it like what it is... and everyday occurrence that could be fraught with a whole lot of danger. I thought his portrayal of the landscape of online dating was masterful. He pulls the reader into this world of conspiracy and murder and he doesn't let go. Amazing!

Kat Donovan is a woman after my own heart. She's been knocked around a little bit when it comes to love and she isn't sure she wants to get it right. She's tough, a little intimidating and set in her ways. Is is worth it, to lose her independence to some guy? But she still wishes she had someone to come home to. Those are the people that scammers prey on. The ones who have almost lost hope, but that little glimmer they can latch on to exists. I loved the way Coben wrote this no-nonsense character who was tough on the outside, but had a gentle heart within.

The twists and turns in this book were one right after the other. There were several parallel stories running at one time and reader is sifting back and fought between them wondering how they tie in throughout the book. But everything from an 18 year old murder case involving Kat's father, to a wayward ex-fiancee, to a teenagers worry about his mother's activities, ties in, in a big way. Coben has a way with working it all out and letting the puzzle pieces fall into place when the he nears the conclusion. I never feel disappointed and most of the time even if I have figured out what's going on, it's all about the journey. This was a great one, by a real master in the genre.

Big conspiracies and murder plots can be so convoluted and drawn out so far that they become impossible scenarios. I think this one may have gotten a little close to the line, but it didn't quite go over. It was plausible, if just so. But that didn't change the fact that it was an exciting and engrossing novel.

If you've never read a Harlan Coben I suggest you fix that as soon as possible. If you like the kind of book that makes your heart beat speed up and your palms sweat, this is it. Great ready, because it's a real thrill ride.

Missing You is available NOW from your favorite bookseller. 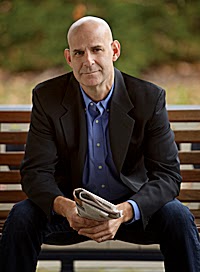 HARLAN COBEN is the internationally bestselling author of more than twenty previous novels, including the #1 New York Times bestsellers Six Years, Stay Close, Live Wire, Caught, Long Lost, and Hold Tight as well as the Myron Bolitar series and more recently, a series aimed at young adults, featuring Myron’s nephew, Mickey Bolitar. The winner of the Edgar, Shamus, and Anthony Awards, he lives in New Jersey.
Posted by justpeachy36 at 11:00 AM