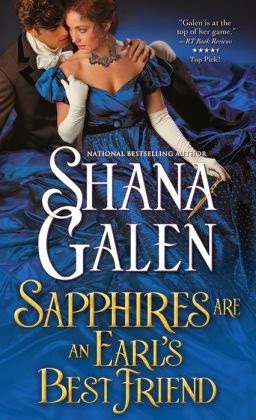 Jewels of the Ton

1. When You Give a Duke a Diamond
2. If You Give a Rake a Ruby
3. Sapphires are an Earl's Best Friend 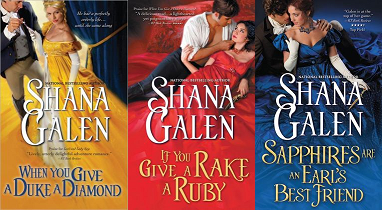 Excerpt from, Sapphires are an Earl's Best Friend, courtesy of the author's website.


She Wants Him...
She Wants Him Not...
Lily Dawson, dubbed the Countess of Charm by the Prince Regent himself, plays the role of the courtesan flawlessly while her real purpose is spying in the service of the Crown. Her mission now is to seduce a duke to test his true loyalties. She'll do it, even though the man she really wants is Andrew Booth-Payne, Earl of Darlington—the duke's son.
Andrew is furious when he finds himself rivaling his father for Lily's attention. When he uncovers Lily's mission, Andrew is faced with impossible choices. It seems he is destined to betray either his family, his country, or the longings of his own heart...

Shana Galen concludes her Jewels of the Ton series with the final book, Sapphires are an Earl's Best Friend. This series features a group of courtesans that are quite a bit more intriguing than they appear. All three are spies working for the Crown unbeknownst to the denizens of the ton. Galen does a wonderful job of including not only steamy romance, but also fast paced action and humor. The hero in this novel has a some dramatic choices to make that will keep the reader entertained and interested. Galen once again delivers an amazing Regency read!

Though I have not reviewed the other two books in this series, I have read them. Shana Galen has a knack for writing about the Regency era. Her research skills are obvious in every book she writes about the period. In her latest book, Sapphires are an Earl's Best Friend, readers are once again treated to a feast for the senses. They can almost see the gorgeous ball gowns, hear the swords clashing in the fight scenes and smell the sensuous aroma of chocolate. Galen's descriptions are just that precise. One of my favorite things about her writing.

Lily, known as The Countess of Charm is a lot more than meets the eye. She is a spy in the service of the Crown and now she has her eye on a traitor. She may not be a virtuous woman who has never known sin, but she uses her situation to get closer to those who might want to betray the Crown and the Duke of Ravencraft appears to be in her cross hairs. She is a tenacious character that knows how to get what she wants, but she's thrown for a loop when the Duke's son intervenes and tries to keep her from him. Andrew just might be her undoing. I loved the way Galen portrayed Lily. She knew where she fit in the realm of the Ton and she used it to her advantage. She was enterprising and she always got her man. Galen did a great job of making a woman with a bad reputation, an unlikely heroine.

Andrew was a piece of work. He isn't what his father wanted, a disappointment in some ways and he is grieving the loss of his mother. He has a lot on his mind and quite a bit he needs to be redeemed of. He is aghast when he finds out his father is taking up with a courtesan. But he doesn't expect is that he will fall for her as well as his father. What a situation. To be vying for a woman your father is interested in. That would definitely bite. I liked the fact that Andrew admires Lily despite her reputation. Once he finds out what she really is, it makes him think about his own life. In every good romance the partners each want to make each other better. And in Lily, Andrew finds a reason to be a better man. I loved that aspect of the story and thought Galen did a great job with Andrew's character development.

Andrew is faced with an ultimate decision. If is father is really the traitor that Lily is searching for, can he turn against him? Can he turn against the woman he has grown to love. That puts him in quite a mess and the way that Galen works things out, was amazing. I was on the edge of my seat throughout this novel, from the romance scenes, to the fight scenes to those moments of introspection where Andrew must come to terms with what he needs to do. Galen just keeps coming with adventure, page after page.

This book certainly had it's charms and was quite a good read, but I felt like the other two books in the series overshadowed it. The premise was excellent and it had a ton of potential. By itself I probably would have adored it. But I wanted more interaction between Lily and the other women, or perhaps a relationship with Andrew's sister, Emma. The first two books of series, made the friendships between the heroine's more important than this one did.

I liked this book a lot, though I think there were some missed opportunities. Galen does an amazing job with description in any book she writes and the dilemma of the Hero made for lots of harrowing moments. But I missed the female interaction that has characterized this series. Still an very good read though, as is any novel from this author.

Sapphires are an Earl's Best Friend is available NOW from your favorite bookseller.

Shana Galen is the bestselling author of fast-paced adventurous Regency historicals, including the RT Reviewers' Choice The Making of a Gentleman. Her books are published all over the world and have been featured in the Rhapsody and Doubleday Book Clubs. She taught English at the middle and high school level off and on for eleven years. Most of those years were spent working in Houston's inner city. Now she writes full time. She's happily married and has a daughter who is most definitely a romance heroine in the making. Shana loves to hear from readers: visit her website at www.shanagalen.com or see what she's up to daily on Facebook and Twitter.
Posted by justpeachy36 at 11:00 AM