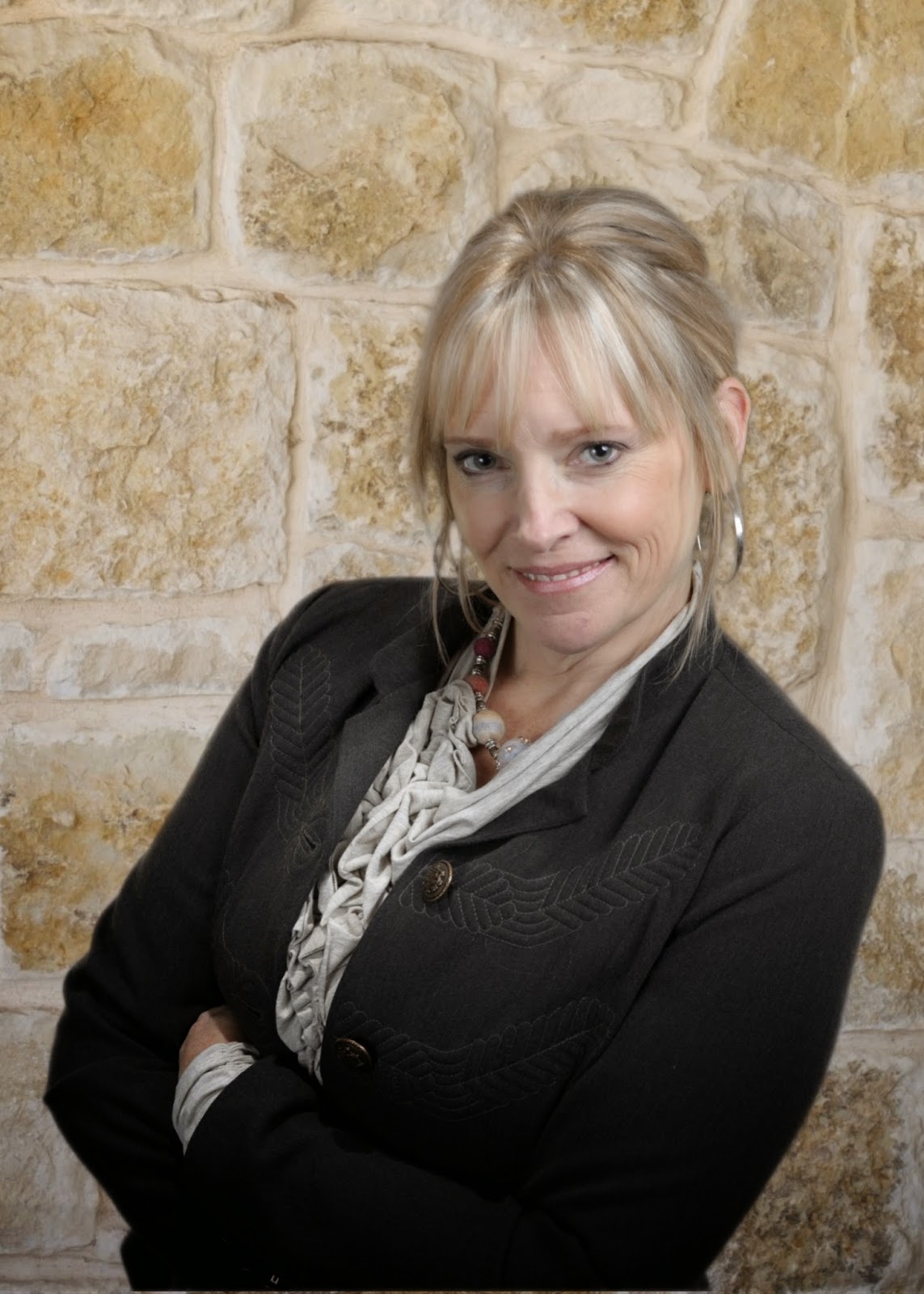 Please join me in welcoming Melissa Bourbon to Debbie's Book Bag today. Melissa is here promoting her fifth book in the Magical Dressmaking Mystery series, A Killing Notion. Enjoy her guest post, along with my review of her book and a giveaway.

Ideas come in all shapes and sizes, and often they come unbidden. They come when you least expect it, and when you’re not looking.

Harlow is the great-great-great granddaughter of Butch Cassidy. In A Magical Dressmaking mystery series, Butch has an alternate history. He still escapes to Argentina, but instead of leaving with Etta Place and the Sundance Kid, he’s got a true love, Texana Harlow, a Texas woman and he leaves her behind (out of necessity, not choice).

But in my history, Texana is pregnant, gives birth to a daughter, Cressida, and just like that, Butch’s lineage continues.  The women call themselves Cassidy because that’s how they’ve always known Butch (although his surname is really Parker). It’s a little creative license I’ve taken.

Back in Argentina, Butch makes a wish in a fountain (a real fountain where wishes are still made) that his descendants will be blessed. That wish becomes the magical charms his female descendants embody. Nana is a goat whisperer. Tessa, Harlow’s mom, has a green thumb. And Harlow sews people’s wishes and dreams into the garments she makes.

So where did all of these ideas for charms came from? Deep in the recesses of my mind. I just knew that Tessa could make things grow, both flowers and weeds. But how to have checks and balances when the weeds get out of control? Nana’s goats, of course. It made perfect sense.

Ideas are everywhere. I never know what will inspire me next, or what story element I’ll weave into the next Harlow Cassidy book… or where that idea will come from.  Usually it springs from my head, fully formed just like Athena springing from Zeus.

A Killing Notion is the fifth book in the series and I’m so excited to share Harlow’s continued journey in Bliss, Texas.  You don’t have to love sewing in order to be spellbound by the series.  I hope you enjoy! 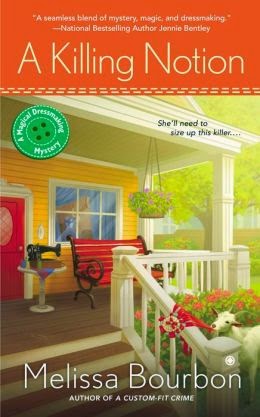 Harlow Jane Cassidy is swamped with homecoming couture requests. If only she didn’t have to help solve a murder, she might get the gowns off the dress forms....   Harlow is doing everything she can to expand her dressmaking business, Buttons & Bows—without letting clients know about her secret charm. When she has a chance to create homecoming dresses with a local charity and handmade mums for several high school girls—including Gracie, whose father, Will, has mended Harlow’s heart—she is ready to use her magical talents for a great cause. But when Gracie’s date for the dance is accused of murder, Harlow knows things won’t be back on course until she helps Gracie clear the football player’s name. If Harlow can’t patch up this mess before the big game, her business and her love life might be permanently benched.

Melissa Bourbon returns readers to Bliss, Texas with her fifth installment in the Magical Dressmakers Mystery series, A Killing Notion. This book will steal the heart of readers who are pulling for the relationship between Harlow and Will to grow into lasting love. Harlow is out to help Will's daughter Gracie prove the innocence of her boyfriend who has been accused of killing his father. Readers are treated to a mystery set against the back drop of the homecoming dance, a ghostly member of the family and plenty of bodies to go around. A great new book from a trusted author.

Melissa Bourbon struck on a really creative idea when she decided to make her main character in the Magical Dressmaking series, a descendant of the infamous outlaw, Butch Cassidy. In Harlow, Bourbon gives readers a lead character who is thoughtful, inquisitive and gifted. Thanks to Butch's lucky coin thrown into a fountain, Harlow is able to sew garments that have the 'wishes' of her customers in mind. Using a few touches of the paranormal, like the special gifts and of course the ghost of meemaw, Bourbon gives this series a light touch that draws the reader in.

In this installment of the series, it's homecoming in Bliss and all of the girls are going to turn out in beautiful dresses. It's a good time for Buttons and Bows with lots of special dresses being made and mums for the dance. Harlow is doing good as well. Her relationship with Will is flourishing and she adores his daughter Gracie, which is exactly what gets her right in the middle of another murder investigation. I liked the way Bourbon gave Harlow a vested interest in finding this killer. This one hit close to home for her since the sheriff's number one suspect was Gracie's boyfriend. I loved all of the descriptions of the dresses and how homecoming was celebrated as well. All great touches in book that centers around sewing as one of it's themes. A great idea.

Meemaw was back as usual and I always love her input into Harlow's cases. The paranormal aspects of this series are always one of the highlights. When I first starting reading the series, I thought Bourbon should have focused on one area of the paranormal and not two, but Meemaw has grown on me and I always find her perspective on things interesting. She sometimes provides comic relief and sometimes just the clarity that Harlow needs to follow her instincts. So, I think the author knew what she was doing with this one, even if I didn't.

I found the fact that Shane was blamed for his own father's death a little disconcerting. It definitely worked into the plot of the story and I can see why Bourbon chose to do it that way. I also know that, that kind of thing happens, but I don't often like to think that way. I still loved the mystery and how it all turned out in the end. Just a little quirk of my own.

This is a great addition to this series. A Killing Notion is probably one of my favorites so far. I loved all of the homecoming hoopla and thought it showcased Harlow's abilities as a seamstress and well has her gift for solving mysteries.

A Killing Notion is available NOW from your favorite bookseller.

Melissa Bourbon, who sometimes answers to her Latina-by-marriage name, Misa Ramirez, gave up teaching middle and high school kids in northern California to write full-time amid horses and longhorns in north Texas. She is the author of the Magical Dressmaking Mystery series (A Custom-Fit Crime, Deadly Patterns, A Fitting End).

The publisher is sponsoring a giveaway for one copy of A Killing Notion by Melissa Bourbon.

~ You must be an email subscriber to participate.
~ US addresses only.
~ The deadline to enter this giveaway is Midnight EST, April 24th.

1. Please leave a comment about your favorite dress or outfit.
2. Please fill out the FORM.
Posted by justpeachy36 at 10:00 AM

A favorite outfit is a black lightweight flared skirt with a white silk shirt. saubleb(at)gmail(dot)com

My favorite outfit, because it is so comfortable, is a pair of sweatpants and my University of Miami sweatshirt!

One of my go-to pieces is a soft, charcoal grey cardigan that you can dress up or down.

jeans and a sweater

I came across your blog today.
Ann

I'm not really a dress person, but I did have a favorite which my Dad made for me for my Uncle's wedding...I loved it!!!
thank you for the giveaway!!!

I like to dress casual...a pair of jeans and a black or a bright colored tee.

I'm a jeans and sweatshirt kind of gal.

I have a dress with a jacket I wear with my boots. I have had the outfit a long time.

I don't have a favorite dress or outfit anymore since I have retired. I love sweatpants or jeans and a pretty t shirt with a soft sweater for colder days. I love comfort!

At 73 my favorite outfit is whatever is cozy and comfortable - and fits!
kpbarnett1941[at]aol.com


My favorite is Lavender pants with a black tanktop shirt, covered by a loose dressy blouse that drapes and no buttons that is thin material in black with large fancy flowers, mostly like the outlines, not solid colors. Love it. I would love to win this book. Sounds good and I'm all for them moving back to Texas. I love cowboys. Maxie mac262(at)me(dot)com

My favorite outfit is a red golf skort with a sleeveless navy blue and white top.
suefarrell.farrell@gmail.com

I don't have a favorite dress or outfit. I like to dress very casually in slacks and a jersey or sweater.

Jeans and a t shirt for me!

My favorite outfit is jeans and a cute comfy shirt.
Thanks for the chance to win!

I have this beautiful high wasted red pencil skirt that I wear with black shirt with sheer shoulder tucked into it and I always feel so pretty while wearing it.

I like comfortable clothes, t-shirts and fleece pants or shorts. My favorite dress is turquoise blue with black flowers that I bought at Kohl's a long time ago. The brand is Villager by Liz Claiborne. I wear it to work.