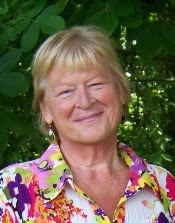 Please join me in welcoming Christine Wenger to Debbie's Book Bag today. Christine is here promoting her second book in the Comfort Food mystery series, A Second Helping of Murder. Enjoy her guest post, along with my review of her book and a giveaway.

It's summer as I write this note to you and the tourist season is in full swing! I thought that things would calm down after my first several months here, but I'm busier than ever and so is my staff.

Moving to New York and buying the Silver Bullet Diner (circa 1950, Open 24 Hours, Air-conditioned, Breakfast Served All Day) from my aunt Stella Matkowski, who retired to Boca Raton, was a big change for me. Things proved even more difficult when the restaurant inspector turned up dead in my kitchen! My beautiful diner became a ghost town overnight!

With the help of my neighbor, Deputy Sheriff Ty Brisco, a cowboy transplant from Houston, Texas, I got to the bottom of what had happened to the inspector. My friend Christine Wenger, who loves to write and fancies herself the historian of Sandy Harbor, documented that horrible part of my life in DO OR DINER (Obsidian Books, August 2013). She said that fiction was stranger than the truth, so the story just had to be told.

And Chris just finished recording the details of two more murders which occurred in town about twenty years apart in A SECOND HELPING OF MURDER (Obsidian Books, April 2014). The scene I discovered in Cottage Number Eight will be forever etched in my mind. The lovely citizens of Sandy Harbor are starting to wonder about me!

In spite of the bad stuff, I've kept busy cooking and playing with recipes at the Silver Bullet, have almost stopped reeling from my divorce (almost!), made life-long friends, never laughed so much, and still find time to polka!

Life is good at the lake. Come visit! 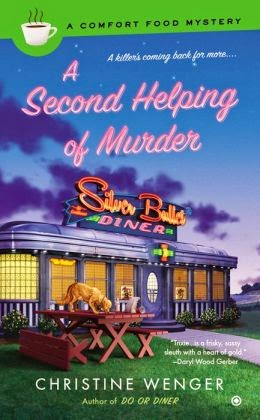 1. Do or Diner
2. A Second Helping of Murder 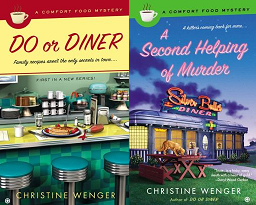 Trixie Matkowski is warming up to running her family’s diner in the small town of Sandy Harbor in upstate New York. But the only thing more demanding than serving up piping-hot comfort food twenty-four hours a day is getting to the bottom of a double homicide....
Trixie fondly remembers summers as a child spent visiting the shores of Lake Ontario. Not much has changed—there are still vinyl booths at the Silver Bullet Diner, families eating home-cooked comfort food, and days of swimming in the lake.But before Trixie can say “Order’s up,” someone’s summer is abruptly cut short. One of the cottage residents is found dead, and Trixie suspects the crime might be linked to an unsolved disappearance in the picturesque town’s past.As Trixie works with Deputy Ty Brisco to solve both mysteries, their shocking discoveries will shake up the small town. And when word gets out that she’s on the case, Trixie’s in trouble—after all, the murderer won’t spare her life just because she makes a killer corned beef sandwich....

What's up with Cottage Number Eight? Readers are returned to Sandy Harbor, New York with Christine Wenger's latest book in the Comfort Food Mystery series, A Second Helping of Murder. With the tourist season upon them, Trixie and the gang from the Silver Bullet are gearing up for Cottage rentals on the lake as well as more great food from the diner. Readers are treated to a twenty-five year old murder along with a current one, that are intertwined in an amazing whodunit. Wenger does it again with this great new installment to the series!

Christine Wenger's first book in the series, Do or Diner was a good book. It introduced readers to the small town of Sandy Harbor and to new cozy mystery heroine, Trixie Matkowski and her diner, the Silver Bullet. I was interested to see where Wenger took the series with her latest book, A Second Helping of Murder. I was not surprised to find Wenger's great descriptive prowess at work. I could almost smell the delicious smells coming from the Silver Bullet, even though the majority of the mystery focused on the lake side cottages that Trixie is renting. I loved the way the setting conveyed the perfect seasonal getaway, minus the murder of course.

Trixie is once again in the middle of a mess. Just where readers expect a good amateur sleuth to be. Not only is a missing persons case from Sandy Harbor's past solved when a body is found in a local cave, but a gunshot takes out a customer renting the same cottage as the fateful family. Are the two related? It's up to Trixie to figure it out. I loved the way the two murders seem to be connected but the reader isn't sure exactly how. And the suspects are drawn from the friends and people who may have known the first victim. I thought Wenger did a great job of using Trixie's natural inquisitiveness to get her involved in the case, since she is losing more money because of the publicity. A great tactic used to the heroine's advantage.

Once again the small town setting for this series was perfect. A town set on the shores of Lake Ontario was very believable as a tourist town and the setting for a double murder of sorts. Wenger keeps the reader just off balance enough to keep them flipping the pages, as Trixie sorts through the clues to find the killer. I liked all of the interaction with the townspeople and the gang from the diner. I don't think this heroine knew was she was in for when she took over the family business. She's a real go-getter and fans of the series will love the way she looks at the world, through the eyes of an amateur clue finder.

The mystery itself was very entertaining. I admit to being clueless as to who the killer was until the very end. There were just so many to choose from. The whole thing was just 'fabulous' one of Trixie's favorite words to describe just about everything. I liked the way she used a few red herrings to throw readers off the trail of the real killer, but still kept things so close to the truth it was hard to tell the difference. Wenger knows how to draw it all out and make the reader yearn for more when it's over.

Repetitive wordings doesn't always bother me. Sometimes it just becomes a characteristic of the character and I just think of it as one of her or his idosencracies and don't pay it much mind. But when more than one character starts to use the same turn of phrase or words, it starts to become an issue. It hasn't gone that far yet with 'fabulous', but it's getting there.

Despite the word issue, this was a great novel and second book in the series. Fans who love good food and a good mystery can't go wrong with this series, set in a small town diner. Wenger knows how to describe things in such a way that the reader feels like they are right there with the characters sorting it all out. You gotta read it!

A Second Helping of Murder is available NOW from your favorite bookseller.

Christine Wenger has worked in the criminal justice field and written romances for Harlequin. She’s always loved to read cozy mysteries, and is thrilled to bring the beauty of upstate New York to life in the Comfort Food Mystery series (Do or Diner).

The publisher is sponsoring a giveaway for one copy of A Second Helping of Murder by Christine Wenger.

~ You must be an email subscriber to participate.
~ US addresses only.
~ The deadline to enter this giveaway is Midnight EST, April 22nd.

1. Please leave a comment about what you think of culinary cozies vs. other kinds of cozies.
2. Please fill out the FORM.
Posted by justpeachy36 at 10:00 AM

The first culinary cozy I read was by Diane Mott Davidson. I loved it. Culinary cozies make you feel so at home when brownies or cookies are being baked.

All cozies are great but with culinary cozies you can get recipes, too.

I enjoy all types of cozies........but of course, with culinary cozies, there are recipes to try!!!

I crave all kinds of cozy mysteries!


I have great recipes in the back of my books from "Family and Friends of Trixie Matkowski"!!

And I have such a great time writing cozy mysteries. It's almost as much fun as eating pierogies!!

Thanks to Deb's Book Blog!

I pretty much like all kinds of cozies, but do enjoy the recipes in all of the 'food' ones!

I love culinary cozies! The recipes are always fun!
Thanks for the chance to win!

the recipes are nice

I enjoy all cozies - they are just fun to read. I do like the recipes in the food ones though.

I like all cozies. The characters are great, it's fun reading.

I love food cozies the most, especially the ones that feature comfort food. I am diabetic so I can't indulge much so at least I can enjoy the foods vicarously.

Food cozies can take the stories in so many more directions and locations - and the recipes are fun to read and see how they fit in.
Cozies in general have such wonderful characters!

I like some food cozies but also cozies with a craft theme (knitting or craft shop, etc.) I read the first book in this series. I do enjoy the recipes in cozies, especially Joanne Fluke's.

My favorite cozies are cat cozies with food cozies coming in a close second.
suefarrell.farrell@gmail.com

I really like them both. I enjoy reading about the food in the culinare cozies. Thanks for having the giveaway.

Culinary cozies are some of my favorites. It's really fun to read about food influencing others' lives, and it's great when recipes are included.

Culinary cozies are great. I enjoy the recipes too.