Review: How to Woo a Reluctant Lady

Excerpt from How to Woo a Reluctant Lady
Book Trailer:

When a charming rogue proposes she marry him to meet her grandmother's ultimatum, the Sharpe clan's strong-willed sister makes a tempting counter-offer that preserves her inheritance and ignites his imagination.

Lady Minerva Sharpe has the perfect plan to thwart her grandmother's demands: become engaged to a rogue! Surely Gran would rather release her inheritance than see her wed a scoundrel. And who better to play the part of Minerva's would-be husband than the wild barrister Giles Masters, the very inspiration for the handsome spy in the popular Gothic novels she writes? The memory of his passionate kiss on her nineteenth birthday has lingered in Minerva's imagination, though she has no intention of really falling for such a rakehell, much less marrying him. Little does she know, he really is a covert government operative. When they team up to investigate the mystery behind her parents' deaths, their fake betrothal leads to red-hot desire. Then Minerva discovers Giles' secret double-life, and he must use all the cunning tricks of his trade to find his way back into her heart.

Bestselling historical romance author Sabrina Jeffries gives us another novel about the wildly popular Sharpe family. Minerva's story, How to Woo a Reluctant Lady is the third book in the Hellions of Hallstead Hall series, featuring five siblings given the ultimatum to marry within a year or loose their inheritance. Jeffrie's ingenious storytelling will have readers on the edge of their seats with this one.

Minerva Sharpe has vowed never to marry. As a writer of Gothic novels, Minerva knows that any self respecting man will not allow her to continue to write. Minerva was once in love and she fashions the heroes of her stories which appear in a ladies magazine after that man, a friend of her brother, Jarrett. When Giles Masters re-enters her life, she is ill prepared for the feelings that surface. Giles has followed Minerva's career and when she places and ad for a suitor he is quick to apply for the job. He wants to help her thwart her grandmother's demands that all the Sharpe brothers and sisters should marry by the end of the year. But, Minerva has other plans. Can love bloom better the wild barrister and the reluctant lady?

I was really looking forward to the third book in the Hellions of Hallstead Hall series. The first two books were exceptionally well written about a family that had captured the interest of readers across the country. How To Woo a Reluctant Lady was certainly not a disappointment. I believe it is my favorite in the series to date. Jeffries once again gives the reader a cast of characters that will keep them interested to the last page and beyond.

Minerva's character really comes into her own as the heroine of this book. I found Minerva interesting from the first book for several reasons. She has a personality that makes her seem a little stand-offish or stuffy, but when the reader begins to learn more about why she acts that way they have to fall in love with her. I loved the fact that she was a writer and that she used the love of her life as pattern for her heroes. Though Minerva has no idea that Giles really is a spy, the character she creates is a spy as well, which leads to a bit of trouble. I loved her character, she's smart and full of tenacity and spunk.

The author fills us in a little bit more about the circumstances revolving around the death of the Sharpe parents. I was really glad when Giles and Minerva start to investigate their deaths, because this has been a mysterious aspect of the series so far. Supposedly, Minerva's father killed her mother in a fit of anger and them himself, but there has always been something strange about it all. I enjoyed finding out more about what really happened in this book.

Giles is the perfect hero. A little on the wild side, which appeals to those of us who enjoy a good bad boy, and still very strong and intelligent. As a barrister he appears to be the consummate rake, but that is only a mask, his real profession as a spy is what makes him mysterious and full of brash masculinity. He is a character that will appeal to many readers. The heat between Minerva and Giles is almost palpable. It sizzles off the pages and the reader will find it hard to wait until all the passion explodes.

I really enjoyed this novel and the series as a whole so far. Can't wait for the next one. You will definitely want to check this one out, if you enjoy historical romance. These two make quite a pair. I recommend it to anyone who loves a good romance.

How to Woo a Reluctant Lady is available NOW from your favorite bookseller. 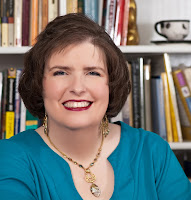 By the time Sabrina Jeffries was eighteen, she'd eaten chicken heads and jellyfish, been chased by a baby elephant seen countless cobra's and pythons, had the entire series of rabies shots, and visited rain forests and rubber plantations. But that wasn't enough excitement for her; to escape her mundane life as a missionaries daughter, she read romance novels.
Posted by justpeachy36 at 1:56 PM