(Received for review from TLC Tours)

In the small village of Edgecombe St. Mary in the English countryside lives Major Ernest Pettigrew (retired), the unlikely hero of Helen Simonson's wondrous debut. Wry, courtly, opinionated and completely endearing, the Major leads a quiet life valuing the proper things that Englishmen have lived by for generations: honor, duty, decorum, and a properly brewed cup of tea. But then his brother's death sparks an unexpected friendship with Mrs. Jasmina Ali, the Pakistani shopkeeper from the village. Drawn together by thier shared love of literature and the loss of their spouses, the Major and Mrs. Ali soon find their friendship blossoming into something more. But village society insists on embracing him as the quintessential local and regarding her as the permanent foreigner. Can their relationship survive the risks one takes when pursuing happiness in the face of culture and tradition?

Helen Simonson's debut novel Major Pettigrew's Last Stand offers readers a look into some very big societal issues. With a tender hand Simonson lets the story of Major Pettigrew's relationship with a Pakistani shopkeeper develop and change in response to the racism and censure they face as a couple. Readers will fall in love with Major Pettigrew from the first page, enjoying his lust for life and his ability to stand against the pressures of the world around him.

Major Pettigrew is the perfect Englishman or so the members of the village of Edgecombe St. Mary believe. Until he begins a friendship with Mrs. Ali, a local shopkeeper. The fact that Mrs. Ali is Pakistani makes her a foreigner in their eyes. She isn't one of them the way the Major is. But Major Pettigrew isn't afraid to go against the grain and his relationship with Jasmina turns from friendship to love despite the best advice from the ladies circle and the Major's golf buddies. The couple faces racism and censure from most of the village including their families, who are shocked at their choices. Will their love be consumed by turmoil or will it stand the test of time?

There are many things about Simonson's debut novel that I really enjoyed. This is a very unconventional love story. Ernest Pettigrew and Jasmina Ali are not spring chicken's, both of the characters are older and prove that love can be found at any age. This aspect of the story was very compelling and will appeal to wide range of readers from any age.

Simonson's novel is character driven and her characters really shine. Major Pettigrew appears to be the perfect English gentleman, and throughout the story we see the grit and determination that is synonymous with the British. But there is more to the major than meets the eye. He is a very moral and upstanding man, and shows a great vulnerability as he tries to be a decent person even after he has failed miserably. I enjoyed his dry humor and sarcasm and I thought his attitude about life was wonderful. I also liked hearing about his former wife in his recollections. He seems to have jumped into love with Jasmina wholeheartedly, just as he loved his first wife. He is a very engaging character and full of surprises.

Mrs. Ali, Jasmina comes across as very scholarly and wise. Her family believes that she should retire and settle into a life that fulfills what they believe her role in the family should be. Even though she feels she has these family obligations it's easy to see that she has ideas of her own about how she will fulfill them. Her relationship with Ernest seems very pure and real and readers will find her a joy to read. She has flair and imagination and she is very different from what English women are. Which is in a way what the villagers dislike about her. She isn't just like everyone else. She's unique and she isn't afraid to let that shine.

Simonson deals with some big issues including racism and prejudices. She shows that these issues exist in just about every culture. I found it interesting how the Major and Mrs. Ali were able to combat these influences and to stand up for themselves and their right to choose who they wanted to be with. I think this novel is about being decent and understanding to everyone around you and not just those who are conformist and go with the flow. I love the way the author uses supporting characters like Roger the Major's son and Abdul, Jasmina's nephew to bring depth to the subject. This is a great book with a serious subject. 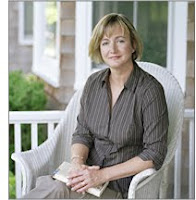 Helen Simonson was born in England and spent her teenage years in a small village in East Sussex. A graduate of the London School of Economics and a former travel advertising executive, she has lived in America for the last two decades. A longtime resident of Brooklyn, she now lives with her husband and husband and two sons in the Washington, D.C. area. This is her first novel.

I'm so glad you enjoyed this one - it seems like a wonderful story, one with some deep undertones for sure! I can't wait to read it myself ... I know I'm going to love it.