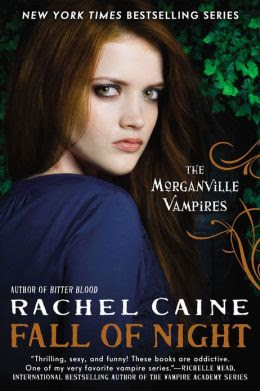 Fall of Night (The Morganville Vampires - Book 14) by Rachel Caine

(Received for an honest review from NAL hardcover)

Excerpt from Fall of Night courtesy of Rachel Caine's webpage

For years, the human and vampire residents of Morganville, Texas, have managed to co-exist in peace. But now that the threat to the vampires has been defeated, the human residents are learning that the gravest danger they face is the enemy within…
Thanks to the eradication of the parasitic creatures known as the draug, the vampires of Morganville have been freed of their usual constraints. With the vampires indulging their every whim, the town’s human population is determined to hold on to their lives by taking up arms. But college student Claire Danvers isn’t about to take sides, considering she has ties to both the humans and the vampires.
To make matters worse, a television show comes to Morganville looking for ghosts, just as vampire and human politics collide. Now, Claire and her friends have to figure out how to keep the peace without ending up on the nightly news…or worse.

Rachel Caine's Morganville Vampire series is a staple when it comes to paranormal young adult fiction. Caine's 14th book in the series, Fall of Night takes the action outside of it's normal realm and possibly takes the series in a new direction as well. Caine is known for her extreme plot twists and this book is no exception to the rule. Readers will be on the edge of their seats wondering what will happen next as Caine deftly weaves a story that will leave them feeling sated and excited at the same time.

Rachel Caine has long been a favorite of mine. I don't review a lot of Young Adult fiction, because most of the publishers I work with are in different areas, but when I do review YA books, I try to pick the best of the class so to speak and the Morganville Vampire series certainly fits the bill. Fall of Night is one of those novels that changes the tone of a series. Readers have come to love Morganville, Texas, the town, the people, just the overall atmosphere of what could be considered a small town vampire community. But in this book, the action isn't taking place in our beloved Morganville.

Claire has been accepted to MIT and when she goes off the school the small town feel of Morganville is left behind. Some readers will like the change of pace, others will probably not be too happy about it. But I think it's often needed in a long lived series. Sometimes you gotta shake things up a little bit and I believe that was Caine's intention. It certainly changes the whole attitude of the book. It could be a new direction entirely for the series. Considering this is the 14th book, maybe that's a good thing. We'll have to wait and see.

Once again Caine has written a novel that is complex and thrilling and has all the suspense of a good mystery combined with all the paranormal characters readers are expecting. But with Caine, you just never know what you're gonna get. Her plot twists are legendary and Fall of Night has some unexpected ups and downs that I would have never dreamed up. I'm glad that's why we have authors like Rachel Caine. Readers will be blown away by the action and the adventure in this novel, but also by the sultriness and the nuances that Caine weaves into the story. She is an author that is so good and making the little things noticable, the way one character looks at another or the background sounds. She makes the story come alive.

This is a series and a book that I would recommend to any person who enjoys YA fiction. Caine is definitely a powerhouse when it comes to this kind of writing. You can't go wrong with a book from any of the series' she has given her name to. Fall of Night is a great addition to the series.

Fall of Night is available NOW from your favorite bookseller. 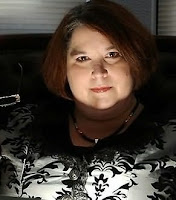 Rachel Caine is the New York Times and USA Today bestselling author of more than thirty novels, including the Weather Warden series, the Outcast Season series, the Revivalist series, and the Morganville Vampires series. She was born at White Sands Missile Range, which people who know her say explains a lot. She has been an accountant, a professional musician, an insurance investigator, and, until recently, carried on a secret identity in the corporate world as a communications executive. She and her husband, fantasy artist R. Cat Conrad, live in Texas with their iguana, Popeye.
Posted by justpeachy36 at 8:00 AM